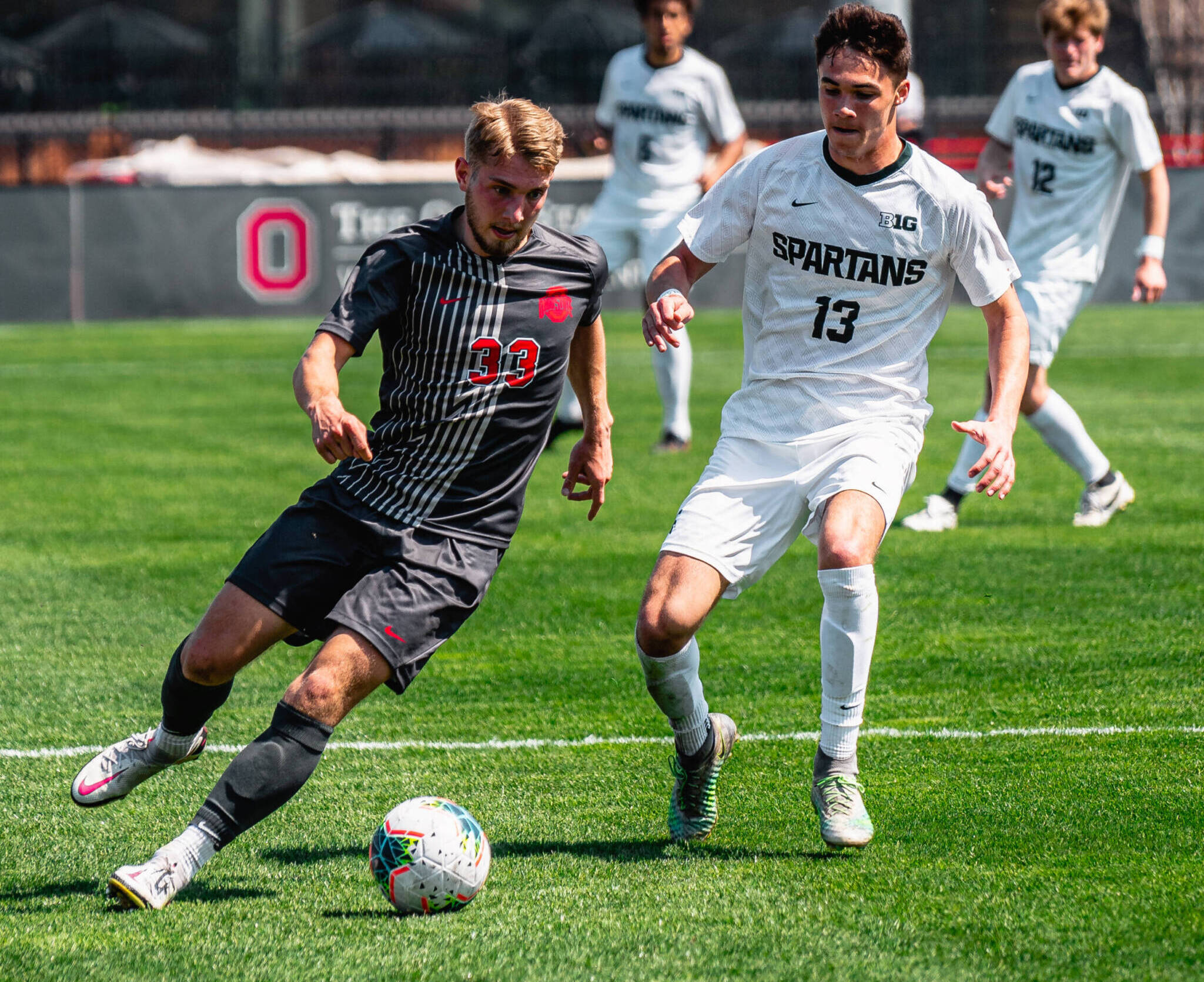 There’s a real sense of grace in Laurence Wootton’s game. The Ohio State men’s soccer midfielder, who just put the closing touches on his first season as a Buckeye, plays the game less like a grinder and more like an artist – a rare quality in the rough-and-tumble Big Ten. He almost floats around the pitch, roaming the Buckeye midfield and slicing through the defense once he senses the opening for an offensive attack, moving with the same decisiveness off the ball that he has on it.

He was tasked with connecting the play between Ohio State’s defensive back four and its attackers, be it as a facilitator, dishing out passes to forward Devyn Etling and the most aggressive of his midfield partners, fellow freshman Parker Grinstead, or as the point man himself. He proved comfortable with the ball at his feet throughout his opening season in the scarlet and gray, dishing out two assists and leading the team in shots (13) and shots on goal (six) despite his positioning.

His lone goal on the season, a strike from just outside of the box on a set piece, couldn’t have been more representative of Wootton’s ability as a player on the whole. Although his shot found the back of the net – or the side of it, rather, as the ball slipped past the goalkeeper to the bottom corner of the far side of the goal – it was actually originally intended as a pass, and a nearly perfect one at that.

Had the intended target, Matteo Bennati, taken the pass in stride as originally planned, it almost certainly would have yielded the same result, but Wootton’s strike was tricky enough that it bounced right past the entire Michigan State defense regardless. That’s just how he plays. Even when things don’t go to plan, Wootton has the kind of creativity and ability to think on his feet that can make an already talented player essentially lethal in attack. When he operated confidently and with his mind on the attack, Wootton was one of the most dangerous players in the Big Ten in 2021.

The Big Ten took notice. At the end of the 2021 regular season, which had seen the Buckeyes stumble even with Wootton improving over the course of the year, he was selected as the Big Ten Freshman of the Year, an All-Big Ten first-teamer and a unanimous pick to the Big Ten All-Freshman team alongside Grinstead. A starter in all 10 of Ohio State’s games, Wootton had no idea that he was in line to claim the honors. In fact, he didn’t know that there were conference honors at all.

“It was a real honor and a real surprise,” Wootton told BSB. “I don’t know the most about how the college system works, so I didn’t actually know that they give out these types of awards, that the Big Ten gives these awards out. We were actually sitting on the bus on the way to Penn State. I had my headphones in and everyone just started clapping. I looked up. I thought someone had cracked a great joke at the front of the bus or something, so I was like, ‘What’s going on?’ They told me, ‘Oh, you got this award.’ I didn’t really know how to take it at first. Then having talked to more people, it was a real nice surprise to end the season. I put a lot of work in, and it’s nice to see that rewarded in some way.”

It may seem strange to imagine a collegiate athlete who doesn’t know about conference awards, but there’s some important background info to know about Wootton: His first season with the Buckeyes also happened to be his first year in America. A native of Halstead, England, Wootton came to the United States to suit up for the Buckeyes after spending his childhood across the pond. It was a year of firsts for him, and being selected for that honor was just another first.

Despite the firsts, and the fact that his first year in a brand-new country was spent under the hefty shadow of a devastating pandemic, Wootton proved to be a fast star for the Buckeyes, which caught even his coaches off guard.

His early comfort on the pitch for the Buckeyes makes sense when you move beyond the shock of a first-year player frequently looking like the most dominant player in the game for either team. Wootton grew up in and around soccer. He was scouted as an elementary school (or, in English parlance, primary school) student, joining the developmental academy for his favorite club, Stoke City, when he was just a kid.

Wootton had an interest in quite a few sports, including rugby, a favorite in his family, but found himself gravitating back to soccer as the one that he both enjoyed the most and felt the most comfortable playing. After all, major English clubs aren’t much for developing players who lack talent. The attention that Wootton drew was well-earned.

“My family’s a big rugby family, so being scouted to play football (soccer), I was seen as a bit of the outcast in the family,” Wootton said. “I played quite a number of sports when I was little and then just constantly kept going back to football, until I got to the age where I had to decide and football’s the one I went for.”

Wootton spent 10 years in Stoke City’s academy and three in Cardiff City’s, but the former didn’t decide to bring him on as a full-time player, so he made the move to Columbus. Once he’s done at Ohio State, he would love to return to his boyhood team, both so that he can don the colors of the club he supports and so that he can appease his competitive nature and show off what Stoke City was missing.

“That would be the dream,” Wootton said of a return to Stoke City down the road. “It’s not the biggest club in the world, but I think I was there for nine or 10 years when I was a youngster growing up, and of course I support them now. It would be the dream to go back there, show them what they missed out on.”

It’s not quite time for that, though. Wootton has three (or four, with the extra COVID year) seasons remaining as a Buckeye under head coach Brian Maisonneuve, and at this point, it’s safe to say that’s just getting started. There was a noticeable adjustment period early on in Ohio State’s season for Wootton to the speed and competitiveness of play, but once he caught on, he looked like a natural.

Now, the hope is that he can work on development. As with everything else, Ohio State’s men’s soccer team was severely hampered by the pandemic and was without the traditional offseason that it would have used to bring its freshmen along and acclimate them into the program. Players such as Wootton and Grinstead had to learn on the fly and hope to only improve with time as their comfort and chemistry grows.

What wasn’t an issue for Wootton, however, was the transition from the English academy system to the American collegiate one. The former is focused much more on development, which he appreciated, but as a tremendously competitive guy, the opportunity to play for trophies and with something on the line appealed immediately.

“It’s been really good, actually,” Wootton said of the transition. “I was speaking to Coach Maisonneuve about this the other day as well. Coming from Cardiff City and the youth system in Britain, it’s all about development rather than playing for trophies and stuff like this, which is good and it helps you progress. Coming to America, it’s all about winning and that’s the best thing for sport. That’s what everyone plays sport for, and certainly having the opportunity to play for a conference title, play in the Big Ten, although we couldn’t do what we wanted, is really refreshing. I’ve enjoyed every second.”

Wootton lights up at any opportunity he gets to talk about competition. He may play with grace and finesse, but he’s nothing if not a hardened and gritty competitor, especially with hardware on the line. He couldn’t help but chuckle when asked about his goals in Columbus, as if he has anything on his mind outside of helping turn the Buckeyes into not just a contender in the Big Ten, but a team that pulls in, in his words “big rings.”

“I love it, I love competing. I wouldn’t want to do anything else. I really want to win some tournaments,” Wootton said. “I wanted to win this year. Unfortunately, the end of the season let us down a bit, but going forward with the team that we’ve got and the stuff that I know that we can do, I think we can definitely win some championships and hopefully get some big rings on our fingers. I look forward to it.”