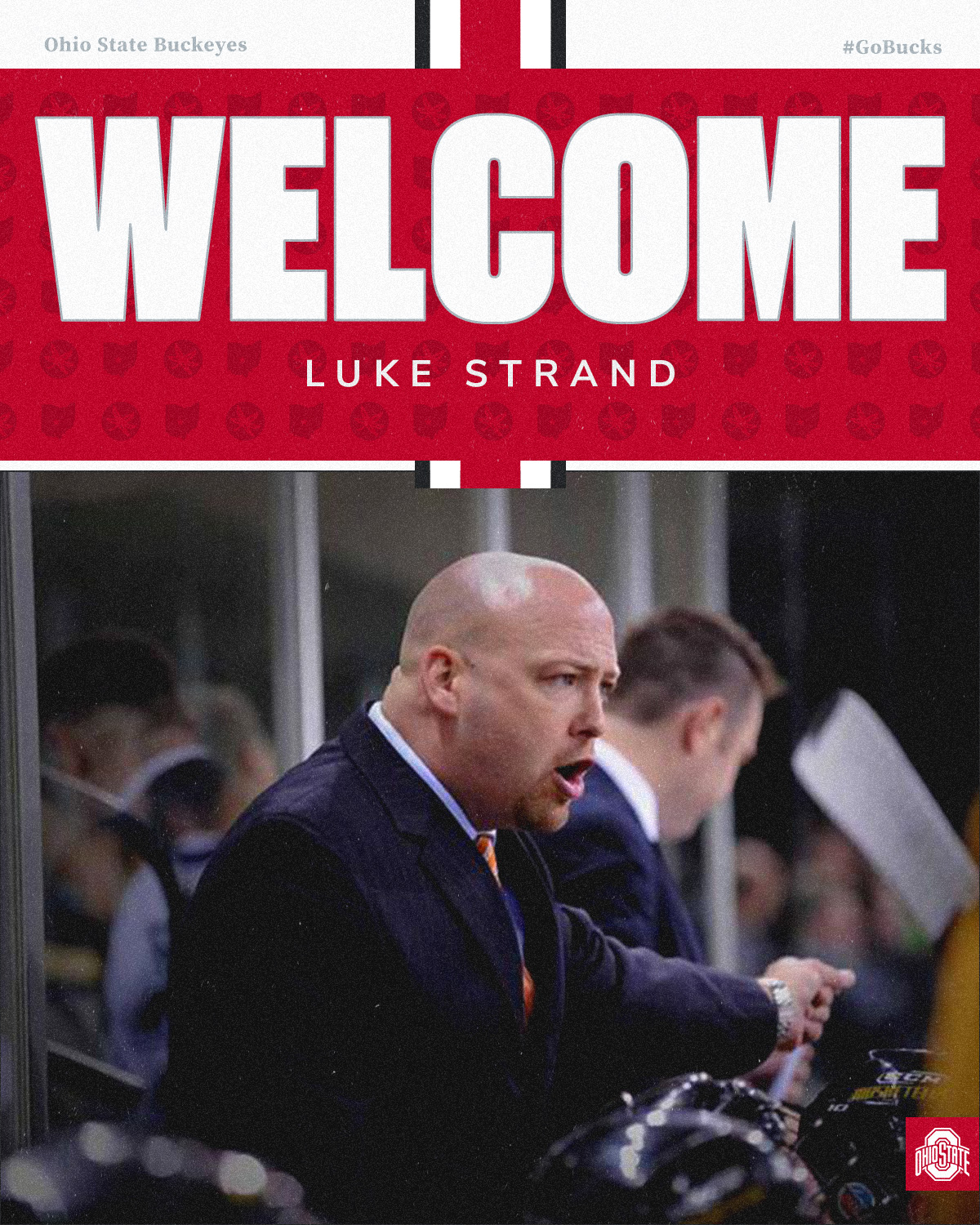 Ohio State men’s ice hockey was looking for an experienced coach with a strong work ethic and passion for the sport at the junior, collegiate and professional levels. They found that in Luke Strand.

Head coach Steve Rohlik announced Friday that Strand would join his coaching staff as an assistant. Strand will bring a tremendous résumé to Columbus, including coaching and scouting stints in the NCAA, the USHL, AHL, NHL and United States National Team.

“We are excited about the addition of Luke Strand to the staff,” Rohlik said. “He has an elite hockey mind and brings a work ethic and passion that will resonate throughout our entire program. Both Luke and Coach Bittner have the ability to communicate and develop players, and that is such an important quality at this level.”

Strand’s most recent coaching experience came in the USHL with the Sioux City Musketeers — a team he led to the 2022 Clark Cup title. His other opportunities in the USHL include stints with the Green Bay Gamblers and Madison Capitols in roles like head coach, assistant coach, general manager and director of operations.

The Wisconsin native’s first stop was in Green Bay, where he was an assistant coach for two seasons from 2003-04 and his first head coaching position was with Sioux City from 2009-11. Strand was also the general manager of the Musketeers from 2013-14, and he returned to the organization as its head coach and director of operations in 2017.

Strand spent a season in the Big Ten at Wisconsin, where he coached with current Ohio State assistant JB Bittner. He also had stops at St. Norbert College and his alma mater, Wisconsin-Eau Claire.

In professional hockey, Strand was an assistant coach in the AHL with the Houston Aeros and Abbotsford Heat. The Aeros won a division title and were conference finalists during his tenure, while the Heat made a trip to the conference finals with Strand on the staff. Stand’s lone year in the NHL was as an amateur scout with the Calgary Flames in 2016-17. Internationally, Strand was on the Team USA staff that won gold at the 2010 World Junior A Championships.

Strand played junior hockey player for the North Iowa Huskies of the USHL before a four-year career at the University of Wisconsin-Eau Claire. At WEC, he was a part of the men’s ice hockey and baseball programs. After college, Strand spent three years playing professionally for the Madison Monsters and Madison Kodiaks.

“Thank you to the leadership at The Ohio State for the opportunity to join their hockey staff led by Steve Rohlik and JB Bittner,” Strand said. “I look forward to continuing to grow the Buckeye hockey program to new heights.

“I love how Ohio State holds athletics and academics to high standards while striving to make the student-athletes even better people. I cannot wait to get started. My time in Sioux City has been very beneficial to teaching young men life and hockey, and I now look forward to this new chapter.”

Ohio State will face five teams in 10 games during its non-conference slate, including three out-of-league contests at Value City Arena inside the Schottenstein Center.

The Buckeyes will start their season against Mercyhurst on Oct. 1-2 before traveling to UConn two weekends later on Oct. 14-15. Ohio State will play its season opener against Bentley on Oct. 20-21. On Thanksgiving weekend, the team will play at Long Island University with the final non-conference competitions coming against Bowling Green on Dec. 16-17 in a home-and-home series.