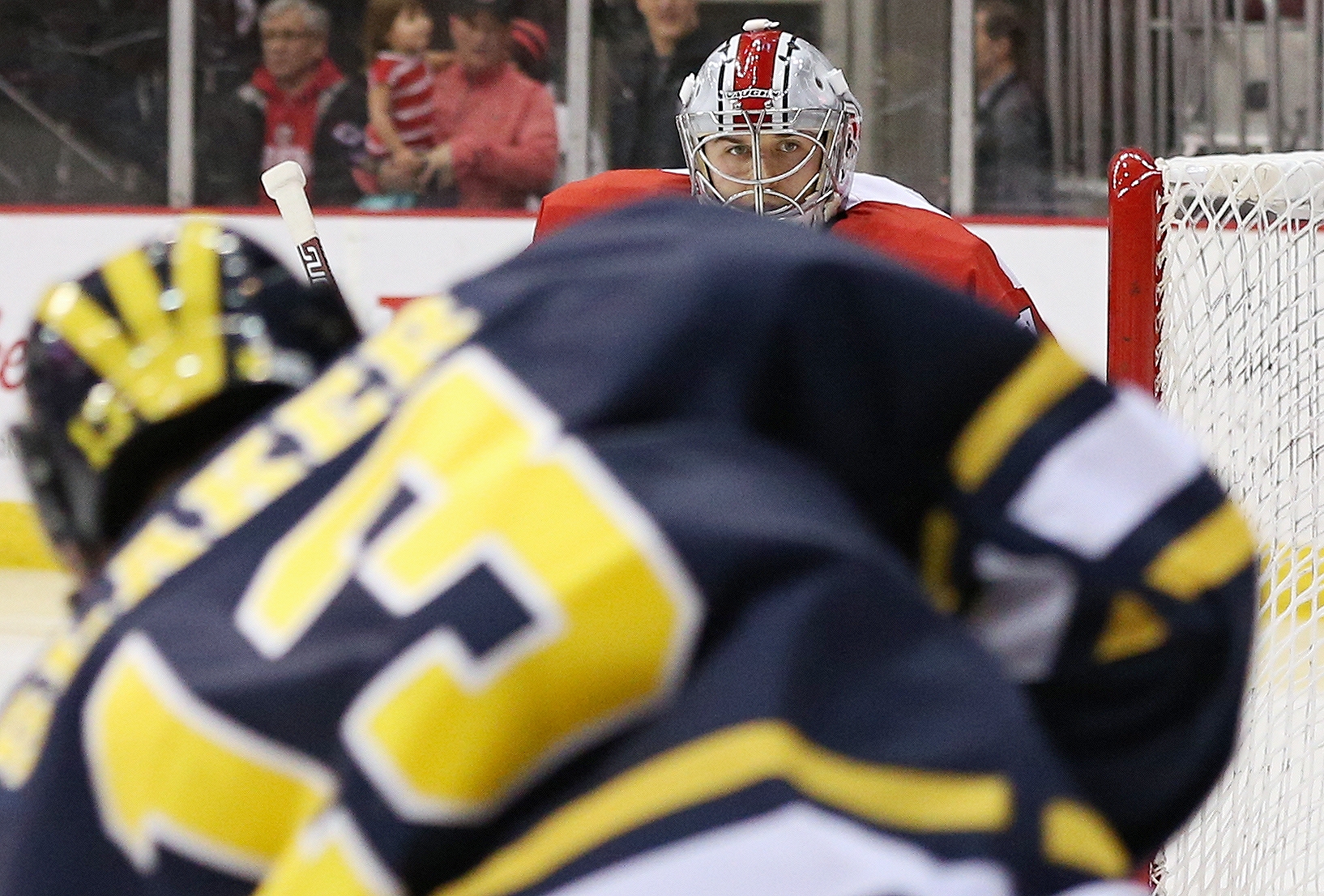 If there is going to be a second straight sweep in the season series between rivals Ohio State and Michigan it won’t be by the Buckeyes.

After OSU won all five meetings last season, including the semifinal of the Big Ten tournament, the Wolverines disappointed a huge crowd at Value City Arena on Friday by upending the No. 4 Buckeyes 2-1 by scoring twice in the second period.

“They were the better team,” OSU coach Steve Rohlik said.

They play again Saturday at Value City Arena at 7 p.m.

Ohio State was expected 8,000 or so for the opener but a season-high 10,084 fans were on hand. Unfortunately, they had little to cheer after the Buckeyes took a 1-0 lead and they were strangely muted for most of the game.

Still, it was an impressive turnout.

“The crowd was incredible,” Rohlik said. “You walk out here and see 10,000 people and close to 3,000 students, that tells you where Ohio State hockey is. It’s disappointing we didn’t get to keep them on their feet enough.”

Carson Meyer, the junior transfer from Miami (Ohio) got his first taste of the OSU-Michigan rivalry and the forward from nearby Powell, helped the Buckeyes to a 1-0 lead, sending a cross-ice pass to Gerard in the left circle for his fourth goal at 5:50.

The Buckeyes had a 5-on-3 for two minutes early in the second period but failed to increase the lead although junior Tanner Laczynski rang the pipe.

“We had a couple of great looks, hit a couple of posts,” Rohlik said. “Sometimes you get those, sometimes you don’t. We go up 2-zip maybe it’s a different game, but it didn’t happen, then you’ve got to respond from there.”

Michigan got the momentum from the double kill and tied it at 1 with Jake Slater scoring form the right circle at 6:40 to finish a 2-on-1.

The silky smooth skills of Wolverines defenseman Quinn Hughes were on display for the go-ahead goal at 17:32 of the second period.

Hughes, a sophomore, was the seventh pick in the 2018 NHL draft by the Vancouver Canucks and should be earning big bucks by this time next season. He showed why with a rush down the right wing.

He held off defenseman Tommy Parran then sent a pass to Nick Pastujov who found Will Lockwood open for the score.

The Wolverines clamped down in the third period and allowed only four shots on goal.

“We played into what they like to do. We would get the puck deep and not really establish the forecheck,” Gerard said. “They had a lot of heat coming up the ice on us. For whatever reason we didn’t have the jump tonight and we really weren’t playing connected.”

OSU pulled senior goalie Sean Romeo with 1:16 left and kept the puck in the offensive zone for nearly the remainder of the game, drawing two icings, but fired just two shots on Hayden Lavigne.

“This is one of the better crowds I’ve seen since I’ve been here,” Gerard said. “It’s unfortunate we weren’t able to get the job done for them. The support was awesome. It was great to see the building packed tonight like it was.”