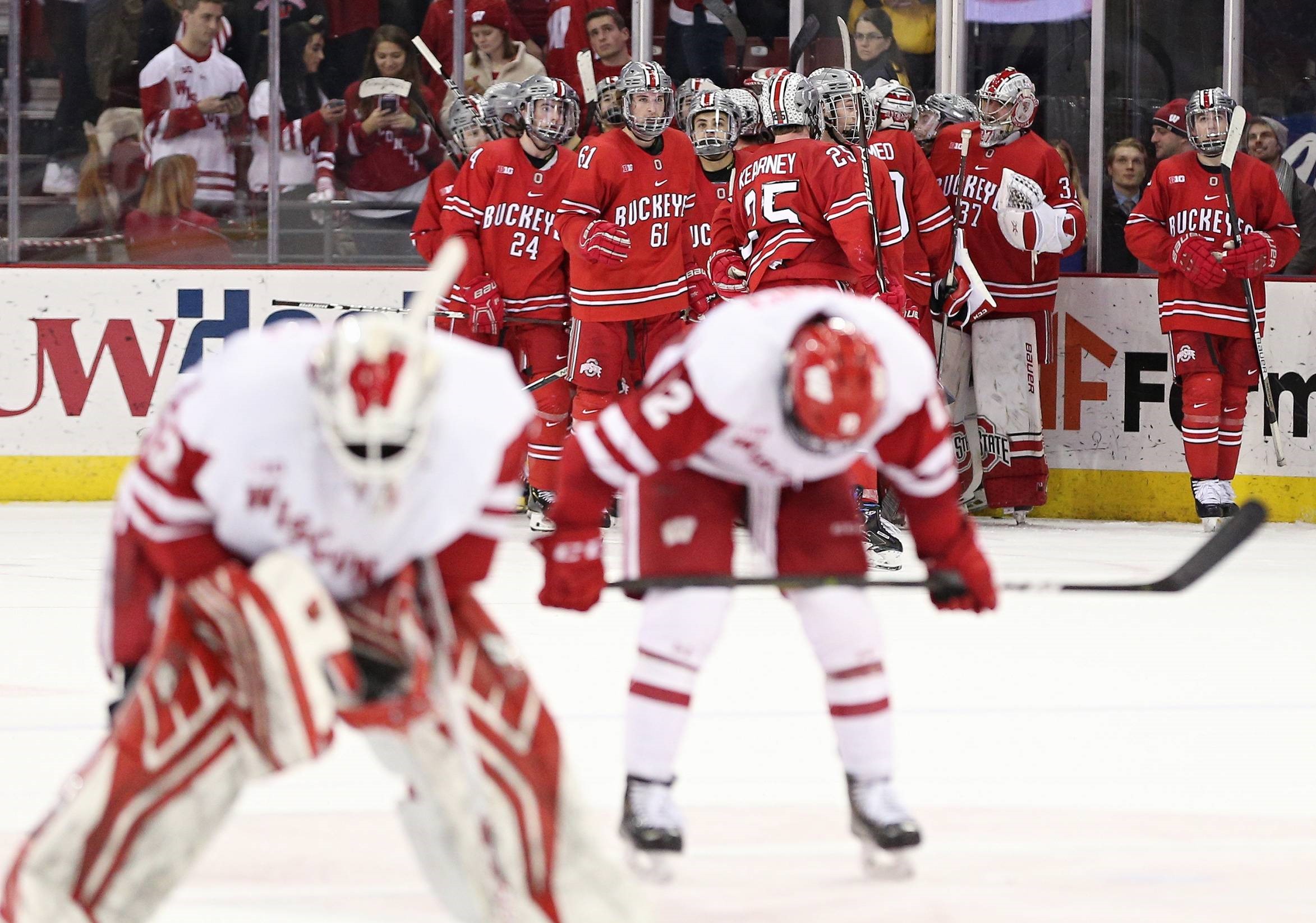 The unstoppable Ohio State Buckeyes found new and interesting ways to take a pair of games at Wisconsin to run their winning streak to seven games and move tantalizingly close to wrapping up the Big Ten regular-season title.

Despite injuries robbing them of the services of junior forward Tanner Laczynski, freshman forward Gustaf Westlund and senior defenseman Sasha Larocque, the No. 3 Buckeyes defeated the Badgers 2-1 in overtime on Friday and 4-1 on Saturday at the Kohl Center in Madison, Wisc.

They won the opener even though senior forward Dakota Joshua was ejected at 15:33 of the first period for a questionable contact-to-the-head call. They won despite getting just seven shots on goal through two periods.

The next night, they beat the Badgers for a sixth straight time in front of a sellout crowd of 15,359 on hand to see the No. 10 jersey of Badger legend Mark Johnson retired despite one shot on goal in the third period.

That happened to be a shorthanded empty-net goal by senior Mason Jobst with one second left in the game. His score came after Joshua got revenge with a first-period goal and second-period tallies senior defenseman Tommy Parran and junior forward Miguel Fidler, each of whom scored for the first time this season.

The constants for the weekend were the goaltenders. Senior Sean Romeo made 20 saves in the first game and sophomore Tommy Nappier came within 1:40 of his second straight shutout in the rematch.

Minnesota is third with 27 points in 20 games; Penn State has 26 points in 18 games and Notre Dame is fifth at 24 points but has a game in hand on the Buckeyes.

The Fighting Irish will make that up Tuesday when they host Michigan.

Regardless of that outcome, the Buckeyes can clinch the regular-season title and first-round bye with a sweep of Minnesota at Value City Arena on Feb. 15 and 16 at 6 p.m.

Winning each in regulation or the first overtime would add six points and move them to 47.

As it stands, Notre Dame can max out at 46 points, Michigan 45 and Penn State 44. That obviously will change after the game in South Bend on Tuesday.

It was the young Badgers vs. the veteran Buckeyes in the opener before 9,555 fans. The more experienced team overcame a sluggish start and a smothering effort by the home team.

Wisconsin was unable to take advantage of Joshua’s major penalty and was 0 for 10 on the power play for the series, including seven tries on Saturday.

Nonetheless, Mick Messner gave the Badgers (9-14-5, 5-8-5-2) a 1-0 lead at 2:28 of the second. The Buckeyes peppered Daniel Lebedeff with 15 shots in the third and got the equalizer from senior John Wiitala on the power play at 8:48. Did we mention that Wiitala’s dad was captained the Badgers as a senior in 1986?

Junior defenseman Matt Miller scored the winner with 9.5 seconds left in the 5-on-5 overtime off a pass from freshman Quinn Preston (his second helper of the game).

The timing was critical. If the game had advanced to the second overtime (3-on-3), the Buckeyes would not have earned the full three points in the standings.

“It wasn’t pretty but taking three points on the road at this point in the season is huge,” Miller said. “The guys stuck together and found a way to come out with the win.”

The second game, as expected, was feisty and OSU was also scoreless in seven power-play chances, but Joshua netted his ninth goal at 10:48 of the first off his own steal and shoot.

“We definitely like being the villain and being the bad guy and going in there and ruining peoples’ days,” Joshua said.