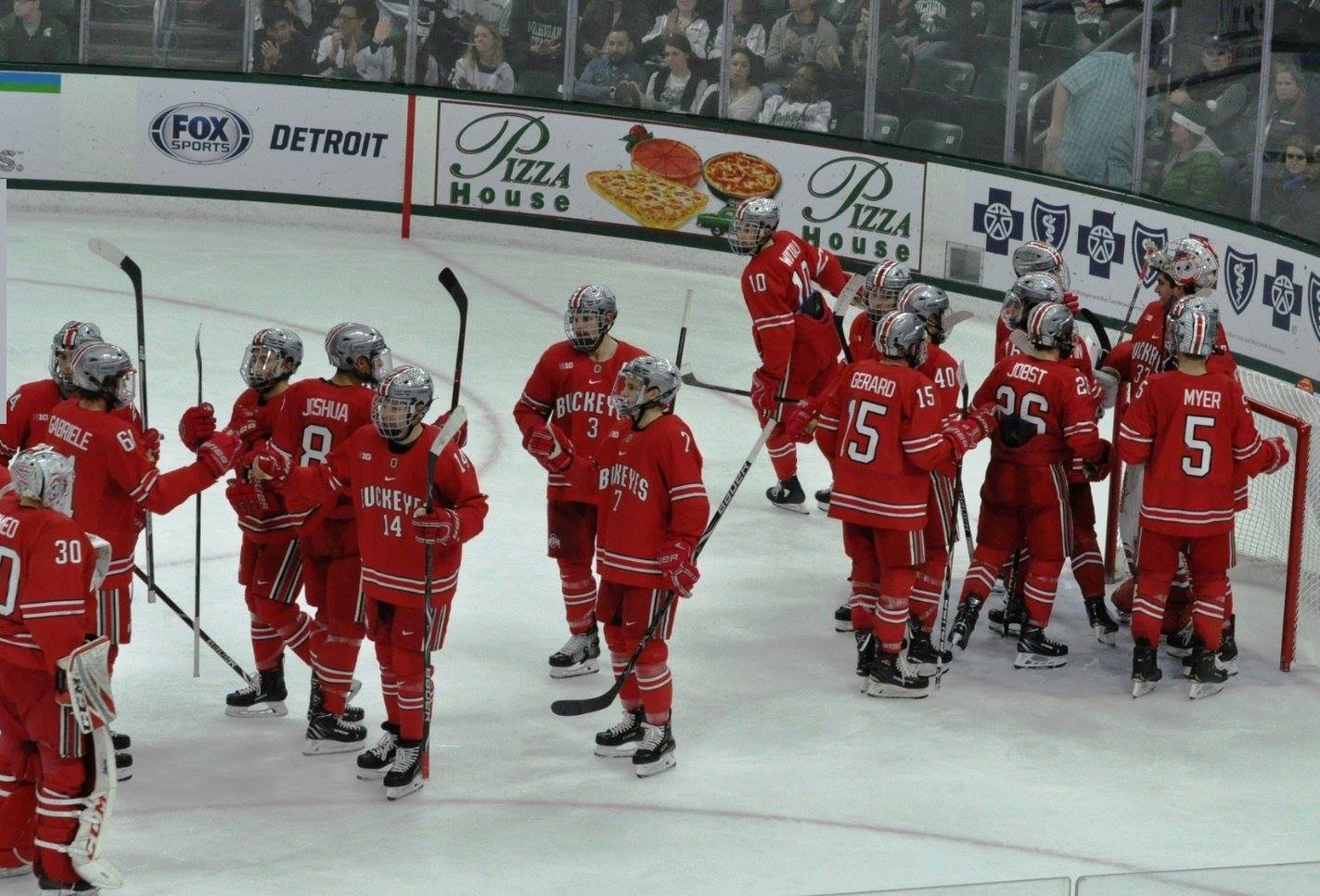 Make no mistake about it: Even though No. 7 Ohio State took four of six points in its series at Michigan State on Friday and Saturday, it was a lost weekend.

OSU, with one of the stingiest defenses in the country, somehow managed to blow a three-goal lead with five minutes left in the third period Friday against the worst team in the conference.

The Spartans tied the score at 7, giving each team a point in the standings, but Michigan State (6-11-3, 2-6-2-2) grabbed the extra conference point by scoring in the 3-on-3 overtime. What should have been a three-point game for the Buckeyes with a regulation victory felt more like a loss.

There is also another truth: The Buckeyes are resilient. They have not gone more than one game without a win or tie this season. When they lose or draw, they always come back strong.

OSU recovered from the humbling game on Friday to soundly defeat the Spartans 6-0 in the rematch behind 29 saves from sophomore Tommy Nappier and a balanced scoring sheet.

“This was a good bounce back after last night’s disappointing tie,” OSU coach Steve Rohlik said. “We had one of our best, most complete games tonight. It was a good team win.”

Senior Mason Jobst had seven points (two goals, five assists) in the series.  A pair of Michiganders also led the way for the Buckeyes. Senior Dakota Joshua had two goals and two assists and freshman Quinn Preston, who entered the weekend with two points (goal, assist) in his career, had two goals and three assists in the two games.

Ohio State through 10 of 24 conference games lead the Big Ten with 20 points, four ahead of Wisconsin.

OSU before the first game vs. the Spartans ranked seventh nationally in defense at 2.06 goals per game and had allowed two or fewer goals in 14 of 18 games.

That all went out the window in a wild affair before 5,585 at Munn Arena. Despite the first two goals of the season for rookie forward Gustaf Westlund (along with an assist) and the first career goal for rookie defenseman Ryan O’Connell, the Buckeyes could not hold on.

Gustaf, junior Tanner Laczynski and Preston scored in the first period, but OSU led only 3-2. Jobst’s goal from Preston was the only goal of the second period and the Buckeyes were looking good considering they were 7-0-1 when ahead after two periods,

The Spartans roared back on a goal by Zach Osburn 55 seconds later and a power-play marker at 16:31 from Taro Hirose. The comeback was completed with 47 seconds left when Dennis Cesana made it 7-7 with the goalie pulled for an extra attacker.

There was no scoring in the 5-on-5 overtime to give each team a point, but Lambdin had the deciding score at 2:20 of the 3-on-3.

The Buckeyes were a different squad in the second game per usual. They are 5-3-2 on Fridays and 7-1-2 on Saturdays.

After a scoreless first period, the Buckeyes scored three times in the middle stanza and added three more in the third to quiet the crowd of 4,923.

“Coming off of a long break and a few off games it was great to see the guys come together and give a complete effort tonight,” senior defenseman Sasha Larocque said. “There are still areas that we need to improve but the effort we played with was a big step in the right direction.

“Our offense was clicking all weekend and defensively we were able to turn it around from Friday night. When we had our breakdowns ‘Napes’ was there to make some big saves.”

Jobst had a goal and two assists. In his career he has 65 goals and 86 assists for 151 points to become the first Buckeye since 1991 with at least 150 points.

Joshua, Preston and another Michigan native, junior Ronnie Hein, each had a goal and an assist as did senior John Wiitala.

Laczynski had two helpers as Nappier got his third shutout of the season and fourth in his career. He is second nationally with a 1.54 goals-against average and a .947 save percentage.

Hein gave OSU a 1-0 lead at 4:40 of the second from the high slot. Preston scored a tumbling goal driving toward the net off a faceoff win by Jobst at 8:14 and the lead was extended to 3-0 at 13:26 on a power-play goal from Jobst.

The Buckeyes took an advantage of a 5-minute power play on a charging call to Lambdin for a 4-0 lead at 5:25 when Wiitala scored.

During the continued man advantage, the Spartans took another penalty and Joshua scored a 5-on-3 goal at 7:31. Continuing the theme, Michigan native Brendon Kearney completed the scoring at 16:31 and Nappier made 12 saves in the final period.

“We’re really proud of how we bounced back as a team tonight after what happened last night,” Nappier said. “I thought we played a real solid team game and the guys did a great job playing in front of me.”

OSU is 4-0-3 in the past seven games. … Joshua has seven points (two goals, five assists) in the past four games. He has 94 points in his career, Laczynski sits at 98. … The Buckeyes have scored 18 goals in the past three games.