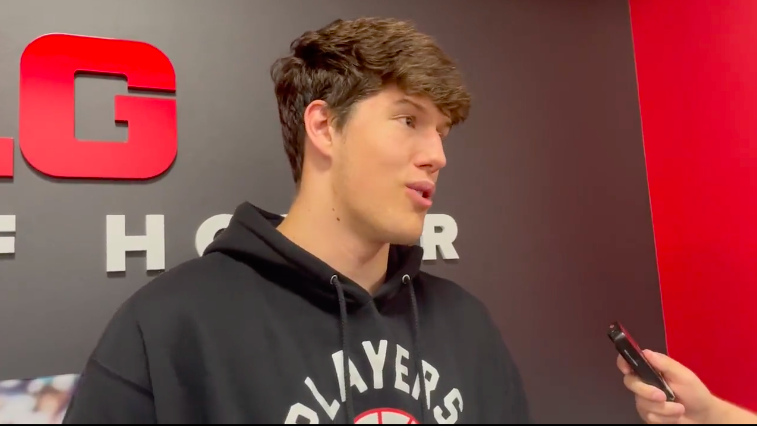 In Chris Holtmann’s five years as the Ohio State men’s basketball head coach, he’s never had a true center. He’s had E.J. Liddell, Kyle Young and Zed Key, but a back-to-the-basket, shoot-over-the-shoulder big man has been an unfillable void for the Buckeyes.

Incoming four-star center Felix Okpara arrived on campus this week, and 2023 center commit Austin Parks of Saint Marys (Ohio) Memorial High School will come to Columbus next summer. Parks attended Ohio State’s high school team camp on Friday but could not compete because of a stress fracture in his right knee.

Still, Parks sat on the bench for his school’s scrimmages, cheering on his teammates and offering them friendly advice when they sat next to him. After Saint Mary’s first game, Parks spoke with gathered reporters and shared his excitement to join Ohio State, where he hopes to become the breakout center the Buckeyes have looked for during Holtmann’s tenure.

Parks is a 6-10, 240-pound recruit ranked as the No. 102 overall prospect and No. 11 center in the 2023 class, according to 247Sports. He also is the fifth-best prospect in Ohio. Before his senior season, Parks said he wanted to develop his three-point shot and work on his mid-range jumper. On defense, he hopes to become quicker laterally and use his height more effectively in the interior while limiting his defensive fouls.

With Okpara set to make his Ohio State debut this fall, Parks hopes the 6-10 center will stick around in Columbus for more than one season. Parks said he and Okpara could develop a lethal frontcourt duo for the Buckeyes that will cause problems for the opposing non-conference and Big Ten opponents.

“I feel like me and Felix would be a good frontcourt and all that, so I’m ready to play with him and (create) a versatility between me and him,” Parks said. “It’s gonna be scary.”

Parks met with assistant coaches Jack Owens and Jake Diebler on Friday. He also was seen speaking with Holtmann on the sideline of Ohio State’s practice courts. Parks said he is thankful the athletic department extended Holtmann’s contract this offseason, recognizing the coach who recruited him will lead him for the foreseeable future.

“I’m excited about (Holtmann’s contract) because I know the guy that put so much faith in me and that really wanted me is going to be here for my whole career, and I won’t have some new coaching coming in,” Parks said. “That’s who I want here.”

Parks will return to action in four weeks after a brief rehabilitation for his right knee. When he is cleared, Parks will participate in AAU basketball with Ohio Buckets before returning to Saint Mary’s in the fall.