Marcus Crowley Will Be Out ‘A Long Time’ Per Day 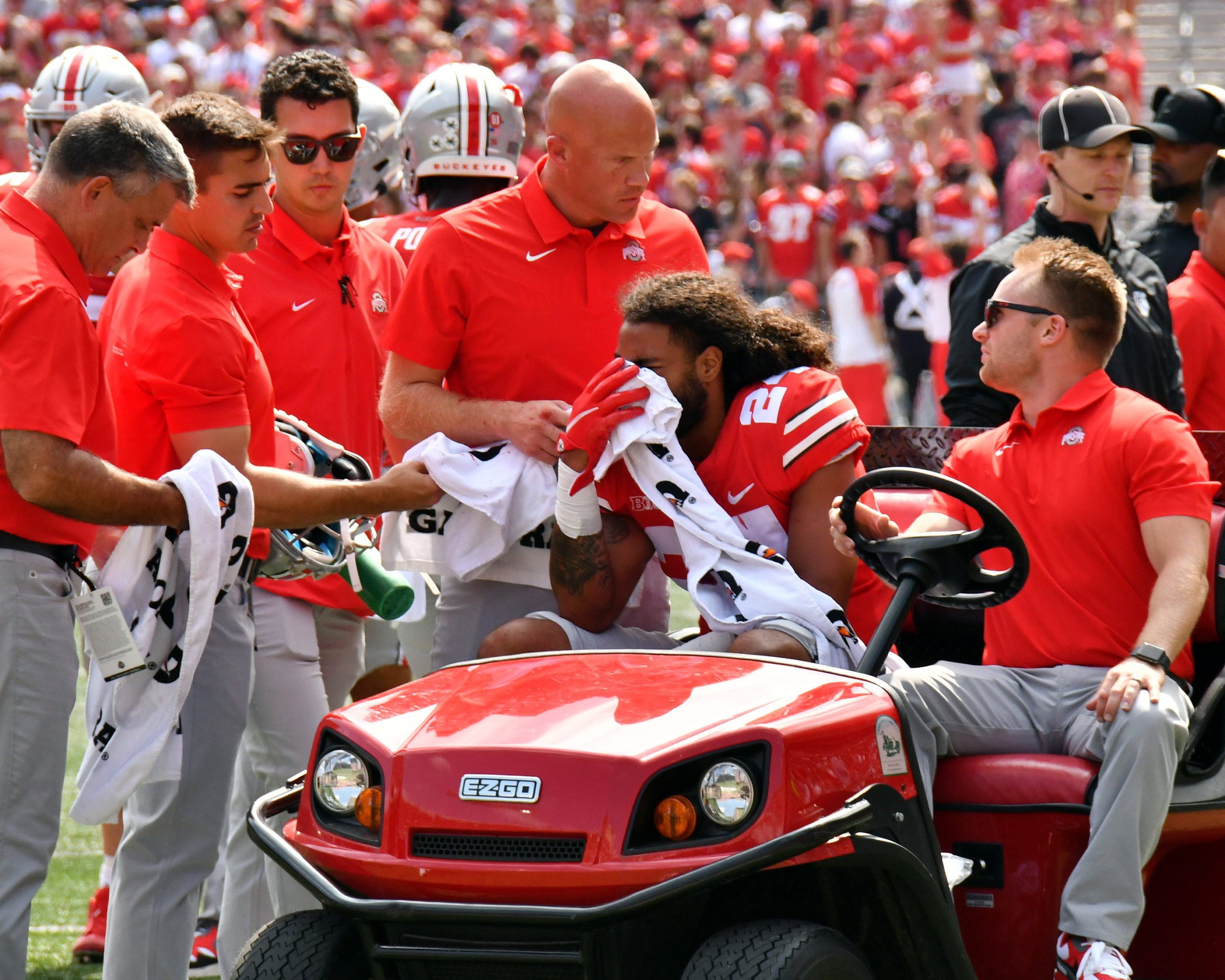 Ohio State will be without a member of its running back room for the remainder of the season and potentially longer, per head coach Ryan Day at his weekly press conference on Oct. 26. Third-year halfback Marcus Crowley will be unavailable for the Buckeyes for “a long time” after suffering an injury during Ohio State’s off week following a blowout victory over Maryland Oct. 9.

“Marcus is going to be out for a long time,” Day said. “It’s a long-term injury and certainly prayers go out to him. Something happened during the off week and he’s working toward recovery but it’s going to be a long road for him.”

The running back room, now down to four scholarship players after Crowley’s injury and classmate Steele Chambers’ move to linebacker in the offseason, should gain a boost this week with the return of junior Master Teague, however, who was also out on Oct. 23 against Indiana.

With Teague back and ready to serve as one of the backups for freshman sensation Treveyon Henderson, alongside another recent returner to the lineup in Miyan Williams, Day said that he’s comfortable with Ohio State’s running back depth, even as it has dwindled in recent weeks.

“Master we hope to get back this week. For this point of the year we’re doing OK (in running back depth),” Day said. “It’s part of the game, you’re going to have some guys who get bumped and bruised along the way, you’re going to lose some guys but I was excited to see Miyan get back out there. It was good to see Evan (Pryor) too, I thought Evan had some good snaps there. We get Master back and then we feel like we have four good for this game.”

Even with the injury, Ohio State will be about as healthy at running back against Penn State on Oct. 30 as it has been all season, assuming that Teague and Williams are healthy enough to play. It’s a room that, even with injuries, Day has been impressed by.

“It’s been a little bit (of a revolving door) but that’s part of college football,” Day said. “Different teams across the country deal with the same thing and we know that it’s going to be unexpected. That’s what we talk to our players about all the time, you just don’t know what’s going to happen and that’s why you have to recruit depth and guys have to understand that their opportunity is going to come if they just continue to work because it’s a rough game. Guys get injured and you have to be able to adapt to that. I think Tony (Alford) has done a really good job with his room.”

For Crowley, this is yet another long-term injury in a career that has been – to this point – defined by absences. He missed two games earlier this season after being carted off of the field against Oregon and was lost for nearly the entirety of both 2019 and 2020 after an ACL tear early in the 2019 season. He had impressed running backs coach Tony Alford during the offseason and shone in the playing time he did see this season, but it seems that another lengthy rehab is on the docket for the Florida native.

“I think he’s getting better. He really has done a good job of committing himself to getting stronger, just more girth and strength, so he doesn’t get knocked off as easily,” Alford said. “Marcus is a competitive kid, and he’s had a really good offseason. So I’m anxious to see where this continues to go.”

With Henderson, Pryor and Williams all surging ahead of the older Crowley in the lineup, significant playing time in Columbus for the former four-star is seemingly less and less likely.