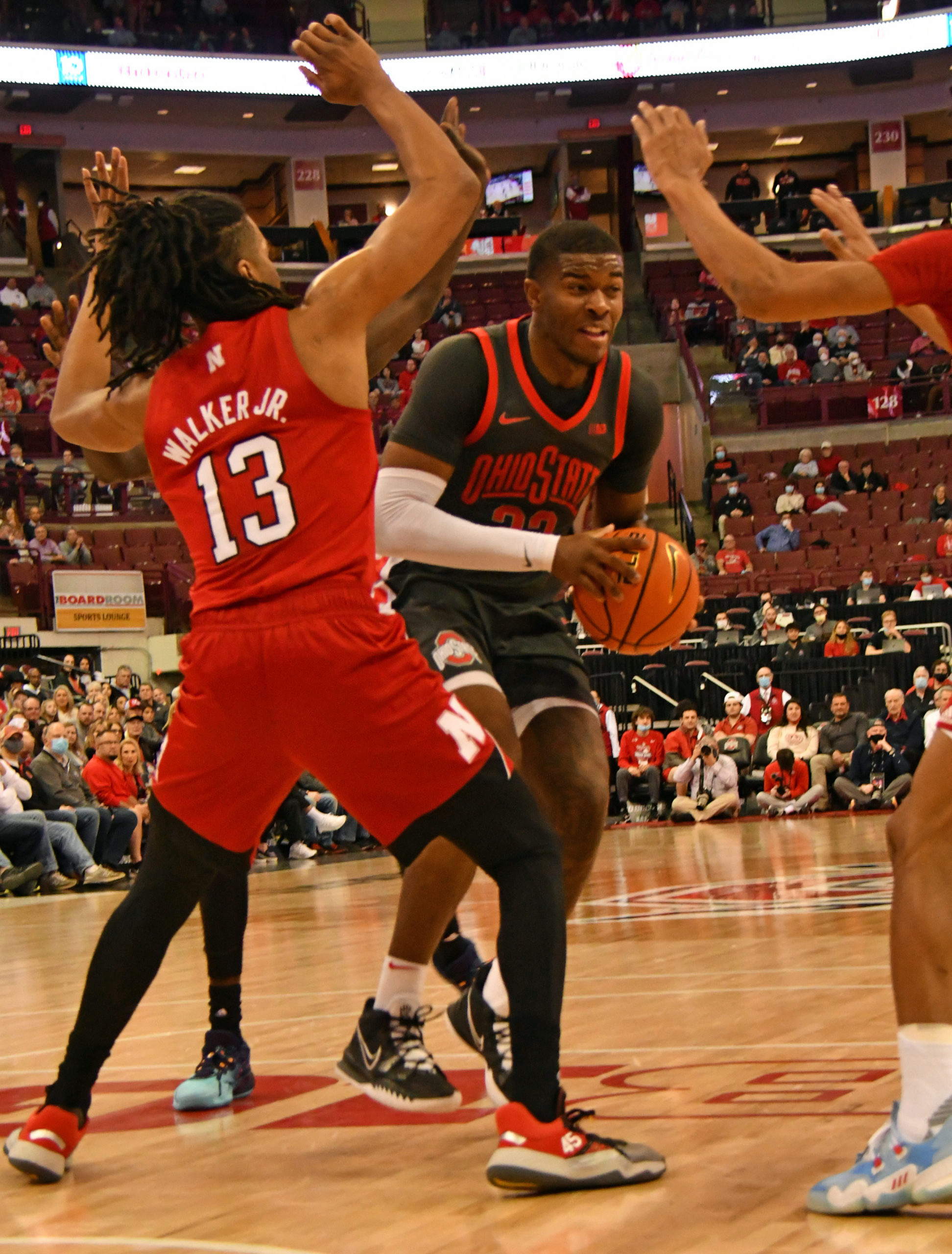 Ohio State guard Malaki Brahnam and forward E.J. Liddell were honored March 8 as the Big Ten released its end-of-season All-League teams and its picks for player, rookie, defender and coach of the year.

Branham was selected to the third-team by both the coaches and media, earned a nod on the All-Freshman team and claimed the honors as the Big Ten’s Freshman of the Year on both batches of ballots, beating out Nebraska’s Bryce McGowens – who was selected to the all-freshman team alongside Branham, with Michigan State’s Max Christie, Michigan’s Moussa Diabate and Wisconsin’s Chucky Hepburn.

The media and coaches agreed on Branham, McGowens, Illinois’ Alfonso Plummer and Purdue’s Trevion Williams as third-team picks, with Brad Davison of Wisconsin on the media ballot and Geo Baker of Rutgers and Gabe Brown of Michigan State rounding out the coaches group (the sixth player was due to a tie).

The freshman out of Akron finished the season with 13.2 points, 3.6 rebounds and 1.9 assists per game, breaking through into a starring role in the back half of the season. In 19 games since the turn of the calendar, Branham has averaged 16.9 points, shooting 52.3 percent from the field and 46 percent from 3-point range, playing himself into NBA Draft talk – though he’s yet to make any decisions on that front.

“He’s really worked, he’s grown in confidence and the game has slowed down for him,” head coach Chris Holtmann said of his first-year guard. “When a game slows down for an athlete, they think less and play more on reaction. That’s been the case for Malaki and it’s been fun for all of us to see his development and growth in a short amount of time. It’s been really exciting for Buckeye Nation too to see someone grow like that in front of their eyes.”

As for Liddell, the junior forward wasn’t able to claim Player of the Year honors – those instead went to Wisconsin’s Johnny Davis – but he did earn a nod on both first-team ballots, and was picked by the coaches to the All-Defensive team. He was joined on the coaches and media first-team picks by Illinois big man Kofi Cockburn, Davis, Purdue guard Jaden Ivey and Iowa forward Keegan Murray. Cockburn and Murray were unanimous picks among both groups, Davis was a unanimous pick among the coaches but not the media.

The defensive team features Illinois guard Trent Frazier, Purdue’s Eric Hunter Jr., Indiana’s Trayce Jackson-Davis and Caleb McConnell of Rutgers. Liddell finished the regular season averaging 19.4 points, 7.9 rebounds, 2.6 assists and 2.6 blocks per contest, and fulfilled all of the internal expectations for what will be his final season in Columbus.

“It’s been the kind of season you would hope someone would have when they decide to return to school,” Holtmann said. “It doesn’t always work out like that, you don’t always improve your stock by coming back – I could rattle off 20 cases like that. It’s happened with him and it’s a credit to his work and his buy-in to what we’ve been challenging him with.

“We made a commitment to E.J. and his family that he would play and defend on the perimeter and there have been times where that’s been an adjustment for all of us but it’s something we’ve committed to and it’s really been good for him and his growth and it’s also helped people see him in a good way. But almost every aspect of his game has improved and that’s what you want from a guy coming back. That’s a byproduct of E.J. being E.J. and I’m really happy for him.”

No other Buckeyes were included on any All-Big Ten teams, but guard Justin Ahrens was picked as Ohio State’s Sportsmanship Award Honoree.