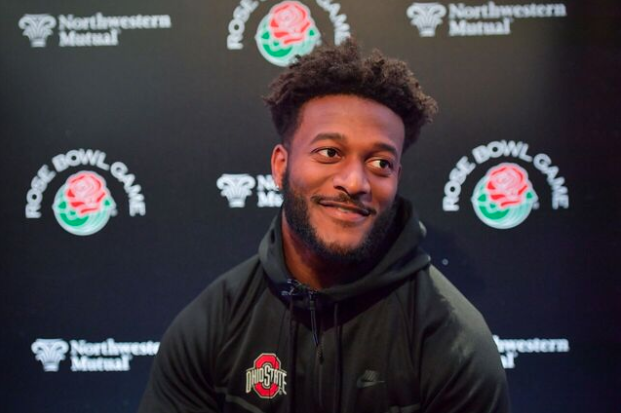 K.J. Hill is coming back to Ohio State for one more year. The junior H-back announced Tuesday on Twitter that he would bypass the NFL draft and return to the Buckeyes for the 2019 season. Giving thanks to former head football coach and current assistant athletics director Urban Meyer, and citing advice from former OSU wide receiver Cris Carter (1984-86), Hill looked forward to “one last ride” in Columbus under head coach Ryan Day and wide receivers coach Brian Hartline.

“First I would like to thank Coach Urban Meyer for giving me a chance to be a Buckeye,” Hill’s tweet read. “It was by far some of the best moments of my life. With that being said, and with the guidance and mentorship of Cris Carter, and my family, I have decided to take one last ride with my brothers, my coaches, and you, Buckeye Nation!

“I’m ready to help lead us to another National Championship.

“I will be returning for my senior year.”

The Buckeyes lose fifth-year seniors Parris Campbell, Johnnie Dixon and Terry McLaurin to graduation. To keep Hill, however, OSU maintains its top H-back and returns its second-leading receiver. Ohio State has Austin Mack, Binjimen Victor, Chris Olave, C.J. Saunders, Demario McCall, Jaylen Harris, Garyn Prater and Jaelen Gill among its receivers to have recorded more than one catch over the past season.

As for returners, Hill follows linebacker Malik Harrison and safety Jordan Fuller among the three juniors set for one more year. Ahead of the Jan. 14 deadline for underclassmen to make an NFL decision, junior cornerbacks Kendall Sheffield and Damon Arnette have yet to announce either way.