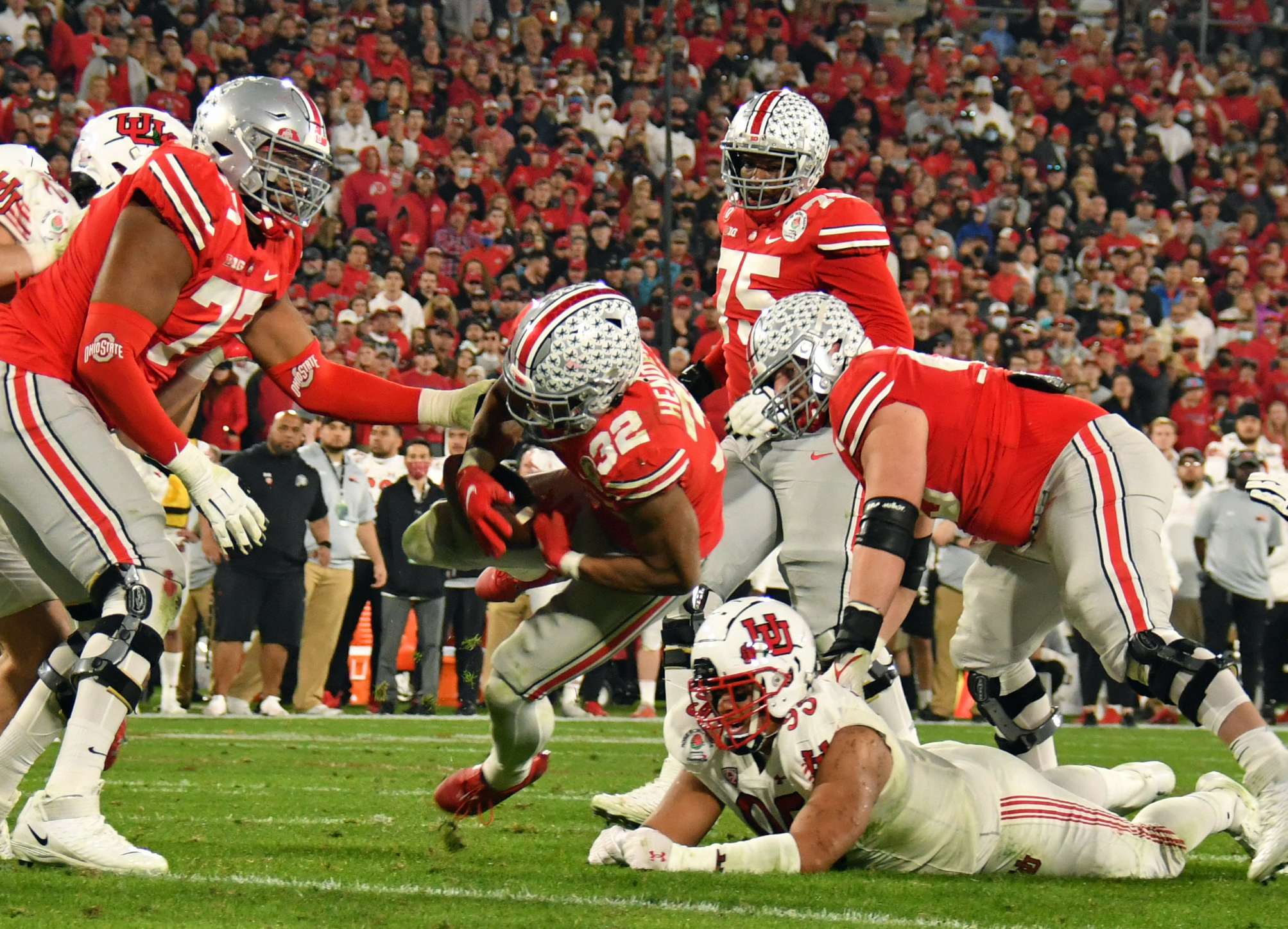 Ohio State is looking to expand its rushing attack. The Buckeyes haven’t quite come out and said it – in fact, offensive coordinator and tight end coach Kevin Wilson all but said the opposite after the Rose Bowl when he spoke glowingly about Ohio State’s standing statistically on the ground – but Ryan Day’s hire of Justin Frye certainly implies it.

An assistant under Chip Kelly at UCLA since 2018 and one of the nation’s most creative running game designers, Frye’s hiring marks the first real shift in Day’s running game ideology since his arrival in Columbus. The Buckeye head coach, who also calls the offensive plays for OSU, is ready to move away from the simplicity that he rode on the ground in his first three seasons running the show.

And in Frye, who touts a nearly even mixture of gap and zone blocking and preaches the importance of establishing dominance up front for a strong rushing attack, Day feels he has the man to do it.

“If you really have presence, then Zoe Rose Frye, my 9-year-old daughter, needs to be sitting up in her seat saying, ‘They’re gonna run the ball right there,’ ” Frye said. “And we don’t care, we just do it. We get the job done.”

In 2021, the Bruins did get the job done on the ground. Frye and Kelly built out a top 20 rushing attack around tailbacks Zach Charbonnet and Britain Brown, as well as quarterback Dorian Thompson-Robinson, and they did so with dozens of unique concepts on the ground to confound defenders and creative numbers advantages for a veteran offensive line.

For the Buckeyes – who often seemed wedded almost entirely to inside zone and stretch plays, with the occasional counter sprinkled in for a four-tackle line group that really couldn’t execute counter – new and unique concepts could be just what the doctor ordered to revamp a rushing attack that, despite what the stats may say, went stale in 2021.

Granted, bringing new ideas into the program and actually utilizing them are very different, but if Frye is free to operate in the world he’s most comfortable in, Ohio State could be in for a wildly different looking rushing attack in 2022.

That starts in blocking scheme. Ohio State showed almost zero gap blocking in 2021 because of a lack of confidence in the offensive line’s mobility, relying heavily on zone and hoping to create room at the line of scrimmage, rather than out in space. Against overpowered opponents, it worked brilliantly. But against foes that could keep up, the Buckeyes struggled to find a push in the trenches and were often without a counter for overly aggressive defenses. Frye met a similar issue early in 2021 as UCLA hosted LSU, and found an answer in isolating and reading backside defenders on pin-and-pull (gap) concepts.

Take this midline read with a frontside tackle-center pull combo in the redzone as example No. 1. UCLA leaves the backside defensive tackle unblocked for Thompson-Robinson to read, while the center and frontside tackle pull into open space, with the right guard and a tight end blocking down to spring their teammates free of the defensive line. Because LSU had only four box players to cover the field and those pins knocked out both defensive linemen, a pair of linebackers are left to deal with those pulling offensive linemen – not what LSU was looking for.

Meanwhile, by reading that defensive tackle, UCLA has taken a box defender out of the blocking equation entirely. If he goes after the halfback, Thompson-Robinson can pull the ball and follow behind two blockers, the backside guard and tackle, who are both there to lead the way. That option threat turns a seven-man box into a six-man box, and gives UCLA a free runner regardless of what the defensive tackle decides in the backfield. The quarterback just has to make his read.

Later in the same game, UCLA uses a similar concept to create an easy goalline touchdown into the boundary – and for a Buckeye team that often struggled to run the ball in short-yardage spots, this might be as critical as anything else Frye brings to the table. It’s another sweep look with a midline read, but to counter LSU’s packed front, UCLA adds a third puller into the fold, working a wingback in on the sweep along with the backside guard and center.

Everyone else, including a tight playside wideout, pins down and Thompson-Robinson reads the backside end and tackle (and they make his decision very easy for him), leaving LSU with only one loose boundary defender to deal with the trio of blockers running to his face.

Frye’s option bonafides don’t go significantly deeper – he’s not quite Kelly at Oregon – but he did find another trick up his sleeve this season, nabbing a really neat look from Coastal Carolina to add into the arsenal. It’s a belly triple option with a pair of pulling guards from the offset pistol that the Chanticleers made so much hay with in 2020 and 2021. It will be a modern miracle if Ohio State ever runs something this cool.

The more standard stuff, which you’re likely to see a lot more of, is plenty cool too, though. Frye liked to spice up the zone runs that he did use with pre-snap motion and slice blocks from unique spots, like this from what is essentially a wingback, opposite the tight ends who would usually be tasked with this sort of assignment. There’s no end to leave unblocked so he’s without responsibility, but his action still forces the secondary to respect the potential of play action with the wingback as the target into the flats, which holds a safety in place and drags a second out of the play, giving UCLA another numbers advantage, even for its heavy front.

This is how Frye manipulates boxes to create advantages. As he says, it isn’t magic.

“It’s not magical, it’s not cosmic,” Frye said, “it’s just that’s what happens when you do your job and you do it at a high level.”

And when the defense doesn’t match those slice blockers, UCLA takes advantage, allowing for the tailback to bounce his runs and follow those lead blockers to the perimeter, again taking advantage of the numbers by avoiding a box that didn’t respect the action from the blockers.

That’s the trick with Frye’s zone runs in general, and seems to be something that both he and Kelly picked up in recent seasons. There are a lot of same-side inside zone runs, which basically means that when it’s there, the halfback will tuck entirely inside of his blocks, almost like a counter play, rather than attempting to brave the muck in the middle. When the wash across the line is solid but the defense fills its gaps, a bounce inside of that wash can be absolutely lethal with good seal blocks, which UCLA had consistently throughout the season.

And of course, Frye does have something a little special that might fit very nicely for someone like Jaxon Smith-Njigba. UCLA dials up down blocks across the board to the boundary to sell that as the run direction, drawing nearly all of USC’s defense in and then pops a pass out to the jet motion wideout, who has a pair of tight ends, his halfback and a wide receiver to count on for blocking. The halfback kicks the edge rusher in, and with the convoy in front, that’s pretty much all UCLA needs for an easy first down.

This version of Frye, with Ohio State’s talent, could be exactly what the Buckeyes need to get rolling again on the ground. He certainly has the creativity for it. The bigger question? His freedom to install these new looks into an offense that has been… resistant to new ideas, at times, under Day’s guidance. And that’s a question that can’t be answered until September.