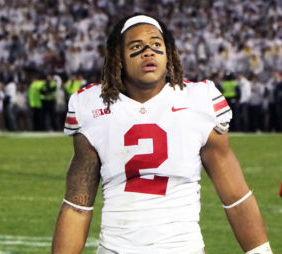 Dominant @OhioStateFB defender @youngchase907 has been named to the Bednarik Award (defensive player of the year) watch list. Young is seeking to become only the 2nd Buckeye with multiple 10-plus sack seasons. Read more on Chase here: https://t.co/tczPLdlzOi pic.twitter.com/n8cMIfSJZ0

The Chuck Bednarik Award is presented annually to the best defensive player in college football as judged by the Maxwell Football Club. No Buckeye has ever won the award, which debuted in 1995.

After being buried behind NFL defensive ends Nick Bosa, Sam Hubbard, Tyquan Lewis and Jalyn Holmes on the Ohio State depth chart as a true freshman, Chase Young emerged as a force during his sophomore season.

Young recorded 34 tackles, including 15.5 tackles for loss and 10.5 sacks with two forced fumbles, nine quarterback hurries and five pass breakups in 2018, after posting 19 tackles, six TFL, 3.5 sacks and one forced fumble as a freshman.

The former five-star recruit from Dematha Catholic in Maryland likely only has one year left in Columbus as he is projected to be one of the first players selected in the 2020 NFL Draft.

In what may be his final season for the Scarlet and Gray, Young aspires to become just the second Buckeye in program history to record at least 10 sacks in multiple seasons, joining Mike Vrabel.