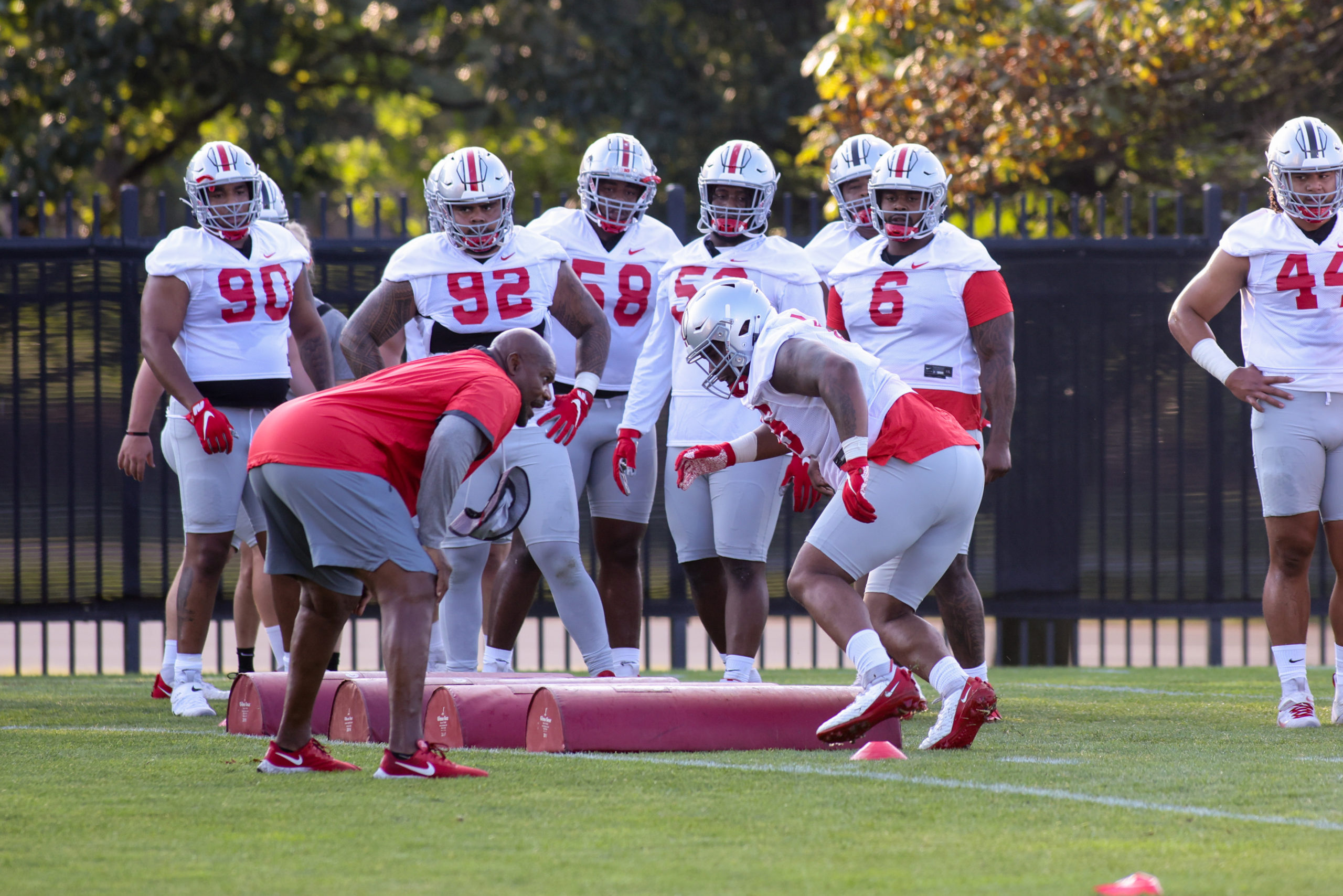 Depth has rarely been a problem for Larry Johnson’s defensive line at Ohio State, but even with a couple starters returning and an influx of highly-touted new talent, Johnson will have to tinker with the lineup just a bit in 2021.

As Ohio State’s third week of fall camp continued Tuesday, Johnson broke down what he’s seen from the defensive end and defensive tackle positions thus far, including which Buckeyes are closest to the top of the depth chart at both spots.

On the edge, Johnson hoped to have four experienced returning players back in 2021 with seniors Tyler Friday and Tyreke Smith, redshirt junior Javontae Jean-Baptiste and junior Zach Harrison. However, an undisclosed injury to Friday that head coach Ryan Day said could cost him most of the season means that another young Buckeye will have to step up in his place.

“We lost Tyler Friday right now, and that makes it tough,” Johnson said after Tuesday’s practice. “So I thought we had four ends returning; Tyreke and then Zach and then Javontae Jean-Baptiste. Those are the [three] guys we’re really counting on to be the guys to lead. Then you got to grab a couple young guys to develop to be a part of that [fourth] unit.”

Smith was a regular starter last season opposite Jonathon Cooper, and Harrison has been tapped to have a breakout third year in the program as Day, Johnson and defensive coordinator Kerry Coombs have raved about his increased capacity to lead this offseason.

Johnson said Harrison has put on an extra 15 pounds of muscle ahead of the year, which puts the former five-star recruit’s frame at a whopping 270 pounds at 6-foot-6.

“He’s more confident right now, he’s playing much faster of a pace that we like him to play at,” Johnson said. “His leadership is off the charts right now, but he put the work in. He’s 270. He probably played last year around 255. So he’s a bigger, stronger guy going into his junior year, so we like where he’s at right now.”

Jean-Baptiste will likely be the third defensive end in the Buckeyes’ rotation, but Harrison said Tuesday that the New Jersey native has turned heads in practice with multiple sacks to his credit.

As for the next man up in the absence of Friday, a pair of five-star true freshmen in J.T. Tuimoloau and Jack Sawyer might just be duking it out to win the extra reps, although Johnson said both players have a long way to go in their development.

“It’s still a learning process, it really is,” Johnson said. “You get to go play college football and be ready to play in a first game –– big-time game. There’s some growing pains they have to go through. They’re working at it, I’m really happy with where they are right now in terms of where their work is. Great work habits, they’re great students of the game. It’s gonna take time.”

However, Johnson said he’s impressed with the early work exhibited by both players, noting that Sawyer is more of a finesse rusher off the edge at present, with Tuimoloau possessing more raw power at the position.

Johnson returns an All-American at the three-technique tackle position inside in super-senior Haskell Garrett, but must replace 2020 starting nose tackle Tommy Togiai.

The Buckeyes have a number of veterans contending for the spot that Togiai vacated, although it appears most likely that sixth-year tackle Antwuan Jackson and fifth-year Buckeye Jerron Cage will rotate in to fill the void at the top of the depth chart early on.

“We’re not quite there yet,” Johnson said about determining a final starting lineup. “We got some guys inside, Antwuan Jackson, Haskell Garrett, Taron Vincent’s really had a great camp, and then Jerron Cage is there. So you got four solid guys there.”

Vincent, a five-star recruit in the class of 2018 that has dealt with numerous injury setbacks, figures to have his best season yet in 2021. However, his natural position is the same as Garrett’s at three-tech.

Johnson said Vincent has learned both tackle positions over the offseason, but there’s no doubt that he will see the field no matter which spot he reps at moving forward.

The new starters won’t exactly be fresh faces for Johnson’s defensive line, but the group will get a trial by fire of sorts in Sept. 2’s season opener against a formidable conference foe in Minnesota on the road.