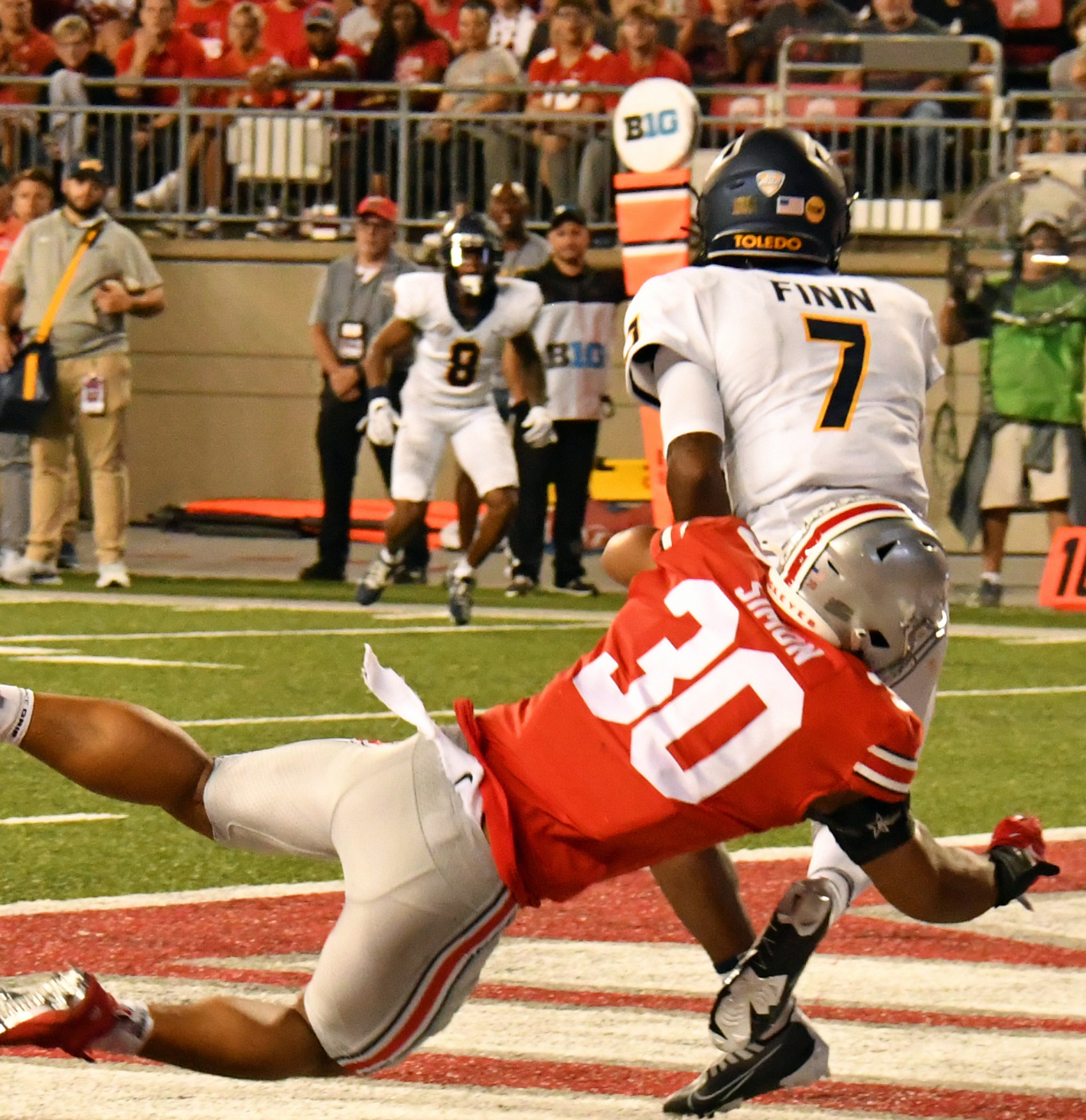 Toledo quarterback Dequan Finn introduced himself to a national audience on Saturday evening, showcasing his dual-threat ability against an emerging Ohio State defense.

While the Buckeyes struggled to contain Finn for much of the evening, Ohio State defensive coordinator Jim Knowles said his unit did not live up to the standard that they’ve set during the season’s first two weeks.

“I don’t think we did a great job (against him). That starts with me,” Knowles said on Tuesday. “I think it was not at the level that we want our defense to be — silver-bullet caliber, it wasn’t there.”

Finn finished Saturday evening completing 10 of 19 attempts for 153 yards, two touchdowns and an interception while adding 70 yards and a score with his legs during Ohio State’s 77-21 win over Toledo. His 223 all-purpose yards nearly surpassed the total yardage outputs by Notre Dame and Arkansas State, as the Irish produced 253 yards while the Red Wolves churned out 276 yards.

While Finn’s statistics popped off of the page, it was what he showed on the field that was most notable. On numerous occasions against the Buckeyes, Finn was able to escape from what appeared to be sure-fire sacks and extend plays to his liking. With attention to Finn’s playmaking ability, Knowles said it was nearly impossible to simulate Finn in practice.

“It’s always great when you win that can learn from that. I think that starts with me, I feel like I didn’t do a good enough job preparing them,” Knowles said. “He was really talented. I learned a lot personally, too. It’s like when you go against an option team, how do you simulate that in practice? It’s difficult. How do you simulate a scrambling quarterback? It’s near-impossible, it really is. You’re not tackling in practice and able to get that sense of speed.

“I thought we had some schemes and some ideas but we didn’t execute them very well,” Knowles added. “When you don’t execute, that’s not the players’ fault. That’s my fault because you have to continue to be creative to find ways to do it. We learned a lot from the experience and get better.”

As the Buckeyes have allowed at least one passing play of more than 50 yards in each of their first three games, Knowles noted that he’s still not overly worried about those explosive plays because of how his defense has responded to them.

“I’ve talked before about how I built those into the system because they do happen. Now, you don’t want to give up any of them, so you never condone that, and it’s always a concern. You have to look at it and say, ‘Why did it happen?'” Knowles said. “Every single explosive play is concerning. It’s not the end of the world because we’ve shown that we can recover from them. That’s important, that your guys know they can recover.”