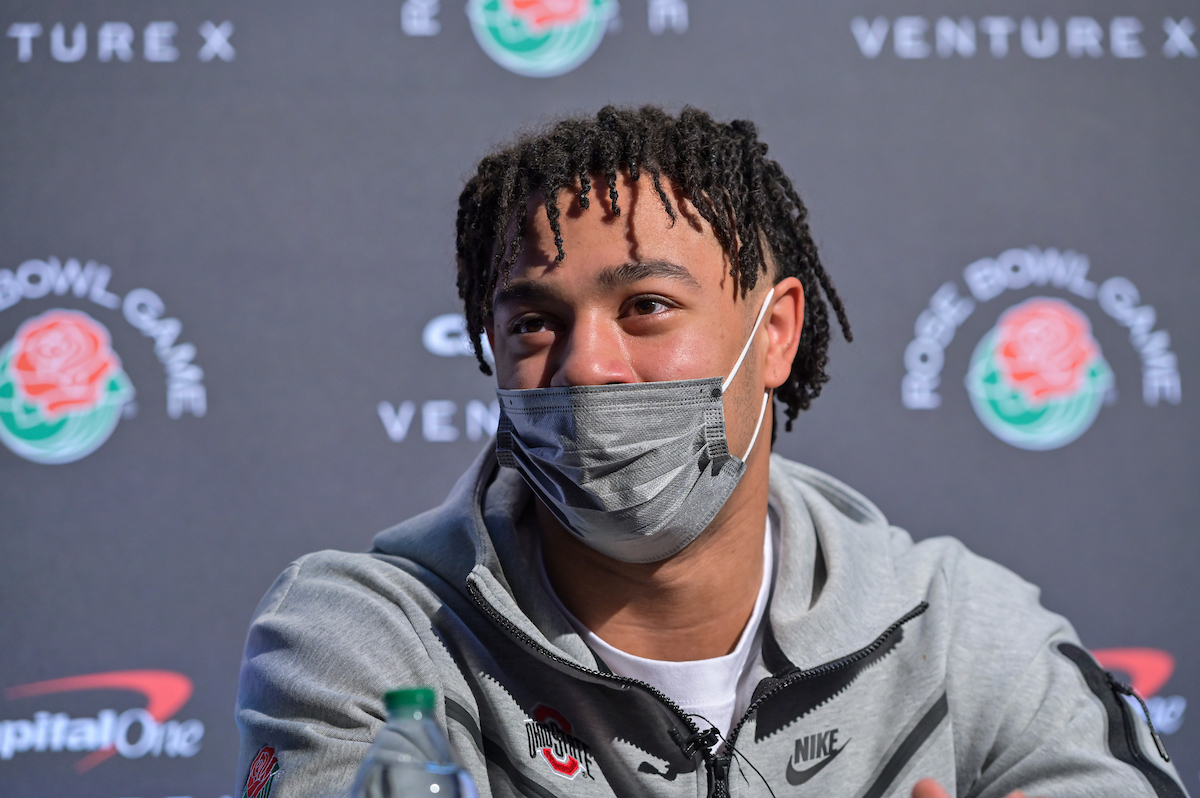 On Oct. 24, 2020, Ohio State quarterback Justin Fields took a snap from center Josh Myers, his Buckeyes facing first-and-goal from the Nebraska 5-yard line. The offensive line shifted right, creating a moving pocket for Fields to make a throw on the run.

Fields worked through his progressions, with Jameson Williams as his first read. The wide receiver ran a 5-yard out to the right pylon while Julian Fleming and Jaxon Smith-Njigba ran slants toward the goal post. As Fields crossed the right-hash mark, he decided Williams hadn’t created enough separation to risk a tight-window throw and moved on to Smith-Njigba, who slipped behind the Nebraska defense to the back of the end zone.

Nebraska linebacker Will Honas created pressure, causing Fields to throw a high-heater to Smith-Njigba, who elevated to receive the pass. Smith-Njigba’s momentum carried him out of bounds, but he balanced himself enough to stretch and plant his right toe in the red paint for a touchdown.

Officials initially ruled the play an incomplete pass, but after further review, the officiating crew reversed their call and awarded Smith-Njigba his first career touchdown.

“It’s not really surprising to see that catch he made. He does it all the time in practice,” Fields said after the game.

The reception put the 2020 Rockwall (Texas) five-star wideout on the map. Over a year later, Ohio State coaches and fans have learned that Smith-Njigba was more be a one-catch wonder.

In August 2021, Chris Olave and Garrett Wilson were regarded as the best wide receiver duo in the county. The future first-round picks were expected to be security blankets for whomever head coach Ryan Day decided to be Ohio State’s starting quarterback – ultimately choosing redshirt freshman C.J. Stroud. With two talented pass-catchers at the “X” and “Y,” Smith-Nijgba would serve as Stroud’s third option out of the slot.

When Ohio State faced Minnesota in its first game, that much was true. Olave had four receptions for 117 yards and two touchdowns while Wilson hauled in five passes for 80 yards and a score. Stroud connected with Smith-Njigba only twice for 12 yards, giving the impression that the rising sophomore might be an afterthought in the Buckeye passing game.

After 12 games, Smith-Njigba changed that narrative entirely. Ohio State’s receiving hierarchy changed substantially after the Buckeyes defeated the Gophers in Minneapolis. On Jan. 1, 2022, Smith-Njigba will be WR1 after Olave and Wilson opted out of the bowl game, leaving the Buckeyes’ slot receiver as the No. 1 pass-catching threat on the roster.

“I always wanted to be in this position,” Smith-Njigba said Wednesday. “So it’s just great that it’s happening. I appreciate Chris and Garrett for allowing me to follow them and them taking me in the right direction, so I appreciate that.”

While Olave (13) and Wilson (12) both doubled Smith-Njigba’s total of six touchdowns in the regular season, he outperformed the Buckeyes’ outside receivers by several measures in 2021. Smith-Njigba recorded 80 receptions in Ohio State’s first 12 games – 10 more than Wilson and 15 more than Olave – and he led the team with 1,259 receiving yards.

On Nov. 6, Smith-Njigba set Ohio State’s single-game receptions record with 15 catches for 240 yards against Nebraska. In addition, his catch and yardage totals are both third-best in Ohio State history for a single season. If he has more than 10 catches and 176 yards in the Rose Bowl, Smith-Njigba will become the Buckeyes’ single-season record-holder in both categories.

Smith-Njigba averaged 11.3 receptions and 152.8 yards per game in Ohio State’s last four contests and had at least nine catches and 105 yards in each of those games. Without Olave and Wilson available to compete for touches, he could reach those records. However, their absence means more attention from the Utah defense and increased responsibility for the sophomore receiver.

“Just being there, like everybody got their eyes on you,” Smith-Njigba said. “So you’ve got to show up every day, and you’ve got to be a leader. Chris was more of an ‘I’m going to show you how to do it,’ so I appreciate that from him for sure.”

Smith-Njigba said he’s a natural leader and understands what kind of leadership his teammates require. He thanks Olave and Wilson for helping him learn the nuances of college football and hopes to offer current and future Ohio State receivers the same knowledge.

“I just felt like I knew Chris and Garrett were leaving, and I feel like we needed someone to step up and be more of a vocal person,” Smith-Njigba said. “I’ve been here for a few years. I played all last season, so I got the most experience. I can talk to those guys, but they’re great. They know what to do. I just helped build them up.”

Smith-Njigba will lead Fleming and true freshmen Marvin Harrison Jr. and Emeka Egbuka on Saturday against the Utes. All three wide receivers were top 100 recruits, with Fleming (2020) and Egbuka (2021) coming to Columbus as the top-ranked wideouts in their graduating classes.

“I know they’re very excited to get this opportunity. I know, when I got my first start, how I felt,” Smith-Njigba said. “You’ve just got something to prove, ready to prove it. I can see it in those guys’ faces. I know they’re excited. I’m excited for them. It’s going to be a good one.”

Smith-Njigba said he understands the Ohio State coaches and fans will have high expectations for him in the Rose Bowl – expectations that will likely stay with him into 2022.

“I’m just seizing every opportunity that comes my way,” Smith-Njigba said. “Just staying locked in and focused. Because I know I’ll get more opportunities. But you know, it’s just all about staying in the moment and seizing those opportunities, for sure.”

Ohio State will not compete for a championship in “The Granddaddy of Them All,” but a win over a talented Utah team in the Rose Bowl could create much-needed momentum for the 2022 season. An impressive performance from the new-look receiving corps might also help establish a legitimate title threat next season.

“Everybody’s happy to be here. Everybody wants to win,” Smith-Njigba said. “It’s a must-win for us. That’s what’s in our head. We’ve got to win this game, especially rolling into next year with Notre Dame game one. So it’s a big game for us. It’s a must-win for sure.”