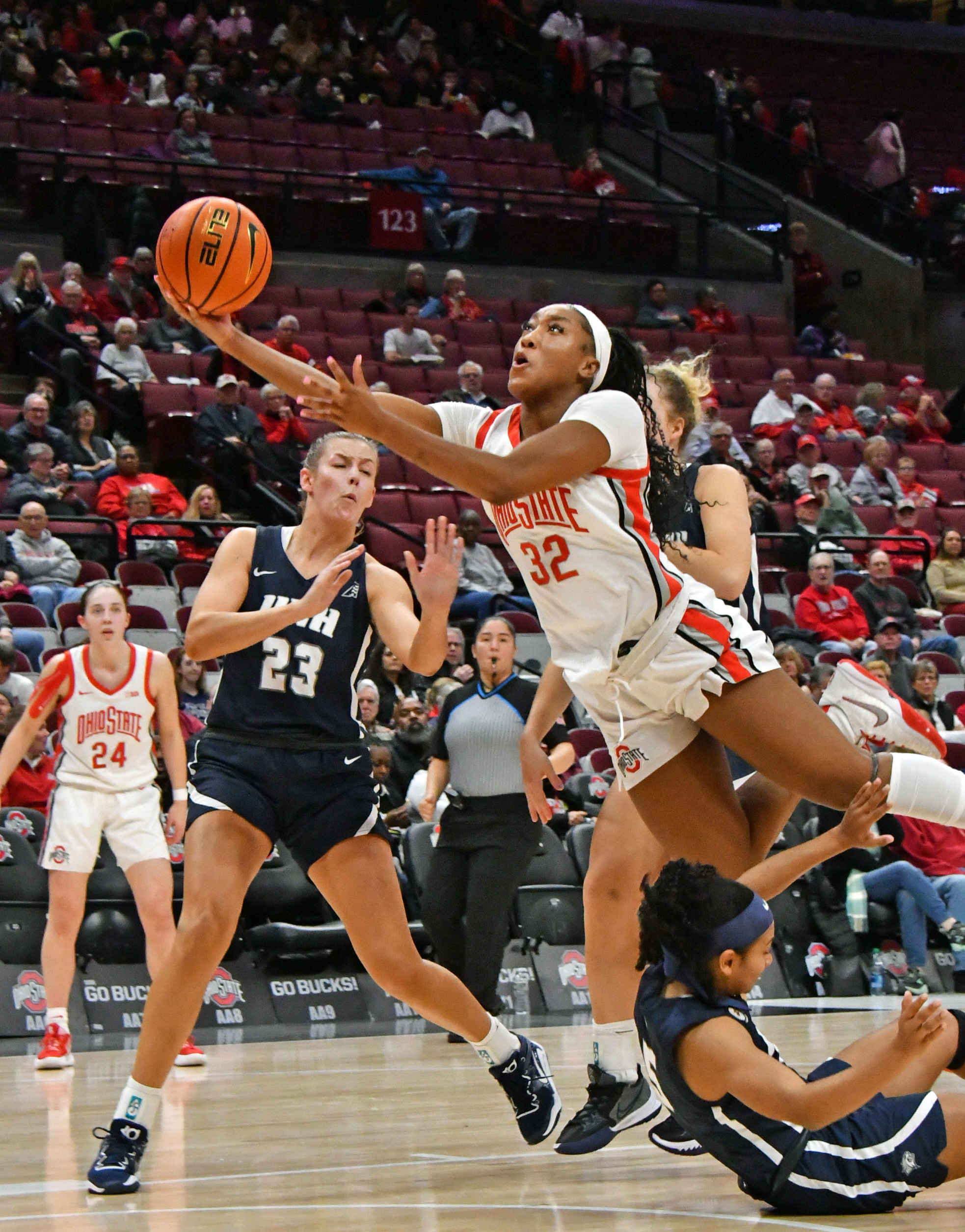 Whether it was the early 11 a.m. tip or complacency after an 8-0 start to the season, things looked out of sorts as No. 3 Ohio State went into the locker room with just a 39-29 lead against New Hampshire on Thursday.

It wasn’t what many have come to expect from Ohio State’s offense, and the Buckeyes clearly got the message, as they came out of the locker room and completely took over the game over. Ohio State outscored New Hampshire 53-7 in the second half, holding the Wildcats to just 8.7 percent shooting from the field across the final 20 minutes, to secure a 92-36 win.

Ohio State (9-0) was slow coming out of the gates and unable to develop a rhythm on offense as New Hampshire (4-7) took a 9-8 lead with 3:03 remaining in the first frame.

The Buckeyes closed the quarter on a 9-0 run – not the last big run of the game for Ohio State – but the Wildcats continued to push in the second, shooting 50.0 percent (8 of 16) from the field and adding a three-pointer from guard Breezie Williams to trail just 39-29 at the break.

Guard Taylor Mikesell led Ohio State with 11 points in the first half, but the Buckeyes as a whole shot just 41.0 percent from the field and were 3 of 11 from deep, and held just a brief advantage on the boards, leading 23-22 at the half.

Whatever discussion head coach Kevin McGuff had with the team in the locker room evidently worked, as Ohio State outscored New Hampshire 30-4 in the third quarter. After Wildcat guard Brooke Kane scored a layup with 5:56 remaining in the frame, the Buckeyes closed on 15-0 run to lead 69-33 going into the fourth.

The Wildcats were just 2 of 11 from the floor while the Buckeyes shot 70.6 percent from the field, and 5 of 9 from three-point range, during the third. Freshman forward Cotie McMahon led the Buckeyes during the quarter, adding 10 points on 4-of-6 shooting.

The fourth quarter was more domination by Ohio State, which outscored New Hampshire 23-3 in the frame for the 92-36 final. The Wildcats’ only points came on three free throws as they did not connect on any of their 12 shot attempts during the quarter.

Ohio State will return to the court Sunday, with a tip against Michigan State set for 4 p.m.