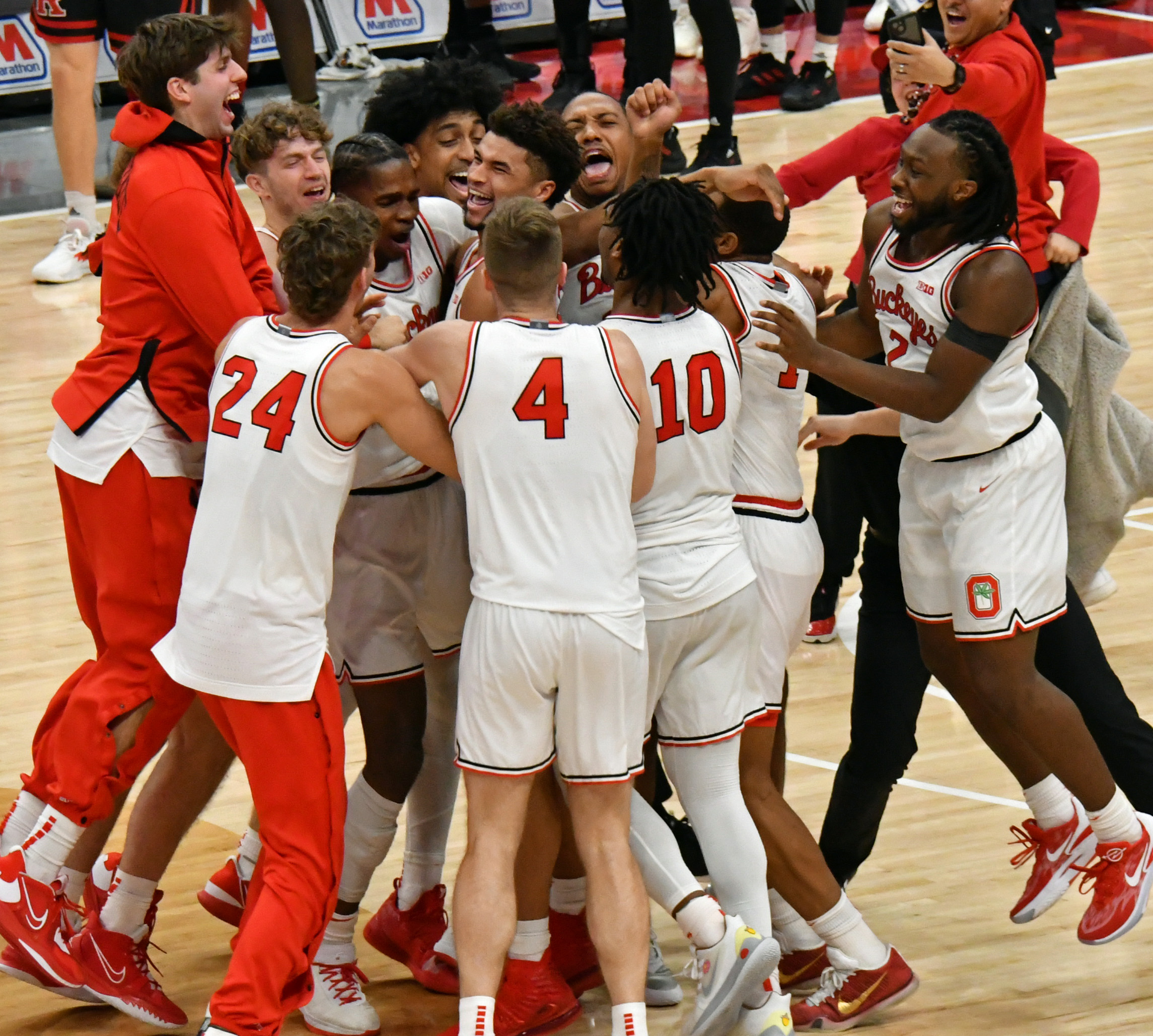 With five seconds remaining and Rutgers guard Caleb McConnell at the foul line looking to hit his second free-throw in a one-and-one opportunity with a two-point lead, Ohio State head coach Chris Holtmann turned to his bench.

Holtmann opted to replace forward Justice Sueing for transfer guard Tanner Holden, who had missed a pair of jumpers in 14:39 of play, in order to put Ohio State’s best deep inbound passer on the floor. However, there was no need for an inbound passer as McConnell’s free throw attempt bounced off the rim and into the hands of Ohio State freshman forward Brice Sensabaugh, who quickly dished it to guard Bruce Thornton. Thornton tight-roped the sideline before passing it to Holden, who pulled up from several feet beyond the arc and drilled the game-winning three-pointer at the buzzer.

From that point, pandemonium spread throughout Value City Arena as the Ohio State faithful was sent into a frenzy and Holden was mobbed by his teammates at halfcourt.

“I just so happened to get open and (Thornton) passed it to me and I shot it,” Holden said. “I couldn’t really see it because (Rutgers forward Mawot Mag) was in my way, but I just heard the crowd go crazy, and then I celebrated after that. Then, I had 15 guys rushing me.

To that point, Holden’s night had been fairly lackluster. The Wright State transfer was yet to tally a point and only had two rebounds and an assist on his stat sheet. However, his early-game struggles went out the window after his game-winner found the bottom of the net.

Junior forward Zed Key, who has experienced several tight wins during his time at Ohio State, ranked Holden’s game-winner as the greatest moment he’s had in his time with the program.

“I almost passed out,” Key said. “I was down by the block, but I couldn’t rebound because the buzzer went off. I just looked up in the air and I was like, ‘Oh, Wow. That’s going in.’ And it went in.

“I just ran. I was more tired just chasing after (Holden) than on the last possession,” he continued. “It was a great shot, a great pass by Bruce, and we got the W.”

Holden’s game-winner did not come without controversy, though. As Thornton raced down the court, Holden drifted out of bounds before reentering the court and catching the pass. Per NCAA rules, if a player goes out of bounds they must re-establish themselves by having both feet inbounds before touching the ball, and cannot be the first player to touch the ball. While Thornton possessed the ball as Holden returned to the court, he technically was not the first person to touch the ball, however, it’s unclear whether he was fully established before Thornton fired the pass.

Holden noted that he didn’t realize he ran out of bounds, but added that he was firmly inbounds prior to the shot.

After the game, Ohio State head coach Chris Holtmann was pleased with how his team handled the chaotic final seconds while noting that Holden has the ability to elevate himself in clutch situations.

“He’s a gamer, he’s made big shots his whole life,” Holtmann said. “He made a game-winning reception as a wide receiver in the state championship game, he’s just a gamer.

Holden did not remain in the moment for long, however, emphasizing that the Buckeyes need to utilize the momentum from their stunning win over Rutgers going forward as a matchup with North Carolina and the rest of their Big Ten schedule looms in the distance.

“It’s huge. For me, it’s a confidence builder,” Holden said. “That’s one game we’re going to learn from, we’re going to get back in the gym tomorrow and work on it. Overall, it’s just a good building block for us.”