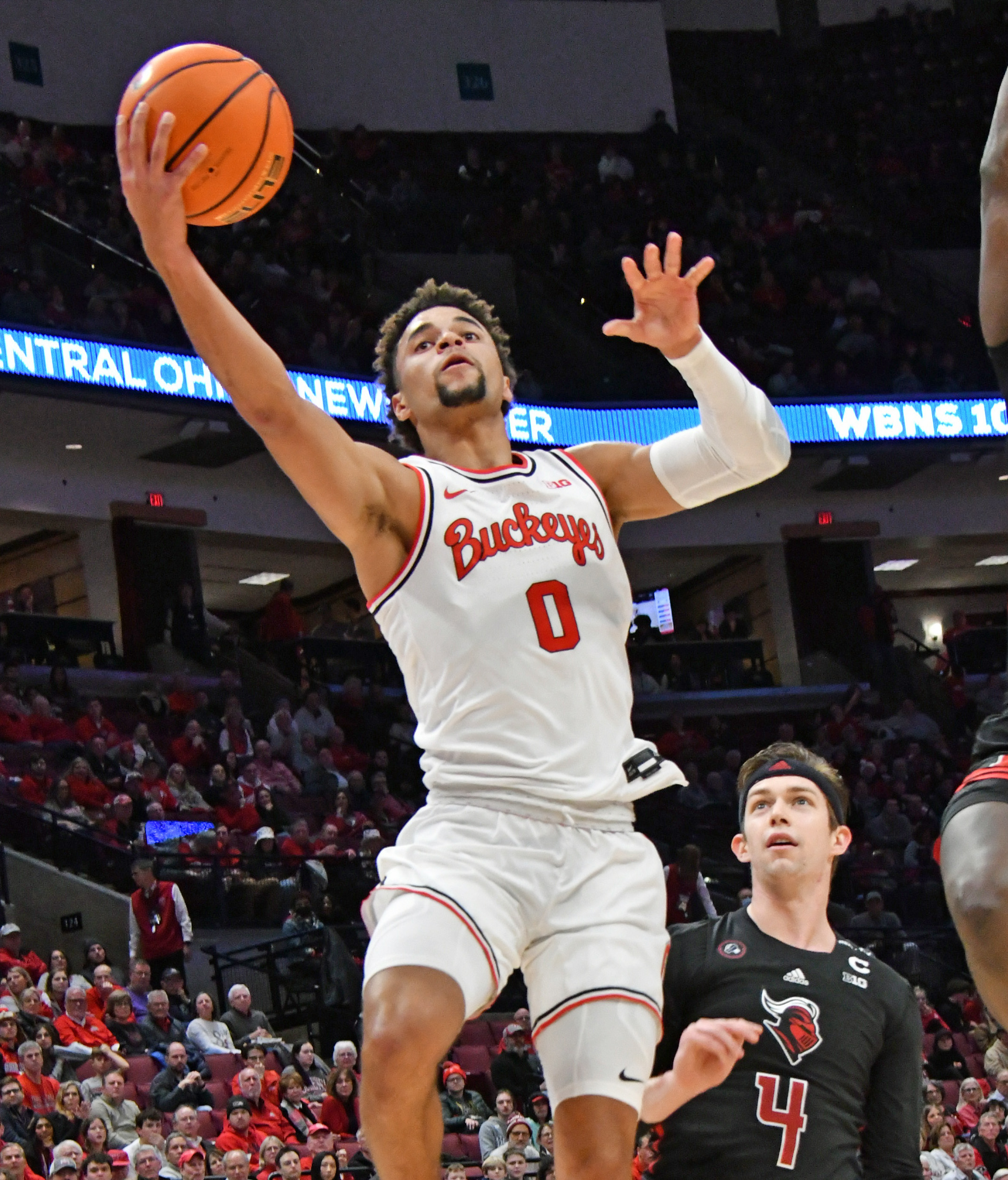 Ohio State guard Tanner Holden drilled a game-winning three-pointer at the buzzer, as the Buckeyes opened Big Ten play with a 67-66 win over Rutgers on Thursday.

While Holden’s game-winner served as his only points of the night, he noted that his clutch moment can serve as a springboard for not only himself, but also the rest of the Buckeyes, going forward this season.

“It’s huge. For me, it’s a confidence builder,” Holden said. “That’s one game we’re going to learn from, we’re going to get back in the gym tomorrow and work on it. Overall, it’s just a good building block for us.”

The game followed Rutgers’ (6-3, 1-1) typical path to victory, as the Scarlet Knights made it a low-scoring affair at Value City Arena. However, the Buckeyes (7-2, 1-0) were able to overcome the tight struggle while shooting 46.4 percent from the field and 42.1 percent from three.

Key continued to roll for the entirety of the first half, registering 15 of his game-high 22 points in the frame while helping the Buckeyes take hold of the game with a 31-20 lead with 4:06 to play in the half. However, the Scarlet Knights rattled off a 9-0 run to close the half — taking just a 31-29 deficit into the locker room. The Buckeyes were held scoreless across the half’s final 4:06 while turning the ball over four times in that span.

While the Buckeyes were led by Key’s post presence in the first half, Rutgers leaned on its own big man in the second half. Center Clifford Omoruyi scored the Scarlet Knights’ first nine points of the second half, helping Rutgers keep pace with Ohio State during the early stages of the frame. Omoruyi finished the night with 16 points and eight rebounds.

“(Omoruyi) is a really good defender, he’s very athletic and he’s a great big,” Key said. “He did a good job tonight.

“My teammates found me in the right spots, trusted me with the ball, and I was making plays.”

Ohio State and Rutgers could not gain much separation from one another during the second half, as the lead changed hands 11 times, and the teams traded buckets for much of the frame. From the 14:39 mark in the second half, neither team was able to gain more than a one-possession lead for the rest of the game.

Holding possession while down one with 23.7 seconds remaining in regulation, the Buckeyes had an opportunity to take the lead. However, freshman forward Brice Sensabaugh was blocked at the rim by Omoruyi and the Scarlet Knights cashed a pair of free throws to take a three-point lead with 7.7 seconds to play. After OSU guard Bruce Thornton cashed a pair of free throws to drop the lead to one with 5.0 seconds to go, Rutgers guard Caleb McConnell missed the second half of a one-and-one free throw opportunity. After the miss, Thornton tight-roped the sideline before firing the game-winning assist to Holden on the wing.

Ohio State head coach Chris Holtmann said much of Ohio State’s final possession was freelanced by the players, due to Rutgers disrupting the Buckeyes’ typical tendencies in those situations.

“We do practice that situation,” Holtmann said. “You want your most poised guy in that situation with the ball and Bruce is that for us.”

While Key paced Ohio State through the first half, he also gave the Buckeyes a lift on the glass as they outrebounded Rutgers 35-27. Key’s most notable efforts came on the offensive glass, where he corraled seven of his 14 boards.

Sensabaugh collected the first start of his collegiate career, picking up the nod due to the absence of guard Isaac Likekele — who was out due to personal reasons. Sensabaugh came alive in the second half, tallying 7 of his 13 points. The Orlando, Fla., native drilled three threes on four attempts in the win.

Ohio State returns to action on Dec. 17 against North Carolina in the CBS Sports Classic at Madison Square Garden in New York City. The game is set for a 3 p.m. tip on CBS.