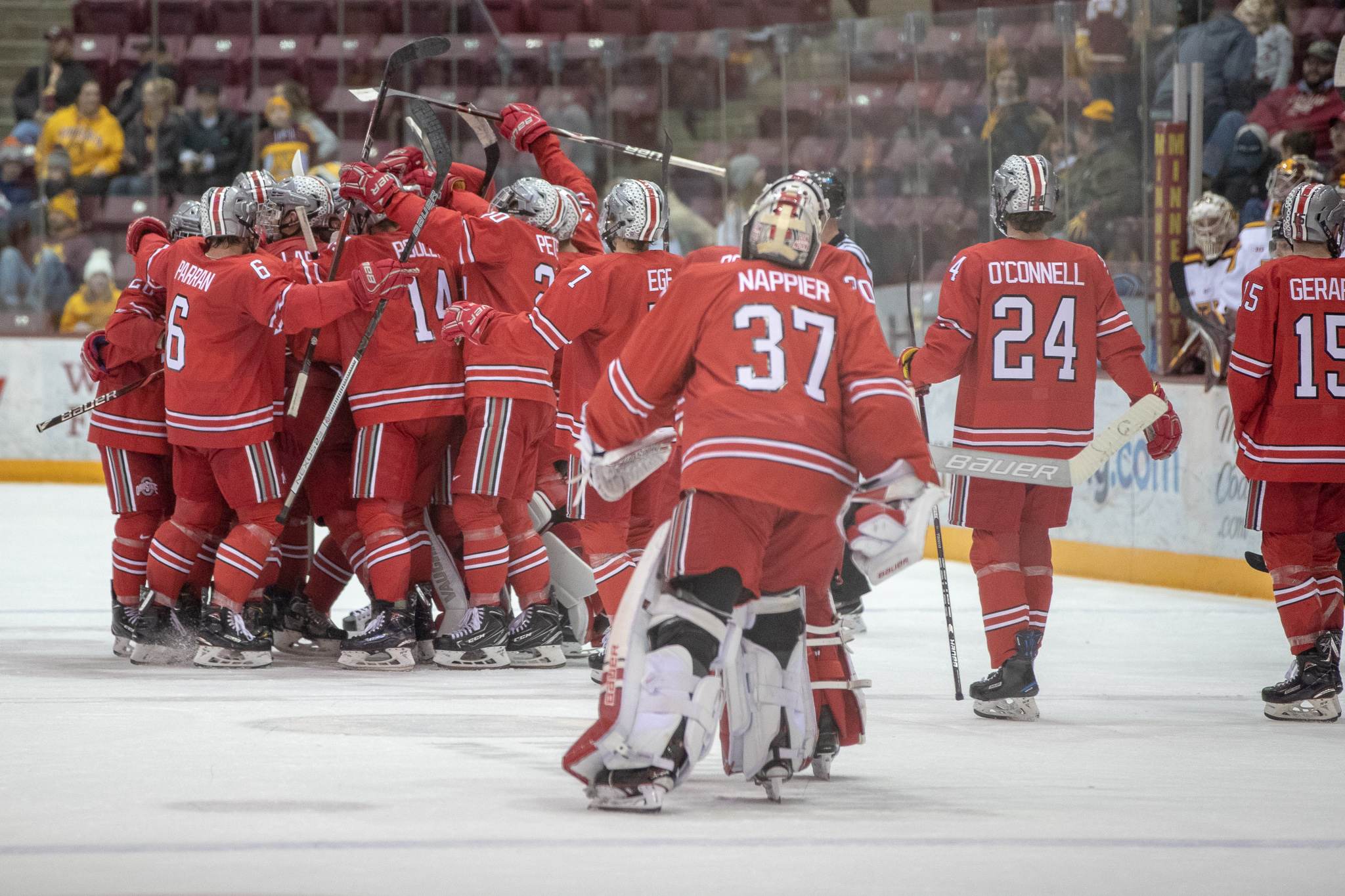 Ohio State men’s hockey earned an at-large bid to the NCAA Tournament for the third straight season and will see a familiar opponent.

“We don’t take it for granted,” OSU coach Steve Rohlik said. “I tell the guys we have to take advantage of the opportunity to play in the tournament.”

The other game has fourth-seed American International (22-16-1) playing overall top-seed St. Cloud State (30-5-3). The winners play at 9 p.m Saturday on ESPNU to  advance to the Frozen Four semifinal in Buffalo on April 11. The championship game is there April 13.

OSU last season as the Midwest’s top seed defeated defending national champion Denver 5-1 in the regional final to make its second trip to the Frozen Four in program history, the other being 1998. The Pioneers were favored but the Buckeyes dominated.

“We’re pretty familiar with Denver from last year but it’s a new year and we’ll do some research and be ready to go,” OSU senior captain Mason Jobst said. “There’s been some changes. They lost some guys, we lost some guys. It should be a good matchup.”

“To have this be the third trip in a row is special,” Jobst said. “We’re trying to set that standard here at Ohio State. “I remember coming here and at the time I just wanted to make one NCAA Tournament.”

After winning two of three games last season they have a 4-8 NCAA mark. They are 2-2 in the West Regional.

OSU in the 2018 West Regional final lost in overtime to Minnesota-Duluth. UMD beat the Buckeyes in the national semifinal last season.

“Experience means a lot this time of year,” Jobst said. “I remember our first year going, we were kind of taken aback with the competition. Now, we’re more relaxed knowing we’re going back.”

The Buckeyes were headed for another No. 1 regional seeding in March until they went on a 1-5-1 skid. Although they won the Big Ten regular-season title, the second in school history (1972, Central Collegiate Hockey Association), they struggled down the stretch, partly because they won the conference by nine points and clinched with two games to play.

“If we lose now the season’s over and the guys realize that,” Rohlik said.

The Nittany Lions were beaten 3-2 in overtime by host Notre Dame on Saturday. The Fighting Irish earned the NCAA automatic bid and as the No. 3-seed in the Northeast will play second-seed Clarkson, under head coach and former OSU assistant Casey Jones.

The Fighting Irish also defeated the Buckeyes in OT to win the Big Ten tourney last season and are the first school to win it twice in the seven-year history of the conference. OSU and Notre Dame are the only Big Ten schools in the NCAAs this season after four teams qualified last season with the Buckeyes, Irish and Michigan reaching the Frozen Four.

OSU and Notre Dame could meet in the Frozen Four semifinal.

Besides Notre Dame, the Buckeyes played three other schools in the 16-team field this season: They swept Arizona State, the three-seed playing in the Midwest vs. Quinnipiac; split with Massachusetts, which is first in the Northeast and plays Harvard; and went 0-1-1 vs. Bowling Green, the fourth-seed in the Midwest, who faces Minnesota Duluth.

“It’s one-and-done now,” Jobst said. “This senior class, especially we’re going to be laying it all out there on the line trying to lead by example and hopefully the young guys will follow and see how much it means to us.”