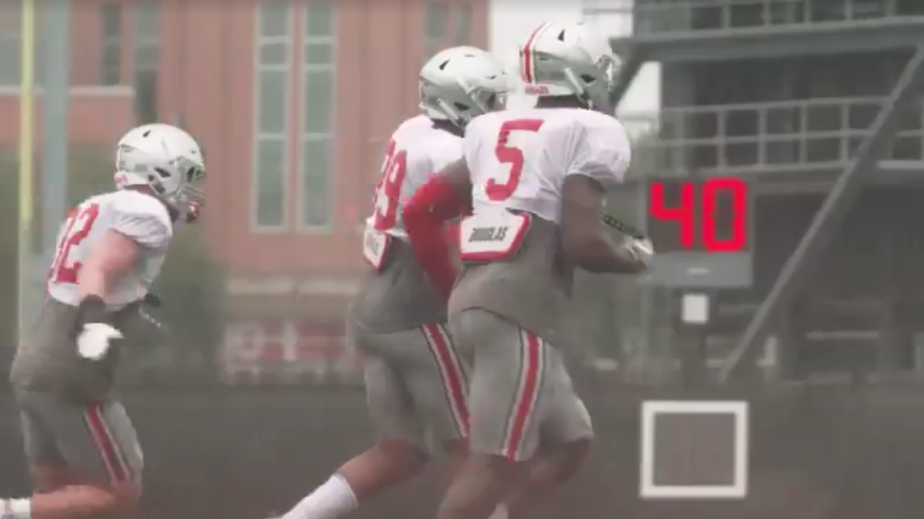 Through the Twitter accounts of the Ohio State football team and creative media/post-production director Zach Swartz, the Buckeyes published a handful of videos and photos from their 12th practice of fall camp Thursday on the outdoor turf fields at the Woody Hayes Athletic Center.

OSU continues to block media access as the independent board’s investigation into head coach Urban Meyer nears the end of its 14-day timeline, but acting head coach Ryan Day and the staff have evidently kept the players relaxed and focused through the halfway point of August.

In the latest workout, which changed with rain in the forecast from its original location on the grass fields at Coffey Road Park, the subsequent highlights revealed a few takeaways as Ohio State approaches the two-week window from the Sept. 1 season opener against Oregon State.

In the midst of Swartz’s short clip, before junior linebacker Malik Harrison’s handshake with junior safety Jordan Fuller, sophomore linebackers Tuf Borland and Baron Browning trot out with Harrison — as what looks like the first-team defense seems to take the field for an 11-on-11 period. Borland obviously plays in the middle, so Browning potentially pushed back to the weak side while Harrison stayed on the strong side.

Borland, who has been recovering from an Achilles injury that cut his spring camp short and left him slated to return in late September, appears to be ahead of schedule as he continues to work back for the Buckeyes.

When the media saw him Aug. 7 at OSU’s fourth practice, Borland flew around during individual drills. However, it was unclear whether or not he was also involved in the team period.

Although an update on his status will have to wait, the several seconds showed a good sign for Ohio State.

Redshirt freshman quarterback Tate Martell finds fifth-year senior wide receiver Johnnie Dixon for a touchdown past the outstretched arms of sophomore cornerback Jeffrey Okudah as sophomore safety Brendon White trails behind during what appears to be a 7-on-7 drill down in the red zone.

The ball from Martell was on the money for Dixon, who had fun with the play on Twitter after practice.

Junior defensive tackle Davon Hamilton dominates fifth-year senior offensive guard Malcolm Pridgeon in a 1-on-1 matchup between the linemen. Hamilton, who is due for a bigger role on the defensive line, provided a glimpse at how he plans to get after his 2018 campaign.

Last but not least, fifth-year senior kicker Sean Nuernberger nailed a field goal up the middle to end practice. The kick, though, came with high stakes as Nuernberger made good on Day’s offer to cancel meetings and instead take the team out for Jay-Z and Beyoncé’s OTR II concert at Ohio Stadium.

#BuckeyeNation it's time to get in formation ????

The Bucks are in the building.

Junior cornerback Alex Badine, like Jay-Z, is from Brooklyn, N.Y., and reacted accordingly to Nuernberger splitting the uprights. Badine broke out in a celebratory dance and imitation — the latter of which he first did Wednesday before OSU and director of player development Ryan Stamper in the WHAC team room.

No one is more excited to have @S_C_ & @Beyonce in town tonight than @AlexBadineJr ???? pic.twitter.com/ot2oNnYdeN