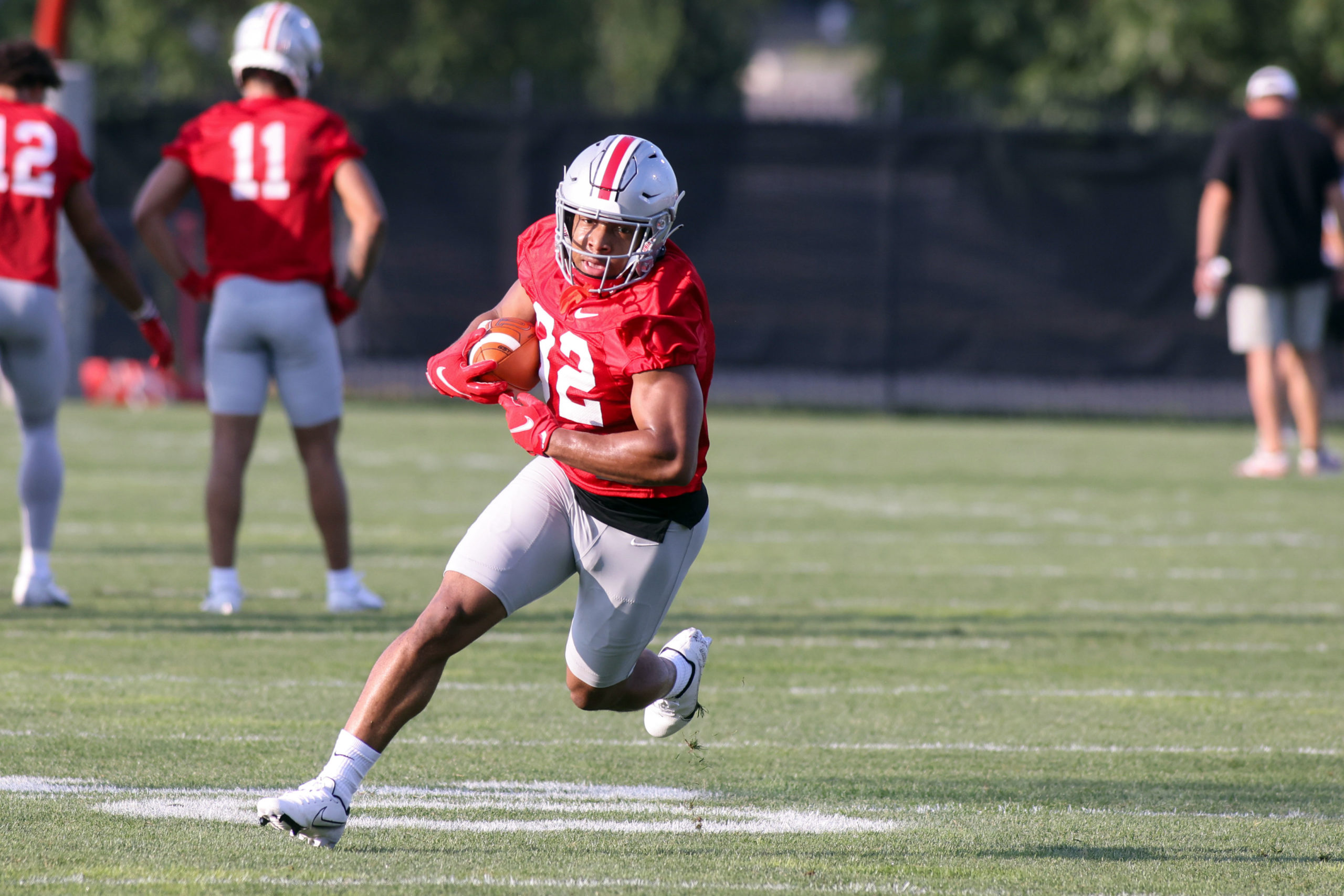 Cut on a highlight tape of TreVeyon Henderson’s junior season at Hopewell High School in Virginia and it’s clear to see the young running back has a penchant for dazzling crowds on the football field.

The true freshman Buckeye hasn’t had the chance to do so in a scarlet and gray uniform yet, aside from the handful of touches he received in April’s spring game, but running backs coach Tony Alford said Wednesday that Henderson has displayed his flair for the spectacular a time or two in Ohio State practices this offseason.

“He’s had a few of those wild moments,” Alford said with a smile.

There’s no guarantee of significant carries for Henderson this season, given that he’s one of five running backs in Alford’s room competing for a spot at or near the top of the depth chart, but as the lone five-star prospect of the bunch, Henderson may have the brightest future of the bunch.

Internally, Henderson has his sights set on high bars at Ohio State. He’s just not willing to define exactly what those are quite yet.

Alford isn’t setting any markers for Henderson to clear as a true freshman either. The seventh-year Buckeye assistant coach may have them tucked away in his head, but Alford said Henderson will achieve everything he is supposed to as long as he focuses on himself and maximizes his opportunities.

“I don’t want to put those expectations out like that,” Alford said. “The expectation for TreVeyon and Master and Marcus and Miyan is the same as it is for Mike Hall; to be the best version of them that they can be every single day, and to try to help this football team be as successful as it can be every single day. But to put some outside influences and pressures on them, I just don’t think that’s fair. But I think you can get what you want –– again, it goes back to being the best version of yourself. That’s gonna be good enough.”

Don’t think a lack of clearly defined goals from Alford takes any pressure off of Henderson though.

To find his niche in the Buckeye offense in 2021, he’ll have to prove just as reliable –– if not more so –– than the incumbent starter in Teague, a promising former four-star talent in Crowley and an overachieving in-state prospect in Williams, who has already come up big in a couple postseason moments for the Buckeyes.

“Whatever it takes to win games, that’s what we’re gonna do,” Alford said. “We’re not into making guys happy, this isn’t a happy camp. We’re gonna do whatever we need to do to win football games, whatever that looks like. We haven’t solidified exactly how that’s gonna go yet as far as rep counts, but that’ll play itself out.”

What does Henderson need to do to set himself apart? Far more than just stand out on the field, Alford said, although that won’t hurt his case to get opportunities early in his career.

“You have to continually make plays. Continually show the staff and the football team that you can be trusted,” Alford said. “We talk about competitive excellence, when your number is called, are you going to deliver? As a young guy, you have to be able to deliver. And that’s in special teams, that’s in meetings, if we ask you a question in a meeting, it’s everything. It’s not just on the field. It’s everything. Are you accountable in the weight room? Are you accountable in meetings? Are you accountable to get to where you’re supposed to be on time? They tell you to weigh in, did you weigh in? Did you do all the little things correctly that are gonna eventually evolve into doing the big things?”

Henderson said the biggest adjustment thus far has been the speed of the college game, and it appears as though he’ll face it in more phases than one as he has taken reps as the Buckeyes’ first-team kick returner this fall.

He isn’t shying away from competition at either spot though, and Henderson said he actually thrives in such an environment.

“It’s all about competing, getting better each and every day,” Henderson said. “You can’t take a day off, you can’t waste a day because if you waste a day, that next running back, he’s not wasting a day. He’s trying to get better.”

Alford has come to no final conclusion in terms of a running back pecking order, although he said he has begun formulating his own opinions on the matter at this stage of the preseason.

It may be unlikely to think Henderson will take the first snap for Ohio State in 2021, but the Virginia native is hoping for a chance to show what he can do nonetheless.

“Hopefully I get to make an immediate impact,” Henderson said. “That’s all I’m hoping for.”