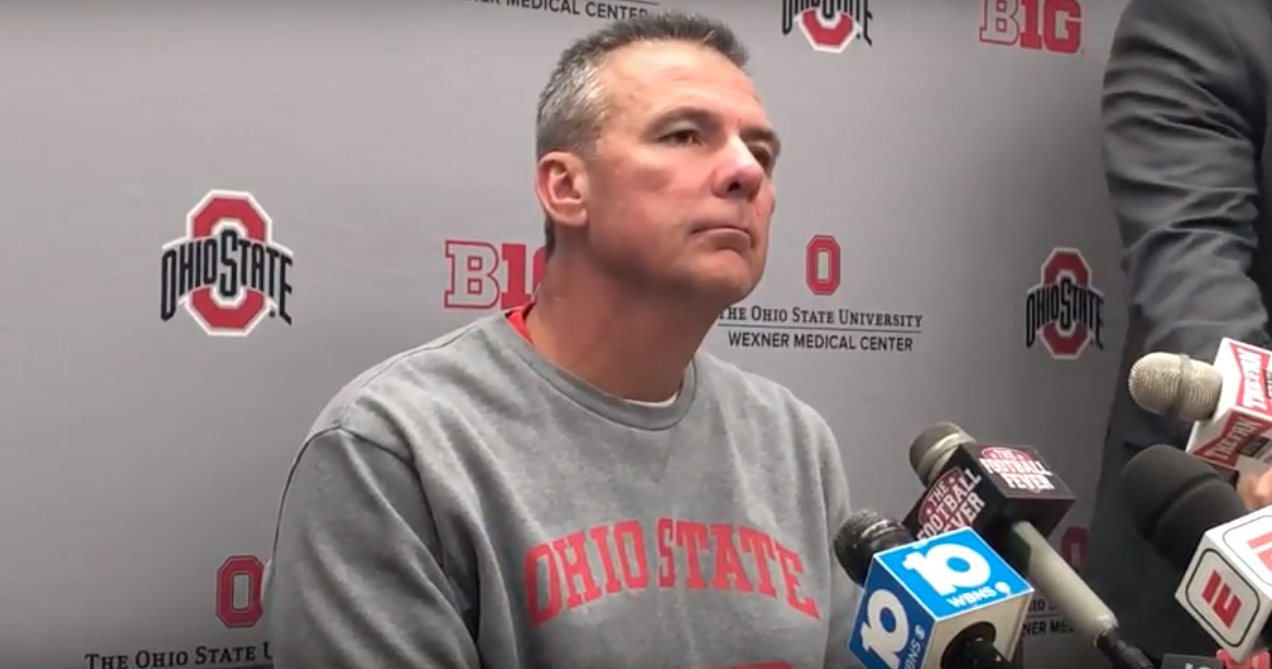 WEST LAFAYETTE, Ind. — After its 49-20 shellacking Saturday at Purdue, No. 2 Ohio State left Ross-Ade Stadium with more questions than answers. As the party began between the Boilermakers (4-3, 3-1 Big Ten) and fans on the field, head coach Urban Meyer and the Buckeyes (7-1, 4-1) tried to make sense of the shocking loss. Video and transcript included, below is Meyer’s postgame press conference in full.

How surprised are you by this performance?

“How surprised? Very surprised. I thought we had a good week of work. The glaring shortcomings that we have, like you said, we’re exposed. The No. 1 off the top of my head is the our red-zone offense. You go down there a few times, two field goals and one missed field goal, you’ve got to score points. We’ve never had this issue, so we’re going to get a real thorough evaluation of that and big plays on defense.”

“No, not at all. It’s just — I look up at the board and it’s rushing yardage again. We’ve just got to get something going. You can’t just throw for 400 yards. That’s worked a few times, but down the stretch here, we’ve got to get some run game.”

So you can’t be dependent on him only?

Is this something you can fix in two weeks?

The problems are easy. You can see what’s?

Why is this staff capable of getting stuff fixed when you’ve already played seven games?

A lot of teams run the ball out of the shotgun. Why is it such an issue for this team?

“If it was that easy — a one-sentence answer — I’d give it to you. But it’s not that easy of an answer, so we’re going to work real hard and get it fixed.”

Did you think that something like this was looming?

Is there a sense that some things need to be blown up in the next two weeks or that there needs to be some drastic changes? What’s your thought as you leave here?

How much do you have to assess your coaching staff and can you evaluate the job they did in getting this team prepared for this game?

“That’s part of this whole week and I do love our coaching staff and want to make sure we’re going to have a lot of work get done this week.”

Have there been times during your career when you’ve made drastic changes in scheme or the way you’re attacking teams in the middle of the year? If you decide to do that, how hard or difficult is that to do?

“Bye week gives you a little bit of time, but you’re week … eight, nine, you’re into it now. No. 1 thing you’ve got to find out about the health of our team and that’s hard to do right now — to make drastic changes when you’re dealing with a banged up football team.”

Why were there so many penalties for you guys tonight?

“That’s not the first — we had a handful of them a couple games ago and that’s been an issue this year. The one — the punt, to run into the punter, that’s one of those ones you just — I can’t remember the score at the time — but I think it was still within (striking distance). … Just not very disciplined and I think they’re effort penalties, but just ridiculous.”

What did you have called on the fake field goal and what didn’t get executed? Put you in a big hole down 11.

“What was the score when they went?”

“10-3, yeah. I think we had just missed a field goal, right? … That was a – obviously we have a little bit of a tendency there and they executed and we did not. Those are all part of things I’ve got to evaluate.”