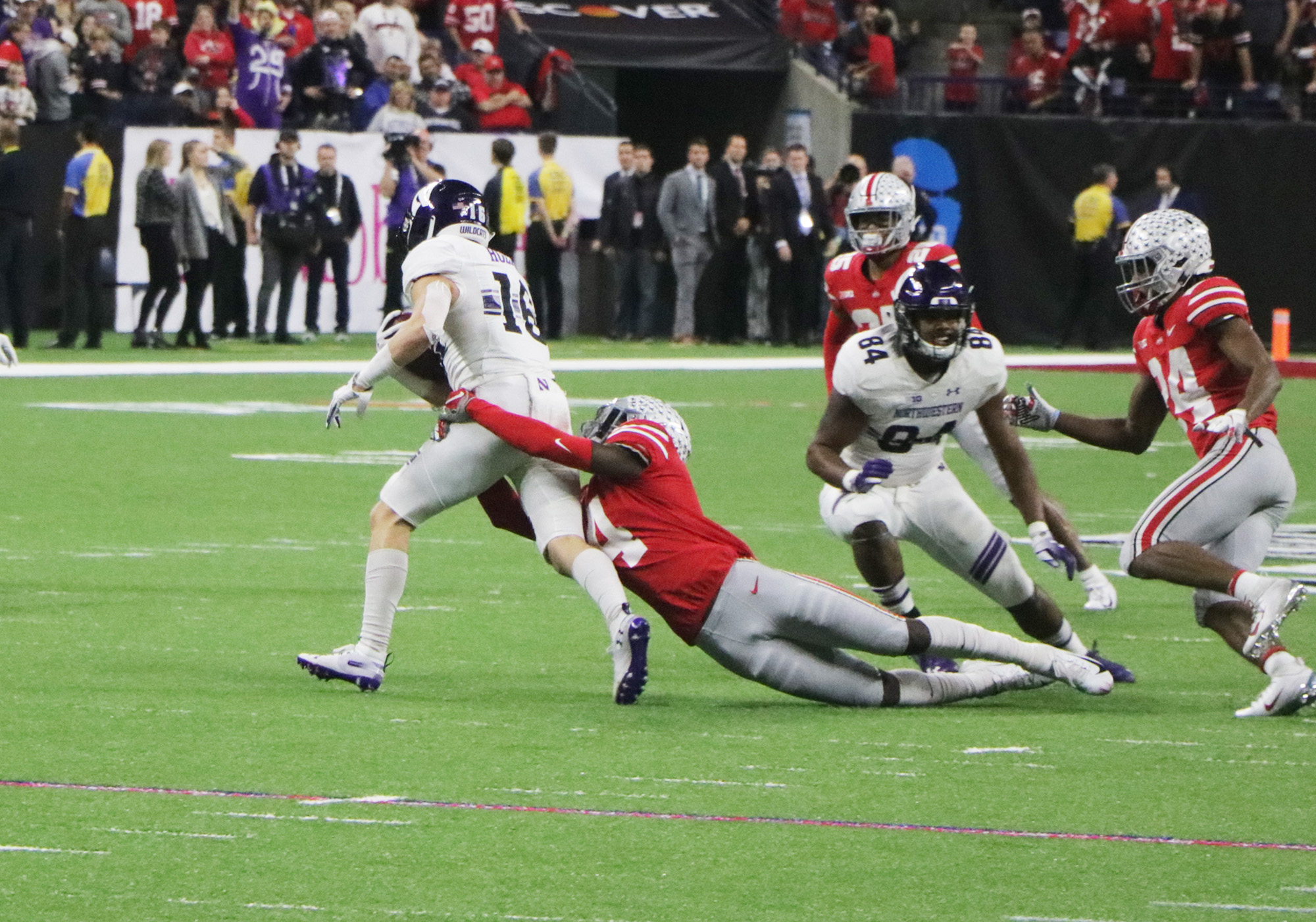 Dwayne Haskins was spectacular again with a school-record 499 passing yards to go along with five touchdowns as No. 6 Ohio State held off stubborn No. 21 Northwestern 45-24 in the Big Ten Championship at Lucas Oil Stadium in Indianapolis on Saturday.

The Buckeyes (12-1) won the title game for the second straight season and third time in five seasons, but it wasn’t easy.

Northwestern (8-5), in its first championship, trailed 24-7 at the half before making it 24-21 midway through the third quarter.

Ohio State went into the game knowing No. 5 Oklahoma (12-1) had beaten Texas 39-27 in the Big 12 championship, shrinking the Buckeyes’ chances to earn a bid to the College Football Playoff. Also, No. 4 Georgia losing close a tight game to top-ranked Alabama, 35-28, in the SEC championship, likely damaged their hopes.

Haskins was 34 for 41 with one interception.

Northwestern quarterback Clayton Thorson was 27 for 44 for 267 yards, a TD and two touchdowns.

Campbell was the go-to man with catches of 14, 11 and 16 yards for a first down at the NU 26. Dobb ran for 11 and another first at the 15.  Dobbins lost 3 on a run and a Haskins’ carry gained only two back before he scrambled to his right for a 16-yard touchdown pass to McLaurin.

Following a Northwestern three-and-out, the Buckeyes thought they had something going with a 27-yard reception by junior K.J. Hill to the NU 31, but a personal foul on senior right tackle Isaiah Prince nullified the yardage and sophomore Drue Chrisman boomed a 58-yard punt for a touchback.

On the Wildcats’ second play, John Moten IV burst through the right side 77 yards to make it 7-7 at 6:27 of the first quarter. He finished with 76 yards on four carries.

Dixon had a 13-yard grab, McLaurin snared a 20-yard pass and junior Binjimen Victor made a catch for 17 yards to the Northwestern 2 before Dobbins scored on the next play.

There was an exchange of interceptions without consequences, but the Buckeyes took advantage of a Thorson fumble to go ahead 17-7 with a 42-yard field by sophomore Blake Haubeil with 6:09 left to go in the half.

Sophomore defensive end Chase Young sacked Thorson as he was attempting to throw. The play was initially ruled incomplete but reversed after video review.

The Buckeyes got the ball at the NU 46 and got one first down but failed to convert a third-and-13 from the 31.

OSU got the ball back at its 22 after a punt with 5:14 before the half and Weber ripped off 12 yards on the first snap. Haskins had consecutive completions of 10 to Campbell, 11 to Dixon and six to Victor.

Another penalty on Prince moved the ball back to the Northwestern 42 and Haskins faced third-and-20 when he threw a pinpoint pass down the right sideline to McLaurin in stride for the touchdown to make it 24-7 with 1:21 remaining. The drive was nine plays, 78 yards in 3:58.

Northwestern exploded out of the gate to start the third quarter to pull to within 24-21.

Haskins was sacked on OSU’s next possession and Chrisman’s 45-yard punt put Northwestern at its 15. The Wildcats marched 85 yards in 11 plays in 3:24 and used a controversial review to pull to within 24-21 with 8:03 left in the third on a Thorson pass to Cameron Green of two yards.

During the series, Thorson had a 17-yard pass to Charlie Fessler to the OSU 3 that was first ruled a fumble recovery for junior cornerback Damon Arnette after he pried the ball free. However, the call was reversed when it was determined that Fessler’s knee barely touched the ground before he lost the ball.

OSU punted on its next possession, but Thorson was intercepted by Arnette at the NU 35 and returned a yard. The Buckeyes squandered the turnover when Weber lost a fumble at the Wildcats 19 that was recovered by Travis Whillock at the 22.

The Buckeyes attempt to extend the lead then failed when a 27-yard field goal by Haubeil was blocked early in the fourth quarter.

Northwestern used 33-yard pass to Jelani Roberts to ignite the Wildcats after the block. Thorson added a pass of 15 yards to Bennett Skowronek to the OSU 32 and a pass interference on freshman safety Shaun Wade put the ball at the 17.

Bowser ran 11 yards to the 6 for a first down. He rushed for two, but back-to-back incomplete passes forced a 21-yard field goal by Charlie Kuhbander with 10:34 left in the game for a 31-24 score.

He found Dixon down the middle for 63 yards to the 15. Weber carried for six yards before Dixon had a 9-yard TD catch.

Haskins completed the scoring with a 17-yard scoring strike to Dobbins with 4:09 left. On the previous play he had a19-yard pass to Olave. The drive was eight plays, 54 yards and 2:32.

Northwestern punted and the Buckeyes got seven yards from Weber before two kneels to end the game at the OSU 32.