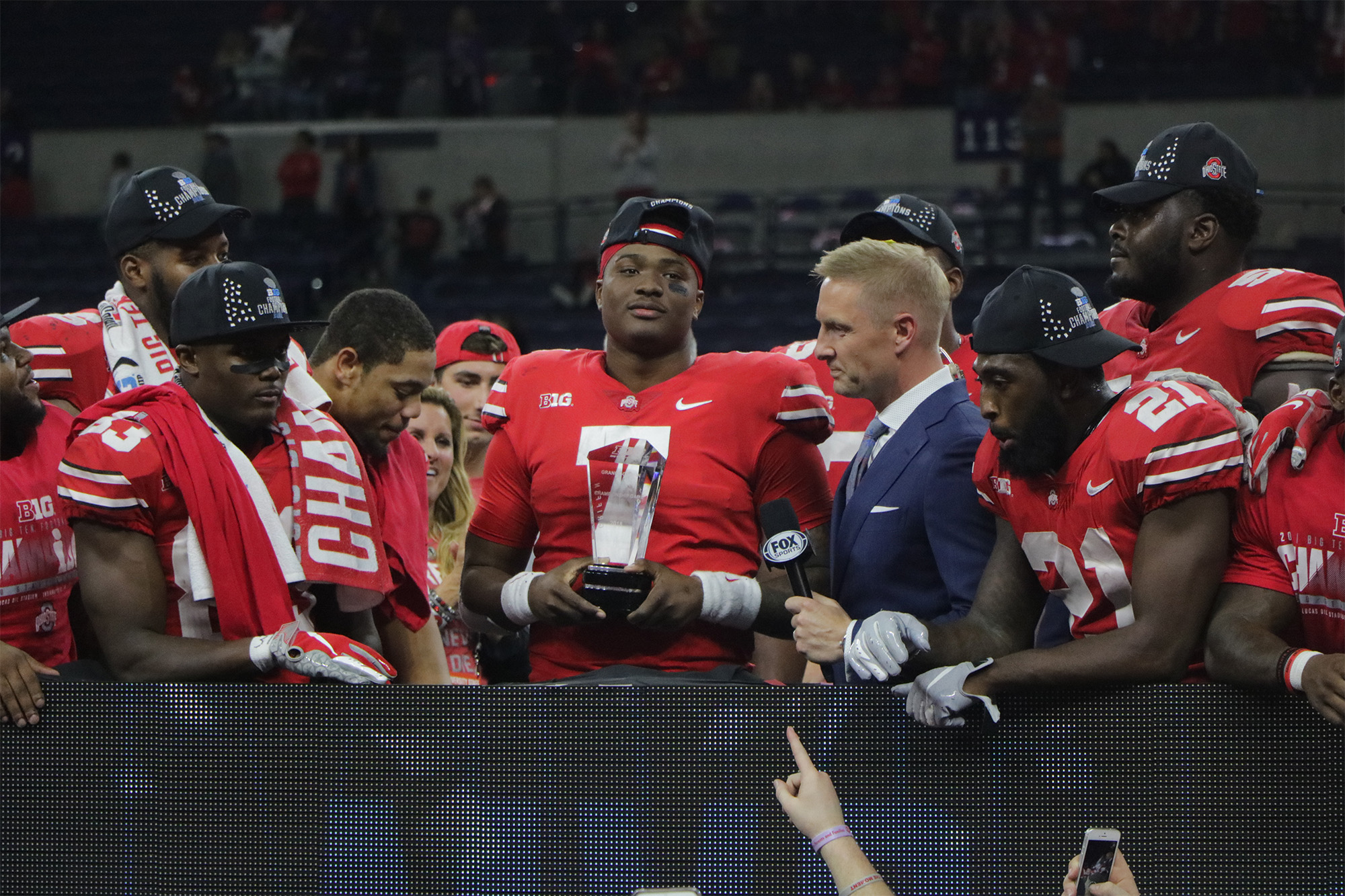 INDIANAPOLIS – No. 6 Ohio State went up, 24-7, at halftime of the Big Ten championship game and held off a second-half surge from Northwestern for a 45-24 victory and a second conference title in a row.

The Buckeyes (12-1) clinched a berth in the Rose Bowl and kept their name in the mind of the College Football Playoff committee for at least a few more hours. After the victory, the BSB staff handed out Buckeye Leaves for the game’s top performers. Here’s what they had to say:

It’s not creative, but I don’t care.

Dwayne Haskins was the best player on the field the entire game and there wasn’t any debate. The only debate is whether or not he was the best player in the country on Saturday and perhaps all season. While it will be tough for him to pass the likes of Tua Tagovailoa and Kyler Murray in the Heisman race, he shined for four hours in Indianapolis and put together the best performance ever by a Buckeye QB.

His 499 yards passing and his work extending plays was as impressive as I have ever seen and his numbers are difficult to emulate in video games. Every time Ohio State needed a big throw, he made it and his receivers rarely let him down.

He was the best player on the field, in the conference and might be the best in the country, so it is only fitting he gets the final Buckeye Leaf of the season, or at least until the bowl game.

Chase Young came up huge for the Buckeyes against Northwestern. So did Dre’Mont Jones, Johnnie Dixon, J.K. Dobbins and any number of other players. But there was only one guy who threw for 499 yards and five touchdowns.

Sophomore quarterback Dwayne Haskins, as he has been so often this year, was Ohio State’s most valuable player. He made NFL-caliber throw after NFL-caliber throw, setting a new school record for single-game passing yardage in the process. There’s never been a quarterback quite like Haskins at Ohio State, and the Buckeyes probably wouldn’t be Big Ten champions without him.

Chase Young had three sacks and a forced fumble, and even those numbers don’t do justice to how much of an impact the sophomore defensive end had in Ohio State’s win over Northwestern. While the Buckeyes proved prone to big plays once again, they held off the Wildcats because their front seven showed up, starting with Young. The 6-5, 265-pounder has flashed in spurts over the course of the season and is coming up big for OSU down the stretch when its defense has desperately needed the boost.

Ohio State was sleepwalking through the third quarter as Northwestern crept back into a 24-21 ballgame, but the Buckeyes got the wake-up call they needed when Young’s pressure off the edge got a hand on Clayton Thorson’s arm and led to junior cornerback Damon Arnette’s interception. Junior running back Mike Weber handed the ball back to the Wildcats when he coughed up his fumble on the ensuing possession, but OSU’s defense answered by forcing a three-and-out. Sophomore quarterback Dwayne Haskins’ 29-yard touchdown pass to freshman wide receiver Chris Olave put Ohio State up 10 points, eventually keeping Northwestern out of reach, but Young’s play was perhaps the biggest part of pulling away.

Damon Arnette deserves a Buckeye Leaf for his performance in the Big Ten Championship game. The junior cornerback struggled on Northwestern’s first drive of the second half, getting beat on consecutive passes of 16 and 17 yards. The Wildcats capitalized with a touchdown, cutting the deficit to 24-14 and on their next drive, Clayton Thorson went at Arnette again. Wildcat wideout Charlie Fessler appeared to push off Arnette to make a 17-yard catch at the OSU 3 before the Buckeye corner ripped the ball out of the receiver’s hands. A fumble was ruled on the field, but it was overturned and Northwestern was able to cut the lead to 24-21. After Ohio State went three-and-out, the pressure was on Arnette and the defense. Then Arnette made perhaps the best play of his career, picking off Thorson and signalling the beginning of the end for Northwestern. The Buckeyes outscored the Wildcats 21-3 to seal the game, and Arnette finished with four solo tackles and the interception.