Haskins and Weber lead No. 5 Ohio State to 77-31 win over Oregon State in season opener 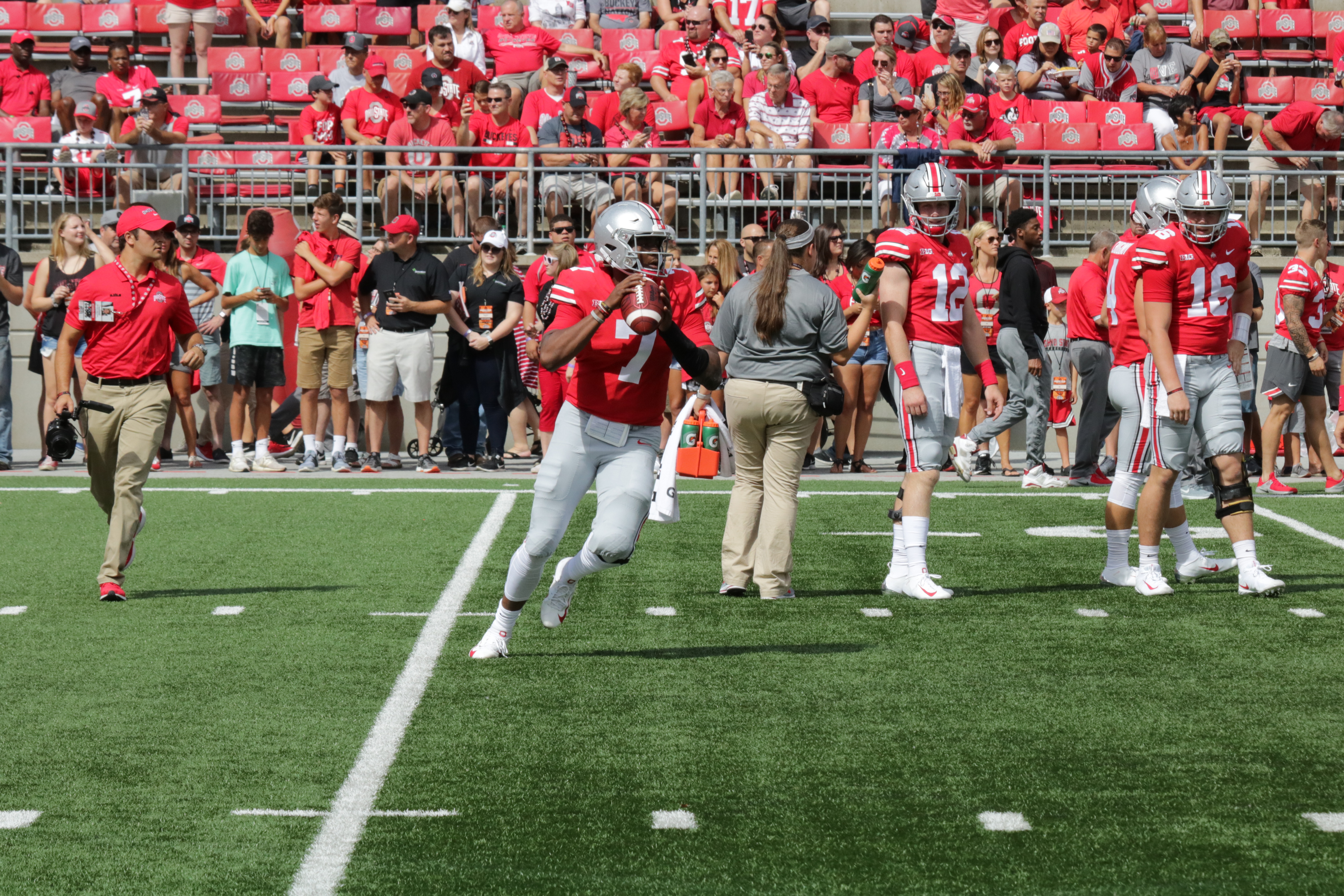 The 129th season of Ohio State football opened Sept. 1 like no other in its storied history.

While there have been many instances where the Buckeyes had to replace star players, such as this season with sophomore quarterback Dwayne Haskins having the unenviable task of taking over for multi-record holder J.T. Barrett, there hasn’t been a scenario where the head coach was suspended for the three games.

After an offseason of uncertainty concerning the performance on the field and a scandal that rocked the athletic department, there was one thing that did not change as the No. 5 Buckeyes behind five touchdown passes by sophomore Dwayne Haskins rolled to 77-31 win over Oregon State before a crowd of 102,169 at Ohio Stadium on Saturday.

Ohio State’s 899th victory in program history was the 19th straight in season openers back to 2000. The Buckeyes have also won 31 season-opening games at home.

Head coach Urban Meyer was not present for the victory. He was issued the suspension Aug. 22 for his handling of former wide receivers coach Zach Smith, who was fired a month earlier after allegations of domestic violence against his ex-wife were revealed.

Haskins was 22 for 30 for 313 yards and a third-quarter interception. Junior Mike Weber rushed for 186 yards on 20 carries with three TDs plus a touchdown catch.

Oregon State running back Artavis Pierce had 158 of his xx yards on TD runs of 80 and 78 yards in the third quarter. Quarterback Conor Blount was 12 for 19 for 169 yards and two touchdowns.

Ohio State wasted little time getting on the board following a fumble by Beavers quarterback Jake Luton on their first series.

Junior defensive end Nick Bosa recovered at the Ohio State 43 and the Buckeyes, aided by a 15-yard penalty for grabbing the facemask, used five plays and 1:19 to go the 57 yards. Haskins found senior receiver Terry McLaurin across the middle for 27 yards to the 6 and a play later connected with him for a 2-yard scoring strike with 11:17 left in the first quarter.

Oregon State responded even quicker, scoring on its third play after a fair catch on the kickoff  put the ball on the 25 (a new rule this season). Quarterback Conor Blount on his first drive passed 26 yards to Pierce, then hit Trevon Bradford on a slant and he ran unimpeded for a 49-yard TD to make it 7-7 at the 10:35 mark.

Weber replaced sophomore J.K. Dobbins when the Buckeyes got the ball back and he had runs of 11 and 16 yards, the latter for a 14-7 lead with 8:20 to go in the opening stanza.

By the time the Buckeyes had a 21-7 lead with 3:41 left in the first, Haskins had completed 10 of 11 for 114 yards. He completed an eight-play, 75-yard march with a roll to the right and a toss to junior tight end Rashod Berry for his second TD pass. Haskins also had a 17-yard completion to junior K.J. Hill to start the drive.

After Oregon State failed to take advantage of fumbled punt return by junior C.J. Saunders that was recovered by Kee Whetzel at the Ohio State 24. The Beavers had to settle for a 43-yard field goal attempt by Jordan Choukair that he missed.

The Buckeyes made the Beavers pay on their next possession when Weber emphatically finished a 75-yard drive with 49-yard TD run with 12:25 left in the second quarter to make it 28-7.

Ohio State redshirt freshman QB Tate Martell made his debut with 10:51 left in the second quarter. After he ran for no gain and Dobbins went for 2 yards, Haskins returned on third down and passed 18 yards to Hill, then threw 20 yards to junior Austin Mack, his third completion of 20 or more yards, to put the ball at the Oregon State 8.

Two plays later from the 3, Weber and Dobbins were in the backfield together. Haskins made a short throw to Weber, who went around the right end and Haskins had his third TD pass and the Buckeyes a 35-7 lead.

The Buckeyes increased the margin to 42-7 with 4:30 remaining before the marching band show thanks to a 65-yard punt by sophomore Drue Chrisman that put the ball on the Oregon State 3. On second-and-7 from the 6, junior defensive tackle Dre’Mont Jones and sophomore linebacker Pete Werner converged on Blount.

He fumbled, Bosa pounced on it at the 1 and fell into the end zone to make it 42-7. Bosa had two sacks and two fumble recoveries in the first half.

After a 72-minute weather delay at halftime, the game got crazy. The Buckeyes started at their 25 and on the first play, McLaurin took a reception at the 33 and went the distance for a 49-14 lead.

Oregon State began the ensuing series at the 20 and Artavis Pierce took the handoff on the first snap and ran 80 yards for the score to complete a stretch of two TDs in 19 seconds.

Back came the Buckeyes as senior Parris Campbell had an 8-yard TD catch before Pierce shredded the defense for 78-yard TD to make it 56-28. Following a Haskins’ interception, the Beavers pulled two within 56-31 on a 23-yard field goal by Choukair with 5:25 left in the third quarter.