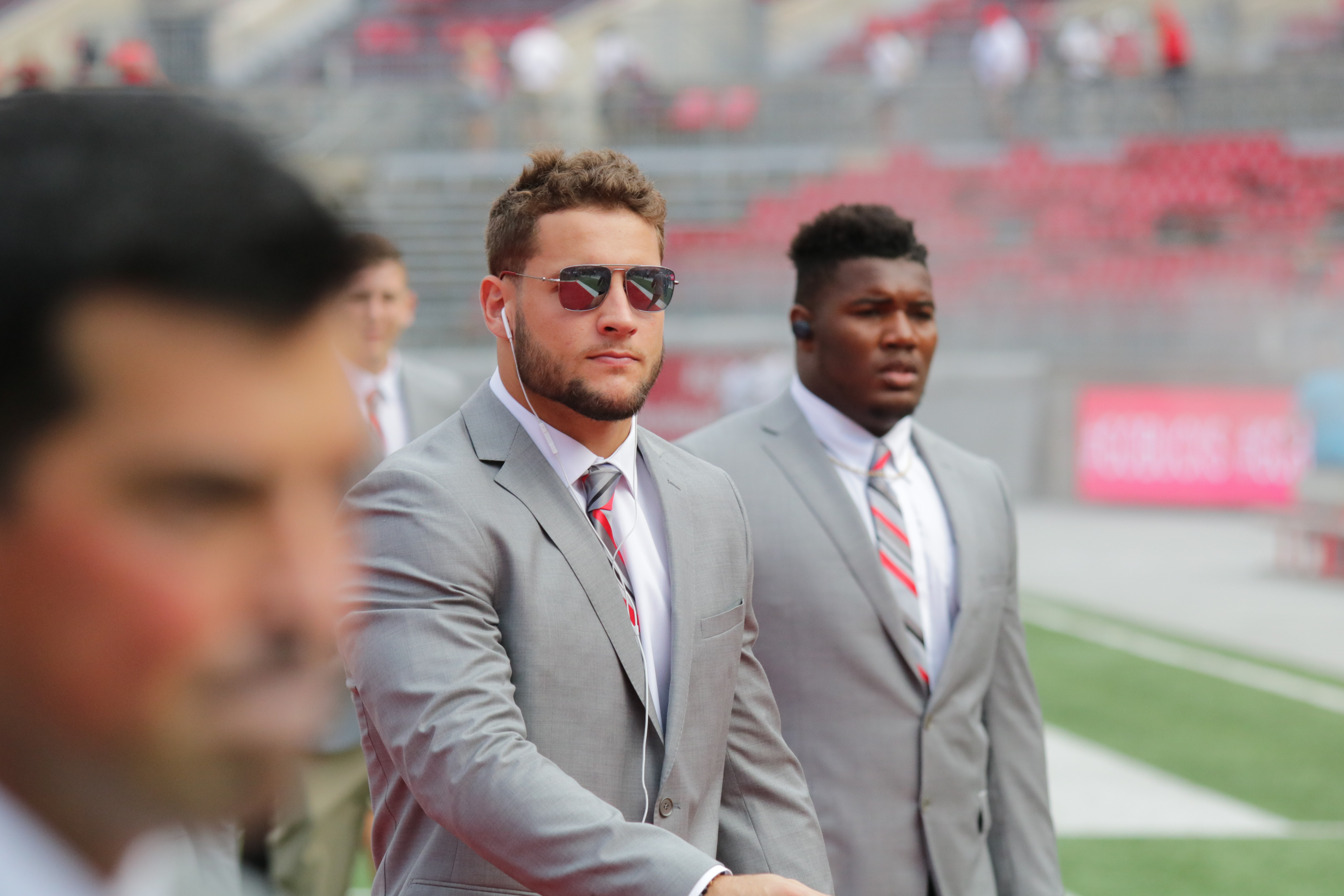 Haskins and the Buckeye offense — helped along by a huge day from Mike Weber — rolled throughout the day, while the defense struggled at times. Ohio State’s second-team offense also got some early reps, and spent most of the fourth quarter on the field, and numerous true freshmen got in the game as well.

After the win, BSB staffers Joe Dempsey, James Grega, Tim Moody and Garrett Stepien handed out Buckeye Leaves for their standout players. Here’s what they had to say:

Mike Weber did not take the field with the No. 1 offense to start the game, but the junior running back dominated Oregon State. On a first-quarter carry Weber weaved through the Beaver defense for a 16-yard touchdown, giving the Buckeyes a 14-7 lead. The 5-10, 214-pound tailback found the end zone again on a 49-yard dash, using his deceptive speed to break outside and outrun the defense. The Detroit native did not stop there, catching a three-yard touchdown on a touch pass and running in another touchdown. Weber totaled a career-high 189 yards and four touchdowns on 21 touches.

There are plenty of options on both side of the ball, but I am going to go with Mike Weber, who blistered Oregon State’s defense on Saturday. Despite not starting, Weber carried 20 times for 186 yards and three touchdowns, adding a fourth score on a touch-pass from Dwayne Haskins.

Despite rotating possessions with J.K. Dobbins, who finished with 74 yards on 15 carries, Weber was able to post a career-high in yards and touchdowns while also not playing for much of the fourth quarter. Haskins deserves an honorable mention for his 313-yard, five touchdown performance, the best passing performance of a first-time starter in school history.

He didn’t play a down in the second half, but junior defensive end Nick Bosa had already left a huge impression on the field. Bosa finished the game with four tackles, two sacks and two fumbles recovered – including one in the end zone for a touchdown. Bosa was, by far, the best player on the field for either team, and he showed once again why he’ll be a top-five pick in the NFL draft next spring.

At this stage of his career, Bosa is better than his older brother, Joey, who is already one of the best linemen in the NFL. That should be a scary thought for the rest of Ohio State’s opponents, especially considering how dominant tackle Dre’Mont Jones and end Chase Young were as well.

How overlooked is fifth-year senior wide receiver Terry McLaurin? In such a deep receivers rotation, the two-time captain and multiyear starter has been arguably Ohio State’s most underrated player on offense.

The 6-1, 205-pounder showed such glimpses against Oregon State as he hauled in four catches for 121 yards and two touchdowns. Those scores set the tone for the Buckeyes as they began both halves of the game.

On the opening drive, McLaurin made a 27-yard grab up the seam before he polished off Ohio State’s trek down the field with a two-yard score on a cross through toward the back-left corner of the end zone to put the Buckeyes in front of a 7-0 lead 3:43 into the game.

After an hour-plus weather delay at halftime, McLaurin made sure Ohio State came out strong in the second half when he turned a short strike into a 75-yard catch and run on the first play from scrimmage — 15 seconds into the third quarter — as the Buckeyes continued their onslaught.

Haskins has plenty of Buckeye Leaves coming his way as he puts on plenty of performances similar to carving up the Beavers, but McLaurin’s efforts earned my selection.