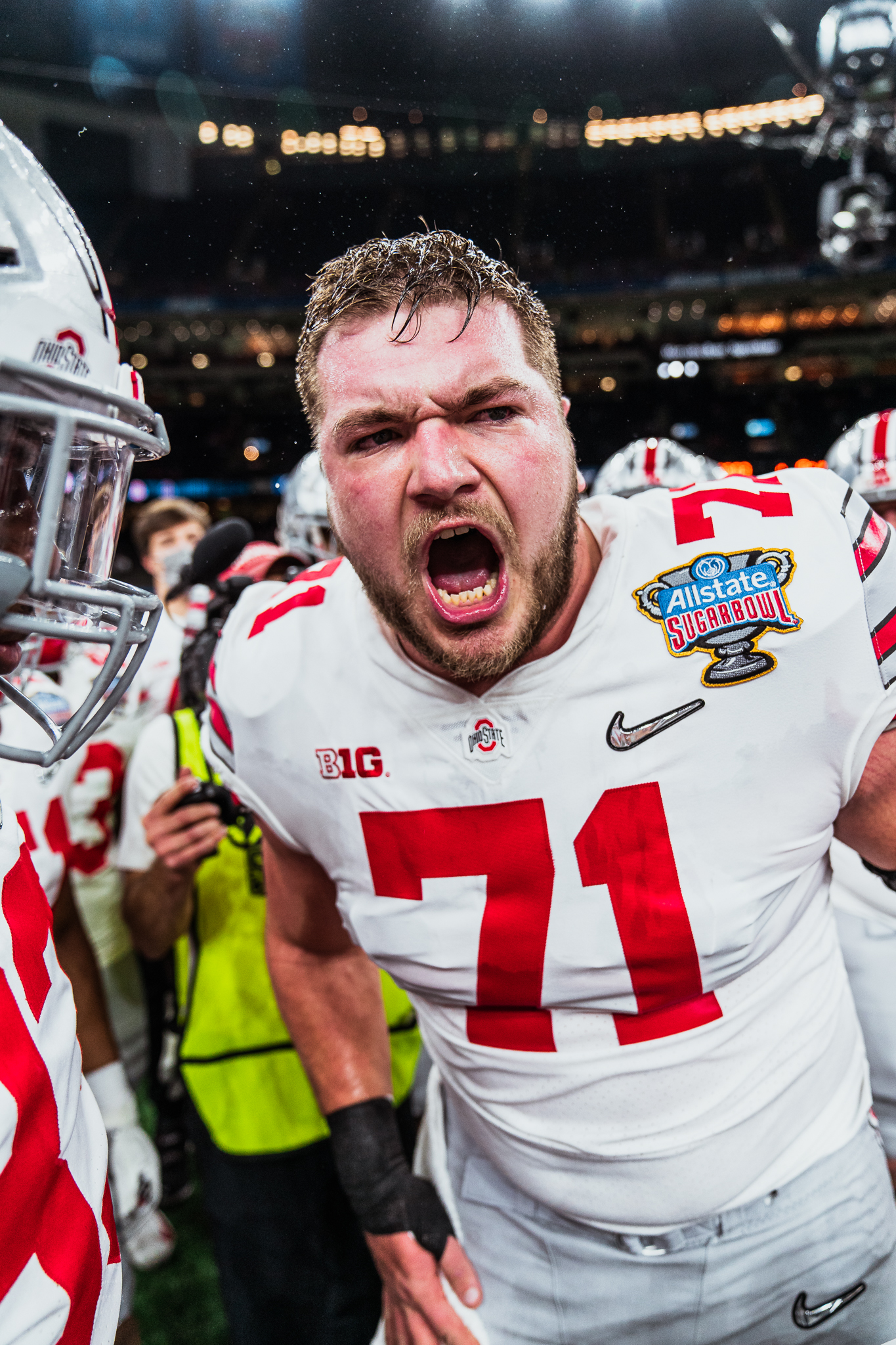 Ohio State junior quarterback Justin Fields received offensive player of the game honors, and rightfully so, and running back Trey Sermon will garner tons of attention for 254 yards from scrimmage, but the Buckeye offensive line deserves tons of credit for a dominant showing. The big men up front paved the way for Ohio State to run for 254 yards and one touchdown on 44 carries for a 5.8 yards-per-rush average. The Buckeye offensive line allowed only two sacks, giving Fields ample time to complete 22 of his 28 passes for 385 yards and six touchdowns.

Not only did Ohio State’s offensive line, along with the help of tight ends Luke Farrell and Jeremy Ruckert, open up big holes in the run game and provide Fields with a clean pocket, but it did it without typical starter Harry Miller. Third-year sophomore Matthew Jones stepped up in a huge way at left guard in Miller’s place, and the Buckeyes dominated a stout Clemson front all night.

It is difficult to cherry-pick issues with a 21-point victory by an underdog in a College Football Playoff game against a top-tier team such as Clemson, but Ohio State was not perfect. While the Buckeyes almost entirely shut down the Tigers’ vaunted rushing attack by holding them to 44 yards on 22 carries, they were susceptible to giving up plays through the air.

Clemson quarterback Trevor Lawrence completed 33 of 48 passes for 400 yards and two touchdowns against Ohio State, and while his pass volume was high, 400 passing yards is still substantial. Clemson completed some easy passes for first downs, especially in the first quarter, which will be a point of emphasis for the Buckeyes against the high-octane Alabama offense in the national title game.

Cornell Powell was able to lose All-America cornerback Shaun Wade on a few double moves that led to a big day for the Tigers’ top target, hauling in eight receptions for 139 yards and two scores in a losing effort.

In a big game like this, we’ll go with plays of the game. The most important sequence of plays for the Buckeyes came early in the game when they were trailing Clemson 7-0. Ohio State had gone three-and-out after the Tigers drove down the field on the game’s opening drive for a touchdown.

Another stalled-out drive would have given Clemson an opportunity to go up two scores, but Ohio State’s offense rose to the occasion. Fields hit junior wide receiver Chris Olave for an 11-yard gain to the Ohio State 34-yard line to open the drive. Then Fields hit Sermon on a checkdown for a 34-yard gain to the Clemson 32. The Buckeyes went back to Sermon, who gashed the Tigers for a 32-yard score to even the game at 7, sparking the 254-yard performance by the Oklahoma transfer.

Another pivotal play came at the end of the first quarter with the game tied at 14. The Tigers went three-and-out after Powell was tackled 2 yards short of the first-down marker, and on the first play of the second quarter, they punted on fourth-and-2 from their 43. Once the Buckeyes got the ball back, they scored touchdowns on three straight drives to end the first half, changing the course of the game.