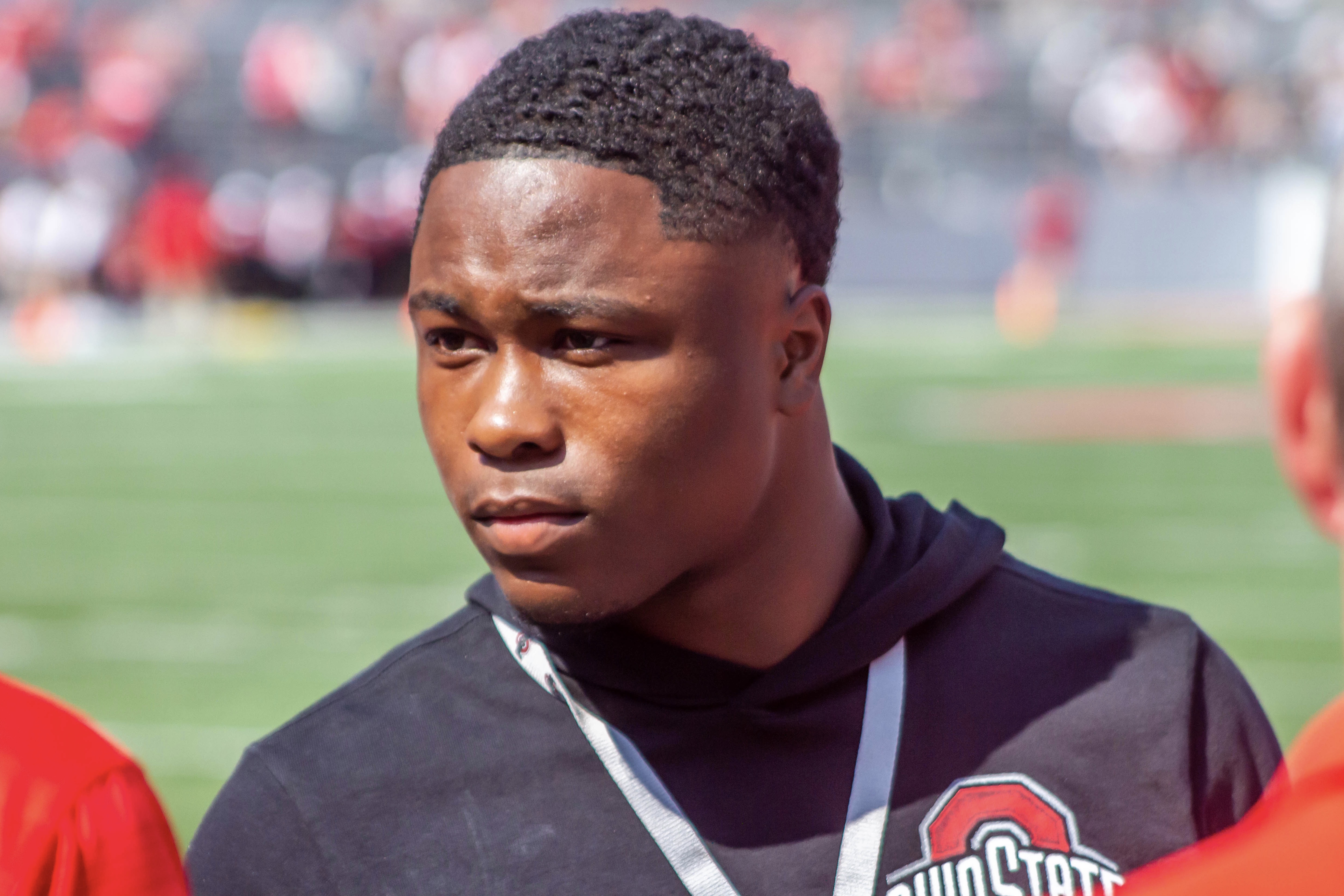 Mookie Cooper is a four-star wide receiver in Ohio State’s superb 2020 recruiting class, who plans to enroll early in January.

While fellow signees Julian Fleming, Gee Scott Jr. and Jaxon Smith-Njigba will likely spend most of their time on the outside, Cooper projects as a slot receiver.

As a junior at St. Louis Trinity Catholic, Cooper led his team to a state championship, averaging a remarkable 29.8 yards per reception, with 28 catches for 834 yards and nine touchdowns. He also carried the ball 17 times for 261 yards (15.4 yards per carry) and three touchdowns.

“Mookie Cooper out of St. Louis is a smaller guy but really stocky,” Ohio State wide receivers coach Brian Hartline said. “When he goes to block, he tries to knock you out. That’s one of the biggest things I loved about him. From speed sweeps to plays down the field, he does a lot. With him playing a little bit more running back than receiver at times, there might be a transition there. Sitting out his senior year, there will be more to find out.

“But he’s got a skill set that’s through the roof, he’s very twitched up, very quick, he’s pretty straight-line fast, too. He tracks the ball really well. He’s going to provide mismatches and I’m thrilled to be having him. He has a skill set maybe we don’t have a ton of in our room and he’ll add to that.”

Cooper, who also held offers from Alabama, Auburn, Florida, Georgia, LSU, Michigan, Oklahoma, Penn State, Texas, USC and more, only measures in at 5-foot-8 ½ and 193 pounds, but plays bigger than his size. Hartline was asked if he targeted a smaller wideout, who was similar to Purdue’s Rondale Moore or Penn State’s KJ Hamler.

“I wouldn’t say, ‘Where’s my short guy at?’ I wasn’t looking for that,” Hartline said with a smile. “His eyes are this height vs. that height? I don’t know what that changes. It’s more about your catch range. Are you explosive? Do you get off the ground? It doesn’t matter if you’re 5-11, if you can jump out of the gym, then it doesn’t matter if you were 6-4 and can’t jump. You do want guys with different skill sets. You’re looking for guys that are explosive. You’re looking for guys that culturally fit here first.

“And then maybe if you do do a speed sweep, some guys are maybe built more for that. Maybe he has a little more running back background, so it’s better for him to carry the football. And how physical is he? Is he willing to block? There’s a lot more that goes into it than just, I want to look alike. That’s not it at all. It’s just a different skill set and his return capabilities are phenomenal. It’s more of a skill set than it is height and weight and everything else, too. With that being said, if you’re going to be 5-10 in our offense, you’ve got to be able to block. So to be 170 pounds, that doesn’t usually work out right. It’s hard to be in the slot and block a walk-out ‘backer in the run game, but then also you want to catch a ‘Go’ ball. They have to marry up.

As Hartline alluded to, Cooper was forced to sit out his senior season after being ruled ineligible following his transfer from Trinity Catholic to Maryland Heights (Mo.) Pattonville. He made the move with the hope that he could enroll early in Columbus, which will be the case.

Hartline was asked about the challenge presented by missing an entire year, but the Buckeye receivers coach was not worried about Cooper missing time.

“He wasn’t injured, but you’ve had injured guys come back. If anything, he’s taken less hits on the body. He’s even fresher,” Hartline said of Cooper. “For Mook, it was hard for him because football is his life. He’s always done it since he was young. He had to change schools. There was a lot of transition there, new friends. There was a lot of communication there helping him and talking with mom and everybody, too.

“He’s a fighter, he’s tough and were there bad days? Of course. But in the end, communication was excellent and he’s a stud. He’s got a lot to learn and he’s going to continue to grow up, but he’s awesome.”

It’s clear that Hartline is thrilled to bring a dynamic playmaker like Cooper, who isn’t afraid to lower his shoulder and deliver the boom. Hartline and Day are not the only Buckeye excited to bring in the speedy and strong slot receiver.

Ohio State freshman wide receiver Jameson Williams, who has snagged six receptions for 112 yards and a 61-yard touchdown in 12 games as a true freshman, is excited to keep the St. Louis to Columbus pipeline going with Cooper.

“He’s a tough ball player,” Williams said of Cooper. “He can play ball, too. He’s from my city, we talk almost every day. I can’t wait till he gets up here, so I can play ball with my boy from St. Louis. It’s going to be fun.”