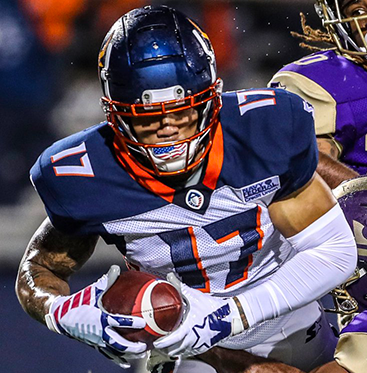 The Oakland Raiders signed former Ohio State wide receiver Jalin Marshall to a contract in early May, but then mysteriously released him just two days later. Now we know why.

According to a report from ESPN’s Field Yates, Marshall has been suspended for the first four weeks of the upcoming NFL season for violating an undisclosed league policy.

The 23-year-old Marshall — a native of Middletown, Ohio — signed with the New York Jets as an undrafted free agent in 2016. He caught 14 passes for 162 yards and two touchdowns in 10 games that season, but was suspended by the NFL the following spring for violating the league’s policy on performance enhancing substances.

Marshall was reinstated after four games, but was then waived by the Jets.

After a two-game stint with the semi-pro Dayton Hornets in 2018, Marshall signed with the Orlando Apollos of the now-defunct Alliance of American Football. He caught the first-ever touchdown in AAF history, but the league folded in April after just eight weeks of play.