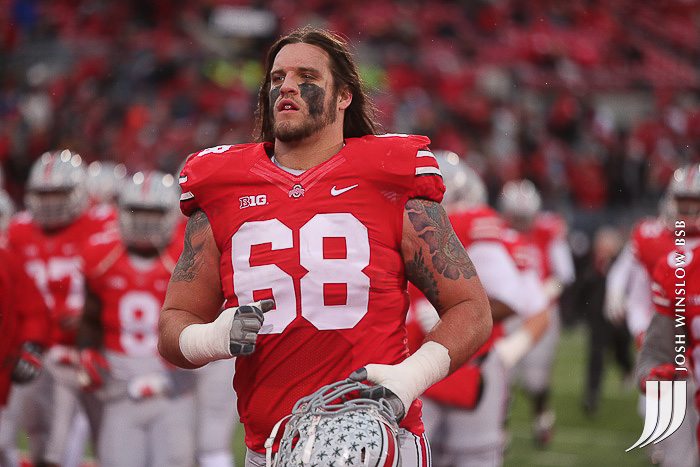 Taylor Decker and Pat Elflein became the third and fourth Ohio State offensive linemen to be named to the Big Ten All-Decade Team.

After junior guard Wyatt Davis and former Buckeye lineman Billy Price were voted onto the Big Ten All-Decade First Team, Decker and Elflein were named to the second team.

Most interesting man on the #BTNAllDecade Team?

It just might be former @OhioStateFB star and 2nd-teamer Taylor Decker (@__taylordecker). 🐅

The Big Ten is known for excellent offensive line play, and Decker was named one of the best of the decade. The Vandalia, Ohio, native was a three-year starter for the Buckeyes and won the 2015 Rimington-Pace Big Ten Offensive Lineman of the Year award.

Decker originally committed to Notre Dame because former Ohio State offensive line coach Jim Bollman chose not to recruit the No. 19 offensive tackle in the country. Once Urban Meyer became head coach, however, he made Decker a priority and the Buckeyes flipped the four-star prospect to Ohio State.

After playing in all 12 games as a reserve his freshman season, Decker earned the starting job at right tackle as a sophomore. The 6-foot-8, 315-pound bruiser moved to left tackle ahead of his junior campaign and blossomed into a force to earn second-team All-Big Ten accolades.

At left tackle as a junior, Decker helped lead the Scarlet and Gray to a Big Ten title, a spot in the inaugural College Football Playoff and a victory in the national championship victory.

After becoming a national champion in his third season, Decker could have left early for the NFL, but he returned to improve his draft stock. As a senior, he helped guide the nation’s No. 3 scoring offense, which finished No. 11 in rushing and No. 4  in total offense. Decker earned consensus first-team All-American and first-team All-Big Ten honors in 2015.

After becoming the No. 16 overall pick in the 2016 NFL Draft by the Lions, Decker quickly ascended the depth chart to become a first-year starter in Detroit. He earned a spot on the Football Writers Association All-Rookie team for his performance.

Another Ohio native who went on to become a national champion at Ohio State was Elflein, who also earned a spot on the Big Ten All-Decade Second Team.

We have an addition: #BTNAllDecade 2nd Team.

Like Decker, Elflein was originally overlooked by the Buckeyes as a recruit. The three-star prospect from Pickerington, Ohio, did not even hold an Ohio State offer until Luke FIckell became head coach.

Elflein took a redshirt as a freshman due to a foot injury and spent most of his redshirt freshman season as a backup. However, when Marcus Hall was ejected against Michigan, Elflein filled in for three quarters and helped lead Ohio State to victory. His performance earned him the start in the Big Ten Championship Game, and the rest is history for the Pickerington North product.

Helping pave the way for Ezekiel Elliott and the 2014 Buckeyes on the way to a national title, Elflein earned first-team All-Big Ten honors as a third-year sophomore.

As a junior, Elflein was named a captain and became a second-team All-American. He also earned a spot on the

As he continued to dominate on the offensive line, more recognition came Elflein’s way. As a junior, he was once again on the first-team All-Big Ten First Team, helping the Buckeyes lead the conference with 245.2 rushing yards per game.

In his second season as a captain, Elflein transitioned from guard to center and performed like one of the best in the country. He won the 2016 Rimington-Pace Big Ten Offensive Lineman of the Year honor and the Rimington Award as the nation’s best center, in addition to being a consensus first-team All-American.

Following his decorated career in Columbus, Elflein went to Vikings when they selected him early in the third round (No. 70 overall) in the 2017 NFL Draft. Elflein earned a spot on the PFWA All-Rookie Team in his first year in Minnesota and has been a staple on the team’s offensive line since day one.