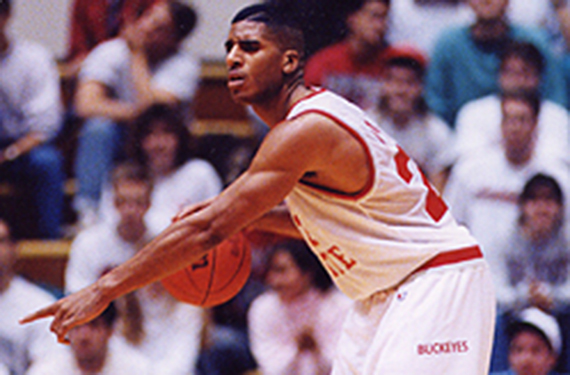 Jim Jackson, Ohio State’s seventh all-time leading scorer, was selected to be inducted into the National Collegiate Basketball Hall of Fame Class of 2021.

The National Collegiate Basketball Hall of Fame is located inside The College Basketball Experience (CBE), which is a world-class experiential entertainment facility adjacent to Kansas City’s T-Mobile Center. Jackson’s Class of 2021 will be induction class No. 16 in the Hall of Fame’s history.

A Toledo, Ohio native, Jackson attended Macomber High School and won a state championship as a senior while earning McDonald’s All-American honors. As a freshman at Ohio State in 1989-90, Jackson led the Buckeyes to the NCAA Tournament after a two-year absence, averaging 16.1 points, 5.5 boards, and 3.7 assists per game.

As a sophomore, Jackson helped  Ohio State earn a No. 1 seed in the Midwest Region after winning a share of the Big Ten regular-season title in 1990-91. Jackson averaged 18.9 points, 5.5 rebounds and 4.3 assists per game to earn consensus All-American honors.

Taking his game to the next level, Jackson was named UPI National Player of the Year after averaging 22.4 points, 6.8 rebounds and 4.0 assists per game and leading the Buckeyes to another Big Ten title and the Elite Eight of the NCAA Tournament.