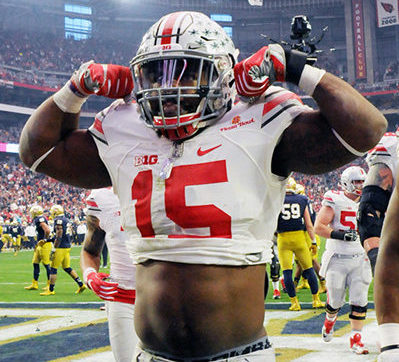 It's official, former @OhioStateFB star RB @EzekielElliott is a member of the #BTNAllDecade 2nd Team.

A former four-star prospect from St. Louis John Burroughs, Elliott rushed for 3,961 yards and 43 touchdowns in his three-year career with the Buckeyes. That includes 696 yards and eight scores in three straight wins over Wisconsin in the Big Ten championship, Alabama in the Sugar Bowl and Oregon in the inaugural College Football Playoff national championship.

Shazier also came to Ohio State as a four-star prospect from Plantation, Fla. He finished his college career with 317 tackles, 15 sacks, 4 pass break ups and one interception, which he returned for a touchdown in a 2012 win at Penn State. He was then named an All-American following his junior year, during which he recorded a Big Ten-leading 143 tackles, including a school-record 16 solo tackles in his final game in Ohio Stadium.

A first-round selection (No. 15 overall) of the Pittsburgh Steelers in the 2014 NFL Draft, Shazier was a two-time Pro Bowler (2016-17). He unfortunately suffered a career-ending spinal injury during a Monday Night Football game against the Cincinnati Bengals in 2017 and was given a 20 percent chance of walking again. Despite those odds, he was able to dance at his wedding just 17 months after the injury.