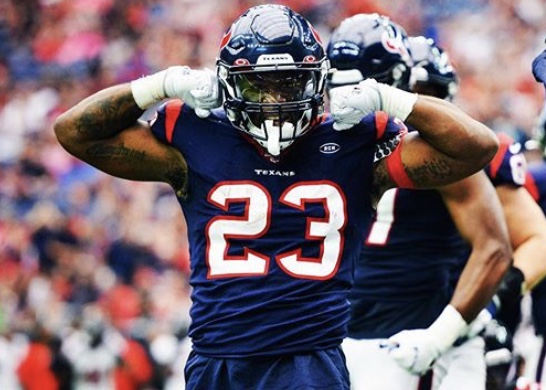 Former Ohio State running back Carlos Hyde has reportedly agreed to a one-year, $4 million contract with the Seattle Seahawks.

Terms of the deal were first reported by NFL Network’s Ian Rapoport and Tom Pelissero.

Hyde, who rushed for 3,198 yards and 37 touchdowns in his four-year career with the Buckeyes (2010-13), was selected by the San Francisco 49ers in the second round (No. 57 overall) of the 2014 NFL Draft. He played four seasons with the 49ers before signing a three-year deal with the Cleveland Browns in 2018.

Despite being the Browns’ leading rusher at the time, Hyde was unexpectedly traded to the Jacksonville Jaguars after just five games. He was released after the season, at which time he signed a one-year, $2.8 million deal with the Kansas City Chiefs.

Hyde was traded to the Houston Texans during the preseason, then proceeded to rush for a career-best 1,070 yards and six touchdowns in 245 carries in place of injured starter Lamar Miller. He played most of the season with a torn labrum, and underwent surgery in February to repair the ailment.

Now fully healthy, Hyde joins a crowded backfield that includes presumed starter Chris Carson, backup Rashaad Penny, second-year pro Travis Homer and fourth-round pick DeeJay Dallas. Both Carson (hip) and Penny (ACL) are recovering from late-season injuries, with the latter expected to begin the season on the physically unable to perform list, which should open the door for Hyde to see the field in early-down situations.