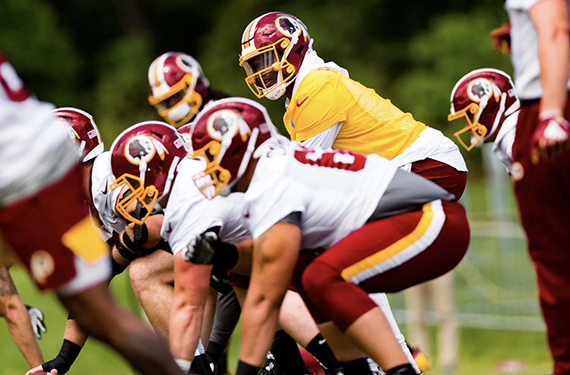 It will not be Dwayne Haskins, but Colt McCoy instead.

McCoy was the quarterback Gruden wanted all along, indicated by his wording during the press conference.

“Yeah I decided a long time ago, we’re starting Colt and we’ll go from there,” Gruden said.

While Washington used its No. 15 pick in the 2019 NFL Draft on Haskins, Gruden’s decision does not come as much of a surprise given the coach’s affection for McCoy.

McCoy has been the Redskins’ backup for most of five and a half years that Gruden has been at the helm. He knows the offense and understands what Gruden is looking for, having served as backup to Kirk Cousins and Alex Smith in the past.

The 2018 starter, Smith, broke his leg in November, but McCoy only lasted for parts of three games until he, too, went down with a broken leg in a Dec. 3 loss at Philadelphia. His leg was supposed to have healed by the time the team started offseason workouts but surgery complications led to three more surgeries last winter, sidelining McCoy until training camp.

After his return, McCoy all but won the starting job in the first two weeks of camp, before lingering pain in his surgically repaired leg forced him to miss the next eight weeks.

Indicating the job may have always been McCoy’s if healthy, Gruden said, “Well, it’s his job to lose for sure.”

Gruden named NFL veteran Case Keenum the starter over Haskins, who only started one year at Ohio State, where he threw 50 touchdown passes as a sophomore.

While Keenum threw for 970 yards in four-plus games, he missed several open touchdowns that could have altered the course of at least three of the four Redskins’ losses. He sprained his foot in a Sept. 23 loss to Chicago and missed practices afterward.

Gruden replaced Keenum with Haskins in the second quarter of Washington’s 24-3 loss to the Giants on Sept. 29. After Haskins threw three picks, Gruden announced a rare three-man competition for the starting job, knowing McCoy would be able to participate in full practices.

Although Gruden said the three signal callers would compete, he hinted that he had already made up his mind. He made numerous references to wanting to see how McCoy came out of each practice and the selection of McCoy seemed likely, especially considering McCoy’s familiarity with Gruden’s offense.

“It means a lot,” Gruden said when asked how much McCoy’s knowledge of the team’s system played in the Oct. 4 decision. “Any coach will tell you that. It’s very important for a quarterback to know your system; otherwise you have to change your system. … I think all three of the quarterbacks know the system, but Colt has the most experience in it. He’s very comfortable with it. But we’ll see. This will be a great test for him; he hasn’t faced a live rush since Philadelphia last year. I think that will be the biggest test for him.”

With Washington sitting at 0-4 and a matchup with the Super Bowl champions looming, McCoy is the quarterback Gruden trusts the most.

In college, McCoy was a four-year starter at Texas and took on Ohio State twice during his standout career. As a freshman in 2006, McCoy completed 19 of 32 passes (59.4 percent) for 154 yards and one touchdown with one interception in a 24-7 loss to the Buckeyes.

McCoy would get an opportunity for revenge against the Scarlet and Grey in the Fiesta Bowl as a junior. The Longhorn gunslinger led his team to a 24-21 victory on 41-of-58 passing (70.7 percent) for 414 yards and two scores with one pick and one rushing touchdown.