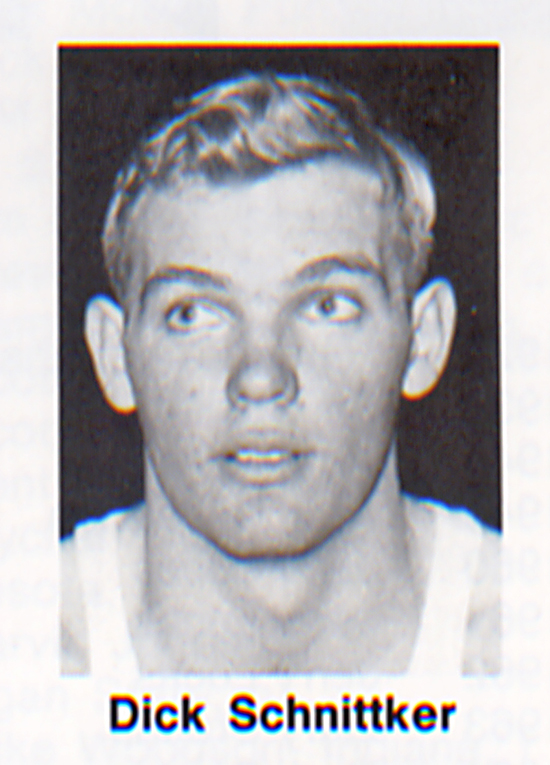 Schnittker, who was born in Kelleys Island, Ohio, on May 27, 1928, averaged 17.9 points per game in his collegiate career. The 6-foot-5 forward was a two-time all-Big Ten performer and two-time, including his consensus selection as a senior in 1950.

The Buckeyes finished 22-4 during Schnittker’s senior season, winning the Big Ten title and qualifying for the eight-team NCAA Tournament. Ohio State lost in the first round to eventual champion City College of New York.

In his one season on the squad, Schnittker helped the Buckeyes win a Big Ten championship and Rose Bowl victory over California.

Schnittker was the No. 4 overall pick in the 1950 NBA Draft and began his professional career with the Washington Capitols before leaving the team to join the U.S. Army to serve in the Korean War.

Two years later, Schnittker returned to the NBA to play for the Minneapolis Lakers, where he won two championships and made league history.

The former Buckeye standout became the first player to play in the Finals after not playing a game during the preceding regular season. He was later joined by Tom Hoover (1966) and Tracy McGrady (2013), who both accomplished the same feat.

The Kelleys Island, Ohio, native averaged 8.3 points per game across six seasons, winning his championships in 1953 and 1954 with the Lakers.

Schnittker is survived by his wife, Barbara; a son, Richard Jr.; and three grandchildren.