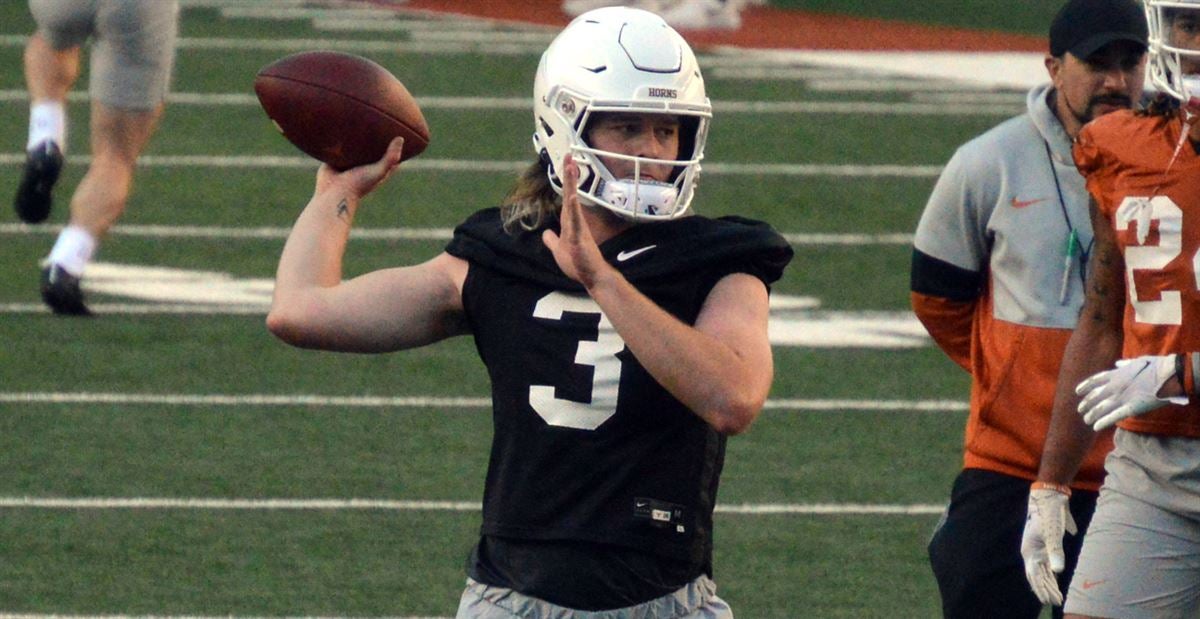 Former Ohio State quarterback Quinn Ewers spoke with Texas football beat reporters on Thursday to discuss the Longhorns’ Orange and White Game next weekend. It was the first time Ewers has spoken with the media since he joined the program in January.

The Southlake (Texas) Carroll Senior High School five-star initially committed to Texas on Aug. 14, 2020, but later decommitted and announced his intentions to play for the Buckeyes on Nov. 19, 2020. He would have been the first quarterback since former Longhorn Vince Young to receive a perfect 1.000 rating in the 247Sports composite ranking. At the same time, he became the highest-rated recruit in Ohio State history.

On Aug. 2, 2021, Ewers reclassified to the class of 2021 and enrolled a year early at Ohio State. He made his collegiate debut against Michigan State last season, taking two snaps and handing the ball off twice. On Dec. 3, 2021 — four months after he arrived in Columbus — Ewers entered the transfer portal and decided to continue his athletic career at Texas.

When asked about his decision to transfer to Texas, Ewers said he wanted to return closer to home and play for the team he always rooted for as a child.

“I grew up always watching the Longhorns play, wanted to be in that burnt orange,” Ewers said. “There was a little obstacle in between, but I ended up here, and I’m very thankful for all the opportunities God has given me. I’m just excited to be back in the home state.”

Ewers also mentioned his proximity to his friends and family in Southlake as a significant factor in transferring to Texas. He appreciates the time spent at Ohio State. He thinks his experience with head coach Ryan Day, assistant coach Corey Dennis and quarterback C.J. Stroud will help him develop into a more well-rounded signal-caller.

“C.J. is a great player and a great human being,” Ewers said. “We have a good relationship. I’m super pumped for what he has in store for the rest of his career.”

Ewers will compete with Hudson Card for Texas’ starting quarterback position. Card is a former four-star prospect and No. 2 dual-threat quarterback from Austin (Texas) Lake Travis High School. He started the Longhorns’ first game against Louisiana, completing 14 of 21 passes for 224 yards and two touchdowns. Card lost his starting job to Casey Thompson after a Week 2 loss to Arkansas.

Despite Card’s familiarity with Texas head coach Steve Sarkisian’s offensive scheme and system, Ewers believes he can win the quarterback competition and represent the Longhorns as QB1 and feels like he’s right where he belongs in Austin, Texas.

“I feel like I kind of committed more emotionally. But at the end of the day, I ended up where I think I should be, and that’s all there is to it,” Ewers said. “It’s all in the past. I try not to focus on all that. I try to just keep tunnel vision and focus on what’s ahead.”

Ewers’ departure left Ohio State with just three scholarship quarterbacks this year. Still, Day thinks the positional room is as strong as it’s been entering his fourth season as head coach with Stroud, sophomore Kyle McCord and freshman Devin Brown in the mix.

“I feel really good about where we’re at in that room right now,” Day said Thursday. “The guys have the right mentality. They’re developing and they’re getting better every day. Their focus is not on how quickly I can get on the field — Kyle and Devin — it’s more about how I develop to get better so that when I do get on the field, I’m ready to go. But it is good to know that Kyle’s had some experience, and now it’s good to get Devin in here midyear and not in the summer because he’s got 15 practices under his belt.”