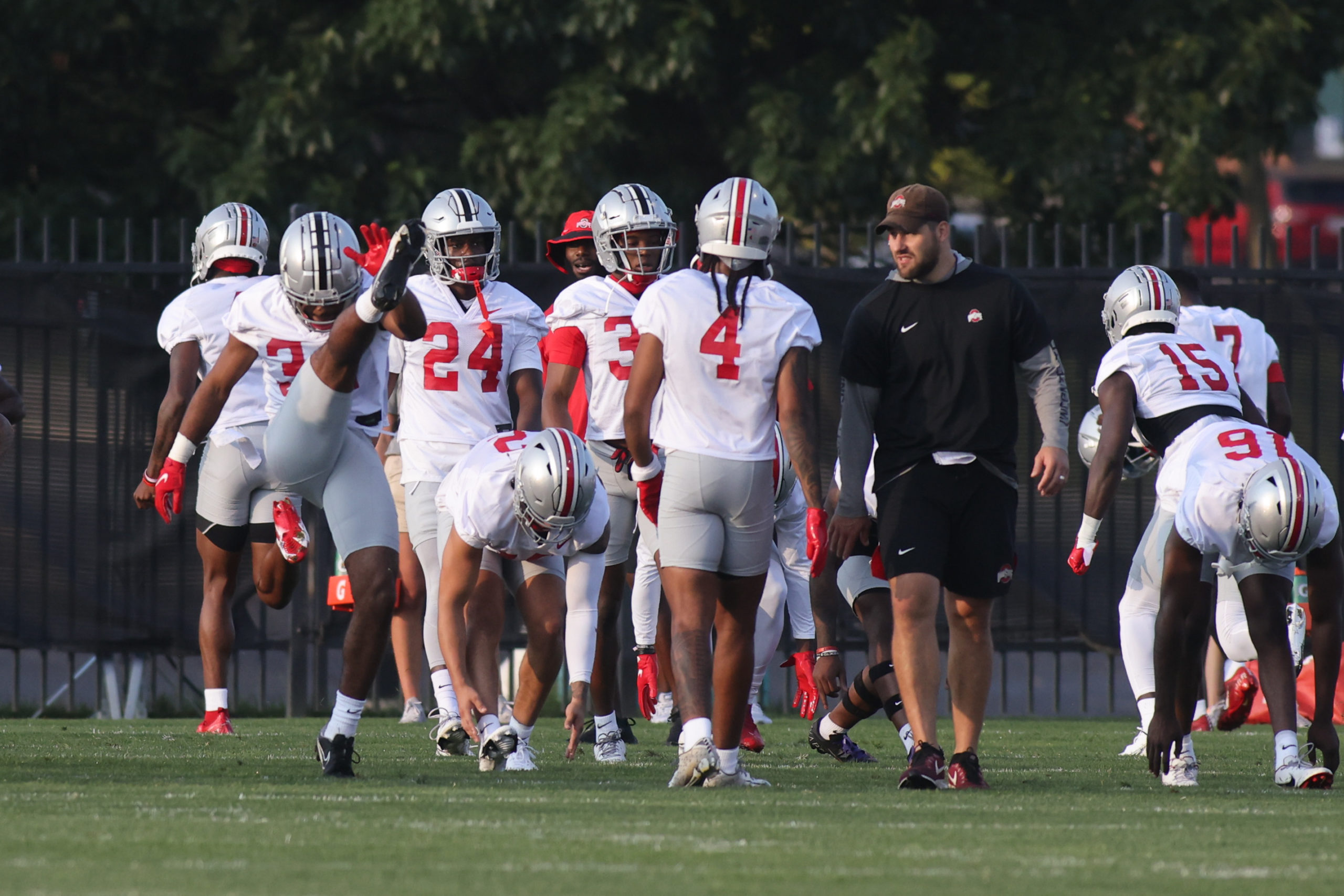 With Ohio State opening fall camp on Wednesday, and welcoming reporters back into the Woody Hayes Athletic Center to talk to coaches for the first time since early 2020, Buckeye Sports Bulletin is jumping back into the preview game with position-by-position looks at the team ahead of media availability with the respective position coaches. Today, defensive coordinator Kerry Coombs and several CBs will take center stage.

Ohio State has alluded to a shift into the 4-2-5 as its base defense for years now. Greg Mattison proposed it alongside his bullet position, essentially a hybrid linebacker/safety that could help the Buckeyes and coverage and move around outside of the box while contributing against the run when needed. Lots of teams deploy a position like that and it seems that Ohio State wants to do the same, running with a bullet on every defensive snap of the spring game, using either Craig Young or Ronnie Hickman in that role.

However, we’ve heard that before from these Buckeyes. The 4-3 has remained Ohio State’s staple despite staff changes, and while OSU certainly looks more willing to expand after its embarrassing showing defensively in the national title game, progress comes slowly in Columbus. It seems safe to expect that there will be at least some 4-2-5 for the silver bullets this season, but it seems that the Buckeyes are still looking to balance that with more traditional looks.

“Now, it’s about finding that mix of nickel, safety, what is that all gonna look like? That’s something that we’re excited to find out,” head coach Ryan Day said in the spring. “We don’t really have the answers to that yet.”

Does an impressive fall camp from Hickman or Young change that? Does Ohio State even have three linebackers that it can justify playing?

No. 2: Is there a youth movement incoming in Columbus?

Although quite a bit of the blame for that 2020 defense can fall on the schematics, the scheme does still require execution, and Ohio State’s secondary frequently seemed to lack in that department. With just Shaun Wade off to the NFL from that group, Ohio State can trot out a moderately more experienced secondary this season, but if it actually should is a different story.

Of those experienced players in the back four (or five), one, Sevyn Banks, wasn’t exactly impressive as the No. 2 cornerback next season. He seems to be penciled into the top spot regardless, but there are quite a few openings behind him. The most obvious is in Marcus Williamson’s slot corner spot. After a tough showing in the 2020 regular season, Williamson seemed to lose his starting job to then-freshman Lathan Ransom in the playoff, who impressed against Clemson in that role.

“He’s just continued to improve every day,” Coombs said after Ransom’s performance against Clemson. “I think we all felt like he was doing a really good job in practice. But as you know, that’s different than the game. So he showed up and played big when we needed him to, and he continues to improve and develop, and we’re excited about his future.”

With that success, many were expecting a full jump into the starting lineup for the Arizona native. However, at practice No. 1, it was Williamson rolling with the ones, while risers like Ransom, and redshirt freshmen Lejond Cavazos and Ryan Watts worked with the reserves. If Ohio State is planning on something resembling a youth movement in 2021, that first practice did very little to give it away.

No. 3: Is a healthy Cam Brown enough to take over across from Sevyn Banks?

There are few injuries harder to return from as an athlete than an Achilles tear. An ACL tear can impact lateral movement, sure, and quite a bit more damage can be done in the long-term from a concussion or other head injuries, but Ohio State has seen first-hand the effects of a torn Achilles on speed and burst for an athlete. Linebacker Tuf Borland tore his in 2018 and never looked like the same player again. Running back Master Teague suffered a similar injury and couldn’t break away at all in 2020.

Cornerback Cam Brown is the latest Buckeye hit with the injury, seeing his season ended against Penn State last year, but early indications say that Ohio State is confident in his ability to return, and even to contribute as a starter. He was full-go at that first practice, Day said that he, along with Kourt Williams, are full participants this fall, and Brown was almost exclusively lining up across from Banks at cornerback as Ohio State’s top No. 2 cornerback.

When healthy, Brown was a solid contributor. Can a post-injury version of the Missouri native reach those same levels, especially when his responsibilities are increasing after Wade’s departure?

Ohio State has quite the recent history of No. 1 cornerbacks, going back to the start of the Urban Meyer. From Bradley Roby through Wade, there are very few misses at the top spot, and the players who didn’t quite hit expectations rarely stick around in that spot for very long. However, in two of the last three seasons, Ohio State really seemed to struggle at the position, trotting out an under-coached Kendall Sheffield in 2018 and an overpowered Wade in 2020, bisected by an excellent season from Jeff Okudah.

With Wade gone, Ohio State is looking for its fourth No. 1 cornerback in as many seasons and seems to have settled on Banks as the answer. The No. 2 in 2020, Banks has generated plenty of hype this offseason and is drawing quite a few preseason All-Conference nods, but the play on the field has yet to match the expectations off of it.

Ohio State will need a fully operational Banks to improve defensively, and that just hasn’t been the case thus far in his career. However, he wouldn’t be the first Buckeye to make a big leap the offseason before his jump into the top spot and could be in for big honors if he can follow the path blazed by Okudah, Denzel Ward and Marshon Lattimore, among quite a few others.

Although defensive coordinator Kerry Coombs has long been known as a man coverage disciple, back to his first tenure in Columbus, the 2020 Buckeyes strayed from that. There was plenty of man in the defense, sure, but Ohio State leaned heavily on cover 3 looks that its defenders didn’t quite seem to understand, too. Coombs has alluded to that decision being personnel-based and has spent much of this offseason indicating that a shift into more man looks is incoming.

“We’re gonna hang our hat on it. Our first pitch, if we’re standing on the mound, we’re throwing man-to-man. We gotta be able to play it. That’s our fastball. Everything else bleeds off of that. How much three-deep, how much split-safety, how much of anything else we play has to bleed off our ability to play man-to-man. We have to be able to do that. If we can’t, then we have to change what we do. But I think we have the guys who can do it, and I like our chances.”

However, the personnel hasn’t changed a whole lot since last season. Perhaps an improved Watts or a big jump from one of the freshmen is incoming, but if the core is as it was last season, save for Wade, it’s hard to see the circumstances that inspired the zone coverage changing a whole lot as Ohio State enters the season.