Film Study: This Is The Buckeye Line We Expected 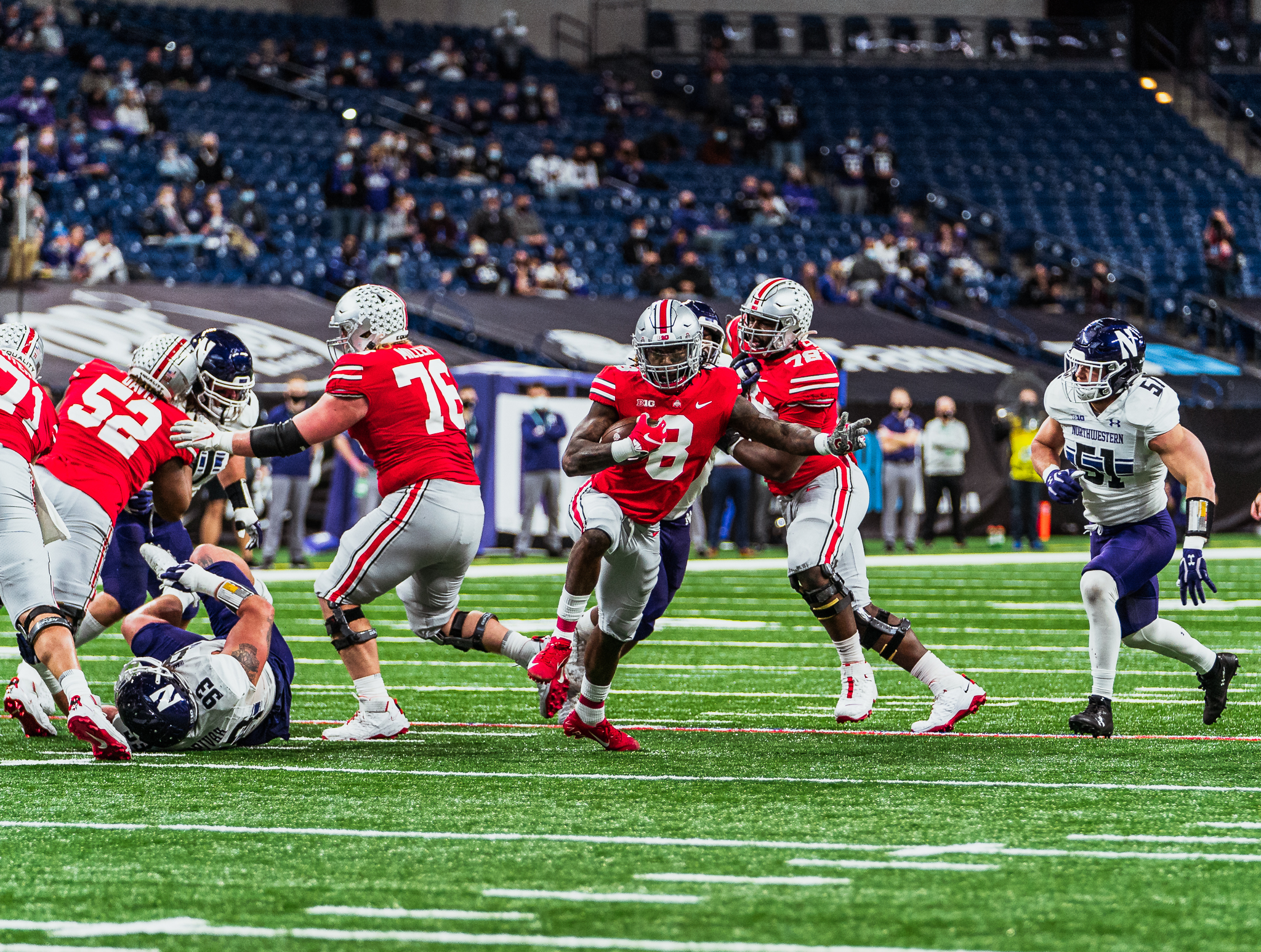 For good reason, the story of Ohio State’s 22-10 victory over Northwestern on Dec. 19 has been halfback Trey Sermon, who rushed for a country mile to rescue the Buckeyes from a very shaky start against a great Northwestern defense.

Sermon was outstanding, running with more confidence and athletic prowess than he showed through any of Ohio State’s first five games. He looked like the running back that some hoped he could be in Columbus, combining solid speed and footwork with a zest for contact and the kind of build that Ohio State hasn’t seen from a halfback since Ezekiel Elliott.

That’s a pretty appealing archetype to plop behind what certainly looked – on paper – to be the best offensive line in school history. If Kevin Wilson could continue to dial up strong zone scheme looks with Wyatt Davis, Josh Myers and Thayer Munford leading the way, Sermon would fit perfectly as a balanced back with good size and vision that could find and attack the holes that the line opened.

Obviously, that was the best case scenario. That’s not what Ohio State delivered in those first five games. While there were certainly patches and flashes of greatness, this was, for the most part, a disjointed rushing attack that appeared to be seriously limited by the lack of an elite talent at halfback.

Against Northwestern, Ohio State’s offensive line and rushing attack delivered the kind of performance that would certainly hue closer to that best case scenario, even despite some shaky (at times) play calling from Ryan Day.

While Sermon was – again, deservedly – the story of the day, the defining thing from this game is the offensive line play. The rushing attack wasn’t especially complex in design, this was just a case of elite execution from elite talent up front.

Ohio State has down blocks across the board up front, with Luke Farrell getting outside of the play side defensive end so that Ohio State can isolate him with a quarterback keeper fake, while springing Farrell into the second level to take on a linebacker. The isolated end gives Ohio State even numbers, because that five-man line (with a tight end on the other side), Farrell and Garrett Wilson are now matched up with three defensive linemen, three linebackers and an aggressive safety.

The reach blocks do well to seal off the defensive line and the outermost linebacker, with enough of a push for Munford to move into the second level and take out the inside linebacker. Farrell distracts that safety for long enough to help spring Sermon, and Wilson takes on a third-level defender to create an even bigger gain. Sermon shows off surprising speed to take advantage of the great blocking for a big gain.

Similar idea here, this time in a slice concept, similar to split zone with that tight end darting behind the line after the snap to pick up the unblocked defensive end. Sermon is headed for the B gap, with the line again washing the defensive front away from the intended direction of the run (because when you can just do that, it makes things much easier). Once he hits that B gap, it’s just about reading the blockers in front of him and finding the second-level space.

Here, with the inside completely sealed off again, and Farrell looking to push that defensive end inside as well, Sermon is patient, waits for Farrell to complete his block, and then pops outside into green grass. It’s a good read from Sermon, a great block from Farrell, and an extremely difficult play to defend when run this well.

Here’s Farrell making noise again, later in that drive. Farrell is coming across the line again, this time as an insert into the B gap so that Harry Miller can release to the second level to seal off the play side linebacker, with the back side linebacker distracted by a Justin Fields rollout fake.

Farrell should be coming in to help Munford with the defensive tackle but Munford absolutely eats him up, so Farrell just cracks the defensive end to solidify that outside lane, while Miller takes up that linebacker and frees up Sermon for an easy score. It goes without saying, but a tight end that can do this is very rare! Ohio State should appreciate it!

While the line is certainly deserving of recognition here, Sermon is still worth noting as a pretty significant factor in what happened on Saturday, and this is a great play to appreciate him through. The blocking is solid off of a pretty neat counter look, with Sermon finding space in the B gap (well hey, there it is again), but this significant gain doesn’t happen without Sermon making a play on his own. He cuts up field as quickly as he can and delivers a swift stiff arm to one of the best linebackers in the country in Paddy Fisher.

This is what Sermon can be. When he has the time and space from his line to make plays like this, he’s a tremendously dangerous playmaker in an offense that certainly seems to suit his skill set. Ohio State’s chances against Clemson don’t look especially encouraging for the Buckeyes right now, but this level of play from Sermon and this offensive line could be the key to overcoming that. He just has to maintain this level of play, which, well, that’s easier said than done.