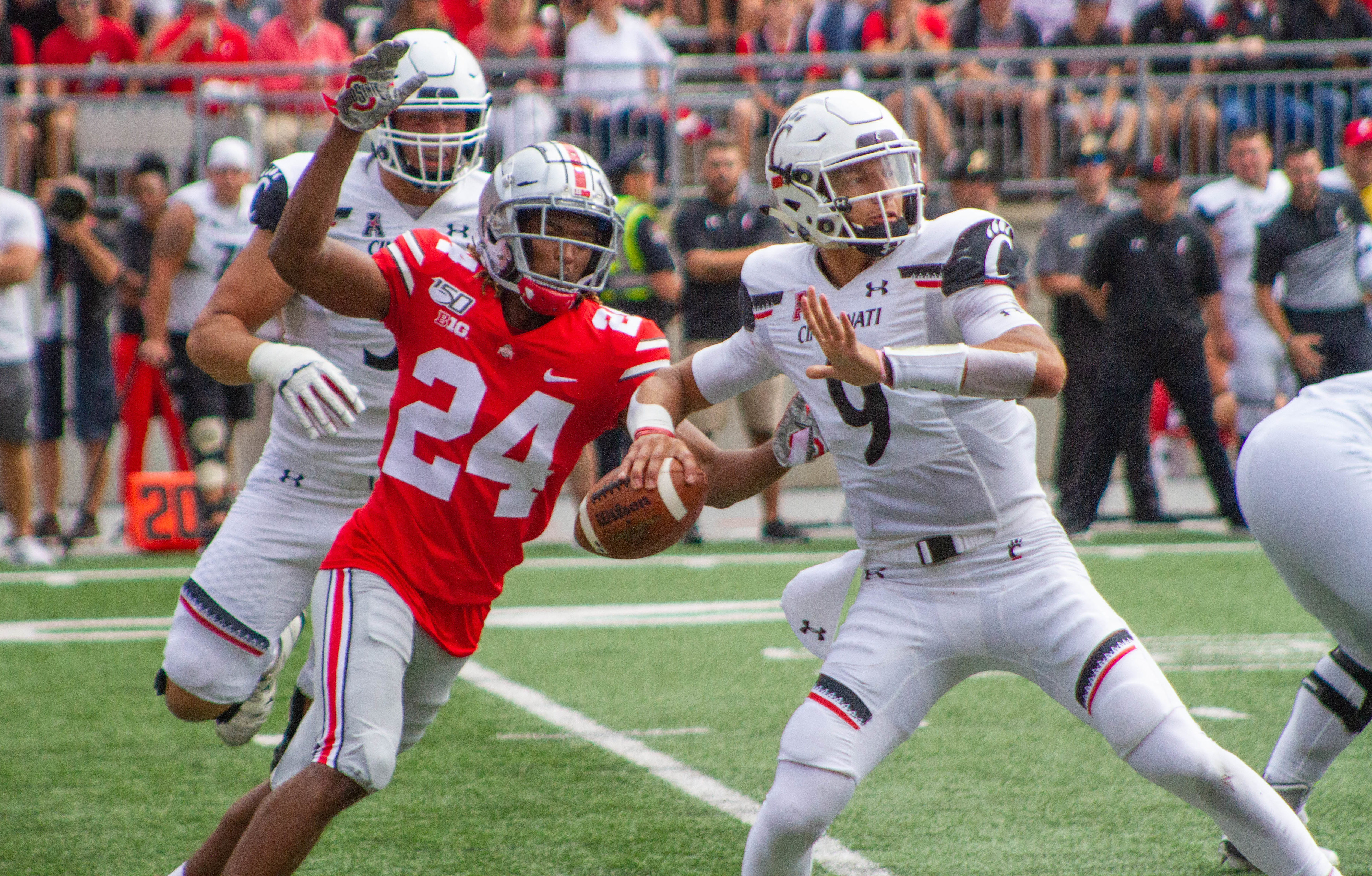 Through six games at Ohio State, Jeff Hafley and Greg Mattison have delivered exactly what they said they would: simplicity, speed and the kind of defense that Ohio State had become accustomed to prior to a disappointing campaign in 2018. The stats back that up. Ohio State is a top five defense in essentially every major category. It does not allow big plays, rarely allows points, and creates turnovers and sacks at a rate higher than almost any other defense in America.

While the stats alone showcase the turnaround job Hafley and Mattison have done, their promises of easy to understand schemes, allowing players to move faster and more confidently show up even more on film. Ohio State isn’t running a basic defense, nor is it fair to call the schemes simple, but things are not complex for players right now. The reads are done pre-play, and the plays are designed to put players in position to react to the play with their athletic ability. A new Cover 3 look has revolutionized the way Ohio State’s back seven plays, opening up the field for players who previously struggled to showcase their ability in a far less restrictive and frigid system. That same look has created more time for the dominant front four to pester opposing quarterbacks.

Again, this all sounds simple. That’s the point. Hafley and Mattison set out to create a defense, as mentioned, that makes things easy for the players, without dumbing down the actual concepts and making the defense easily read. Ohio State is running a lot of Cover 3, but it isn’t doing it in traditional ways. The Buckeyes are throwing unique pre-play alignments, and unique personnel groupings at offenses to disguise play calls. They’re using misdirection in the same way that Ryan Day does with the offense to create openings and mismatches without actually leaving the back seven susceptible to big plays.

Nowhere is that more apparent in the way Ohio State is generating pressure on the quarterback. When the Buckeyes aren’t using a straight rush from their excellent line, while dropping seven into coverage, they’re using one of two looks. The first is a regular fire blitz, usually from a middle linebacker, which just means five rushers instead of four, and a base Cover 3 in the backfield, with three intermediate zones instead of four.

The second is far more interesting, far more creative and to this point, far more effective than anything else the Buckeyes are doing defensively. They’re called creeper blitzes, and as the season goes on, they’re becoming a staple for the Silver Bullets.

Ohio State’s version of the creeper blitz has two primary designs and a fourth serving as a counter, all dependent on personnel and the blitzing player. The design that the Buckeyes use most frequently is what we’ll refer to as the base creeper blitz. Run out of a 4-3, the base look drops the outside linebacker, usually Pete Werner or Brendon White, into the deep middle third of the secondary. Both outside cornerbacks drop into their deep thirds, creating a Cover 3 look.

Underneath, the defensive end, usually Chase Young, drops into the zone vacated by the linebacker, next to two real linebackers playing intermediate zones. The true safety, usually Jordan Fuller, rushes up to fill the fourth intermediate zone, because the nickel, usually Shaun Wade, is blitzing off the edge.

The purpose of the play is to simulate a blitz without actually sacrificing the personnel advantage down the field, which is why creeper blitzes are also commonly referred to as simulated blitzes. Bringing a rusher from a non-traditional spot can confuse offensive lines and quarterbacks, and create openings for that blitzer to make a play uninhibited by any blockers. That was the case here, because Wade flew into the backfield unblocked and forced Adrian Martinez to throw before he was ready.

The second primary design is essentially the same from a personnel perspective, but the blitz comes from a different spot. It’s run out of 4-3, just like the base look, but instead of rushing the nickel back, Ohio State will bring one of its two remaining linebackers on a rush inside of the rushing defensive tackle. Everything else basically stays the same: one defensive end still drops to a zone, the outside linebacker still drops to a deep third and they only real difference is the pressure point, and the spot that the deep safety is filling. The nickel drops into the fourth zone next to the filling safety.

The counter look is designed to take advantage of offenses that might look to cheat when they see a linebacker dropping into the deep third. The linebacker drops, just as he would on a regular creeper call, but instead of rushing unbalanced from a nickel or linebacker spot, Ohio State allows their defensive end to rush straight past the tackle, rather than dropping into a zone. The deep safety drops into a third, as does one of the outside corners, while the other corner, a nickel back, and two linebackers form the intermediate zone.

With the offensive tackle and quarterback anticipating a zone drop from Young, he is able to blow right into the backfield for an easy strip sack. Ohio State has only run this counter twice all season, and both have resulted in a strip sack.

This play is by no means an every down look and Ohio State is well aware of that. There are very specific situations that call for this look, and calling it in the wrong time could be disastrous for the Buckeyes.

Ohio State is looking for two things when calling this play. First of all, the Buckeyes only deploy this in passing downs, which means that you will only see it on first-and-10, second-and-7 or more, or third-and-5 or more. The reasoning behind this is pretty obvious. While the play works well, and create a lot of havoc, it also develops fairly slowly. The deep safety has to get up near the line quickly, and the defensive end has to drop quickly.

While they’re doing that, the offense does have a small opening for short passes or runs to those zones, and plays right into spots have been almost the only thing to beat this play through six games. On passing downs, teams are far less likely to settle for short passes or runs, which means that Ohio State’s weaknesses are usually safe, because offenses are looking for something bigger.

Secondly, Ohio State only calls this play when the ball is on a boundary. The side doesn’t matter, but the Buckeyes have to have a short side of the field to work with. This is mostly for the sake of the deep three zones, because they know that the linebacker is being asked to do a lot in that deep middle third. If the sideline is right there to help one of the outside cornerbacks, he can cheat inside a little bit and help whoever has to drop into the middle.

This also helps the defensive end and filling safety a little bit, but the difference there is negligible. The point is, if Ohio State is running a creeper blitz, it will be on a passing down, and it will be on the boundary.

Ohio State is growing more confident with this look, and will almost certainly be running it more frequently as the season goes on, but through six games, the Buckeyes ran a creeper blitz or a creeper blitz counter just 20 times, accounting for roughly 5.25 percent of their total defensive play calls.

When they did run it, it was almost always successful, allowing just a 20 percent success rate, to three passes and one run. The yards per attempt average isn’t great, sitting at 4.65, but that takes into account the lone touchdown allowed, Indiana’s 50-yard trick play touchdown pass. When removing a trick play that Ohio State won’t likely see again, the success rate drops to 15.7 percent, and the yards per attempt falls off a cliff, from 4.65 to 2.26. To put it simply, the creeper blitz is very rarely beaten, and when it is beaten, it usually doesn’t kill the Buckeyes.

On the 16 successful plays for the defense, Ohio State allowed 4-of-10 passing for minus-8 yards, two rushes for five yards and forced four sacks, including three strip sacks (one recovered). In passing down situations, that kind of success is almost impossible to generate, and Ohio State has done it consistently through six games.

As the season continues on, it’s only fair to assume that the usage will increase, just as it did through those first six games. The Buckeyes ran it just once against FAU, three times against Cincinnati, four against Indiana, back to three against Miami and Nebraska, but six times against Michigan State.

With matchups against teams that like to create big plays like Wisconsin, Maryland, Penn State and Michigan all still on tap for the Buckeyes, Ohio State will need passing down solutions, and right now, there isn’t a better one in the playbook than the creeper blitz.