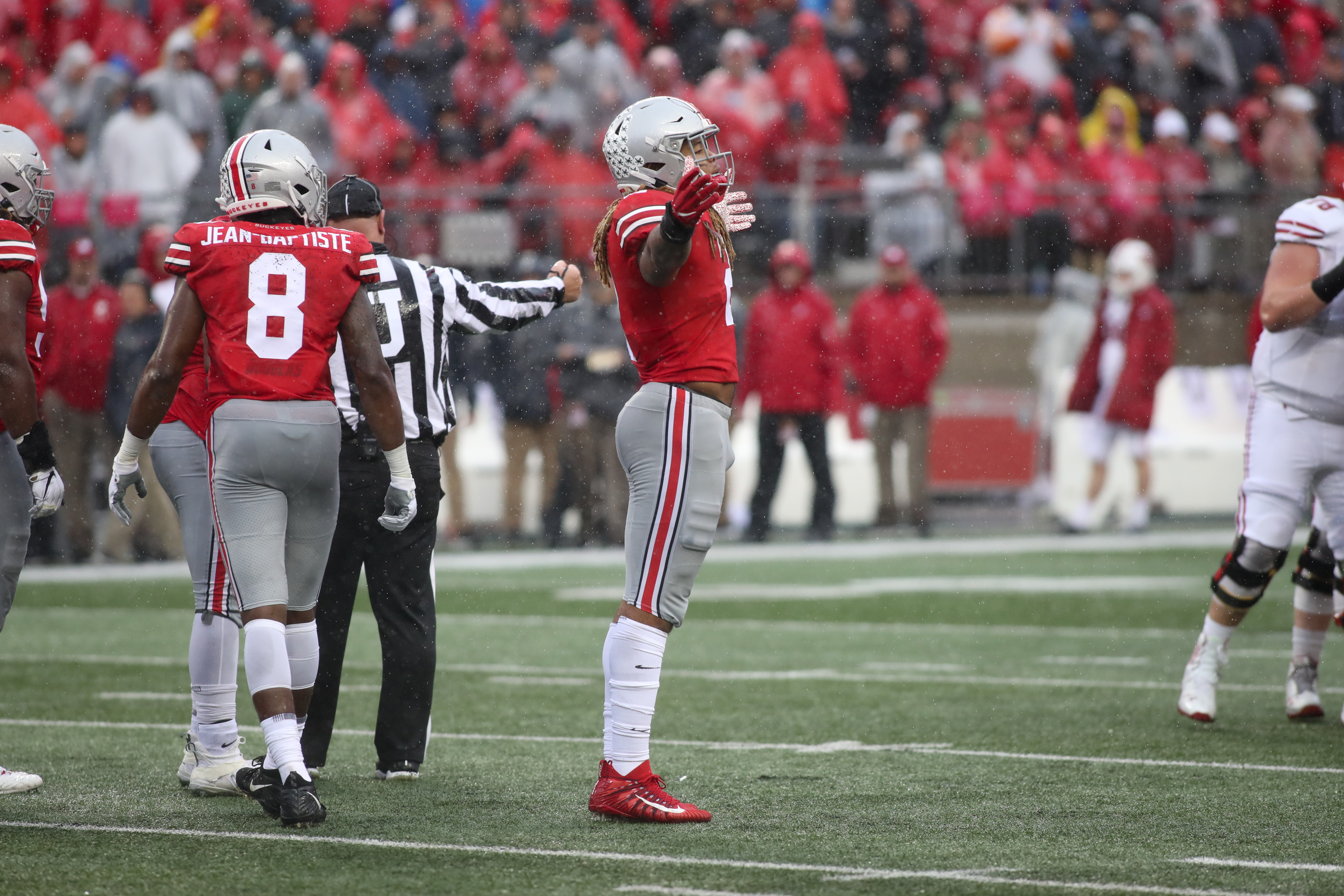 Ohio State entered its Oct. 26 matchup against Wisconsin with a pretty good idea of what the Badgers like to do on offense. It’s hard not to know about Wisconsin’s offense in 2019, given its position as a power outsider in a college football world that has moved primarily to spread offense and speed. The Badgers aren’t as smashmouth as they used to be, adopting the occasional spread look and abandoning an every-down I-form mentality around the turn of the decade, but there are still few college football teams more physical than the Badgers each year.

The same could be said about the 2019 rendition, which had looked like one of the best teams in the country through six games. A loss to Illinois put a damper on that start, but the stats and the film didn’t lie about the Badgers, painting the picture of a talented, physical, very good football team. Everyone they play has the book on them, but for most opponents, that means nothing. Wisconsin announces what it does, does it, and usually wins games despite it.

A lot of Ohio State’s success was personnel based. Coaching staffs spend all week preparing for big games but falter in their plans far too often, returning to what they’re comfortable with. It’s an easy mistake to make. Ohio State has yet to do that and this game was no different. The Buckeyes came in with a bold plan schematically and with their personnel and executed it all day long. A lot of that plan revolved around the usage of the 4-4 defense, like on the first play of the game.

The Buckeyes come out with Malik Harrison, Justin Hilliard, Tuf Borland and Pete Werner to counter Wisconsin’s 21 (two backs, one tight end) that gives the Badgers seven blockers for Jonathan Taylor. Stopping the run is all about winning the numbers game and Ohio State’s gameplan was essentially a bet that Jeff Okudah, Damon Arnette and Jordan Fuller could handle Wisconsin’s two receivers whenever the Badgers went with this kind of loaded box. The Buckeyes dared Wisconsin to throw and frankly, Wisconsin flinched.

With eight men in the box, Ohio State had no trouble when Wisconsin went heavy. The linebackers were responsible for adjusting and covering when the runs kicked outside while also filling cutback lanes. Meanwhile, the line just had to avoid getting knocked off the line, which it did all day. When the front works like that, the only answer is to air it out and Wisconsin never did, because the Badgers knew Ohio State was too talented to be beaten on the perimeter.

This third down play is an example of that great execution.

The Buckeyes are in a 4-3 with Pete Werner in a deep zone and Shaun Wade filling his place on a zone blitz, though the play goes away from Wade, because Wisconsin guessed wrong and assumed Ohio State would drop Chase Young into a zone. Ohio State didn’t, Young picked up the linebacker that was meant to be blocking a linebacker, freeing up Borland to fill a cutback lane and Harrison to get outside and stop Taylor before he can get going.

Back in the 4-4 here, Ohio State again has Wisconsin beaten up front and blows up an interior run.

This was Ohio State’s answer pretty much every time Wisconsin went heavy, be it in this 21 personnel look or in Wisconsin’s famous rhino formation that puts three backs and a tight end into the game, with the two fullbacks in the backfield to block for the running back and the tight end off the line. As mentioned, the best way to answer heavy personnel is with heavy personnel and Ohio State just executed more consistently with more talented players. Here, Jashon Cornell beats him man one-on-one and flies into the backfield for the tackle.

This was one of the rare examples of a successful Wisconsin play and it’s worth mentioning not because of the success but because of how Ohio State responded to it.

Wisconsin comes out with one receiver, two tight ends and two backs. Before the play, the tight ends flip and as the play starts, the entire team except for that offset tight end (off the line) block down, towards the strong side of the field. Jonathan Taylor runs a counter, follows his lone blocker in the tight end and gets a big gain because Ohio State bites hard on the counter fake.

In the next quarter, Wisconsin tries basically the same thing out of a spread look, with two tight ends and one back instead of two.

The line is again indicating a run opposite of the way the back actually goes, and Taylor is expected to follow his tight end and the two receivers on the strong side of the field. The tight end motion tips the play to Justin Hilliard and he makes an outstanding play identifying the run and beating the tight end to a spot to blow up the play before it can ever get going. This is what a smart defense looks like.

Back to the first quarter, Ohio State wasn’t exclusively winning on personnel groupings and talent. There were still plenty of fun and unique plays, like this one on a third and long.

Ohio State came out in what was basically a 3-4, with Chase Young as a standup middle linebacker and Baron Browning showing interior blitz. The first time Ohio State showed it, Wisconsin called a timeout, because the Buckeyes have yet to show this look all season. Out of the timeout, Ohio State called the exact same play. Baron Browning feigns a blitz and drops into a spy zone with Harrison, while the cornerbacks and Werner play man coverage with a deep safety overtop (cover 1). Young replaces Browning in rush and blows right past an overmatched guard.

The Badgers have a legitimate decent play call here with a screen call against man coverage, but sometimes, athletes just have to make plays. Chase Young made one, Wisconsin’s Garrett Groshek didn’t.

Back to the 4-4, Ohio State shows a new look here.

This is actually what they were doing pretty much every time out of the 4-4, but they rarely got the chance to show it, because Wisconsin almost never passed out of 22, 21 or any other heavy looks. Each linebacker drops into a cover 3 shell while the cornerbacks play cover 3 with the flexibility to route match (to switch to man, basically). Jack Coan wasn’t ready for a zone and goes down on a coverage sack.

Ohio State wasn’t just reading plays quickly once the ball was snapped and beating the Badgers with personnel and physicality. As shown here, there were plays where Ohio State knew the play before it even started.

This look showed up a few times on Wisconsin’s offensive tape this season, down to the one tight end, one back, slot receiver motion from a trips. This is a jet sweep all the way and Pete Werner points that out to Jeff Okudah before the play. Okudah adjusts and gets wider to avoid the receiver getting around him as he wants to. Okudah’s presence pushes the sweep right into Chase Young, slows the play down and allows Okudah to finish it off with an easy tackle. Again, smart defense, doing smart defense things.

Into the second half, Ohio State was making similar reads.

The linebackers pick up the outside run and swarm to the play side, filling any cutback gaps. Damon Arnette makes the same read and blows up the halfback in the backfield.

Ohio State wasn’t just outsmarting Wisconsin, it spent the entire second half with about a two-yard cushion, because the defensive line wasn’t just avoiding a push from the Wisconsin line, it was getting a push itself.

Davon Hamilton gets great penetration, the three linemen around him have similar success moving the line and allow the linebackers even more room to operate and make a play. This kind of push from a defensive line shouldn’t be possible against a line like Wisconsin’s, but Ohio State thoroughly outclassed and outworked them in the trenches, especially in the second half.

Oh, and Wisconsin put a tight end in one-on-one with Chase Young, on fourth and long.

Sometimes football is easy, like when Chase Young has one blocker on him that also happens to be smaller than he is.

This is the play calling of a broken team, because at this point in the game, Wisconsin had no answers left for the Buckeye offense, not to say that it ever really had answers to begin with. Ohio State beat Wisconsin so thoroughly that Paul Chryst asked a tight end to block Chase Young on a passing down with no assistance.