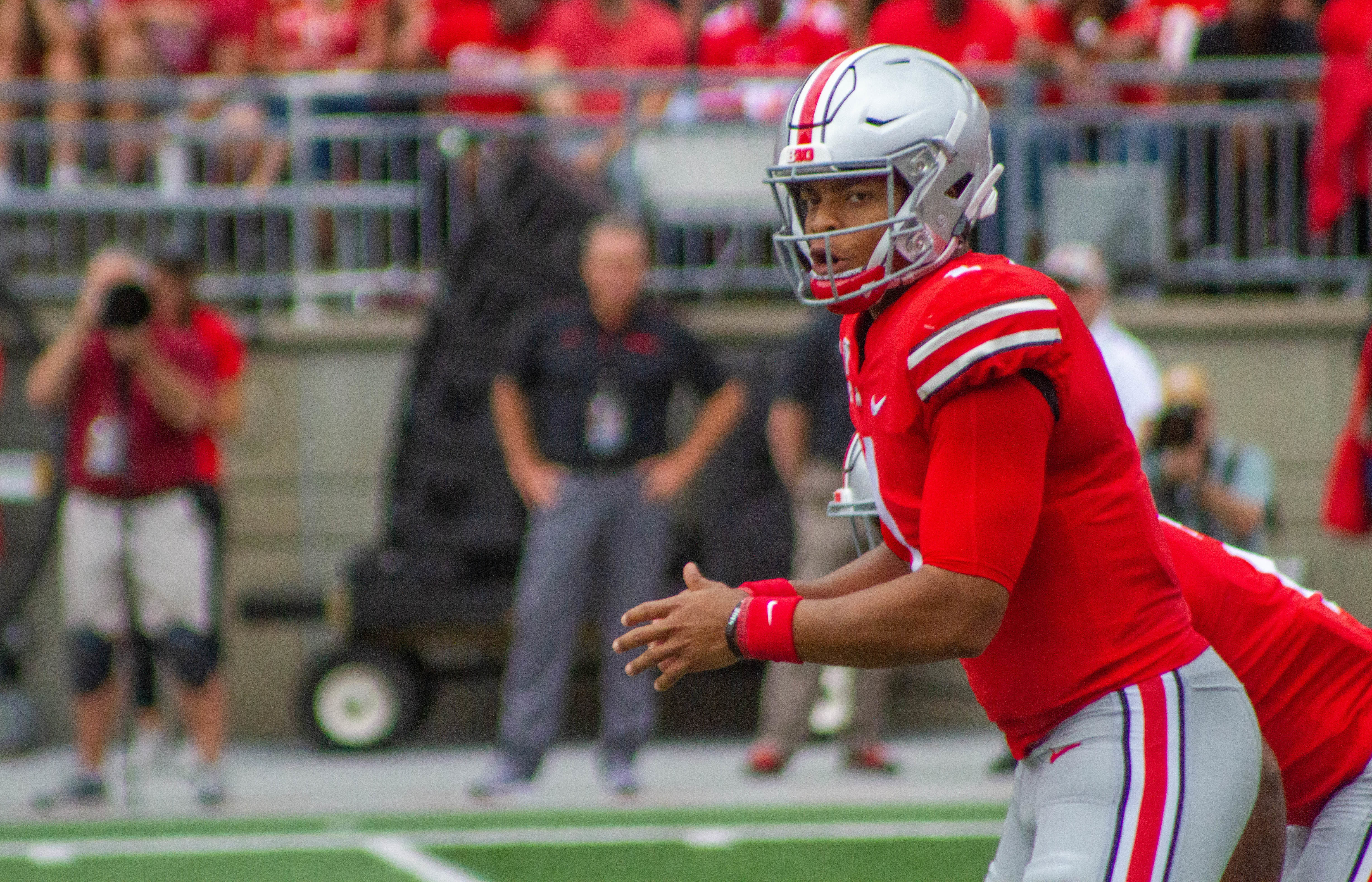 In his two seasons as Ohio State co-offensive coordinator, Ryan Day established himself as not just a capable play caller, but as an excellent play designer, especially in the passing game.

Day was responsible for J.T. Barrett’s late career turnaround, thanks in large part to his simple play design that made throws easier for the fifth-year senior. A year later, Day drew up a different offense, one that highlighted Haskins’ arm, rather than his legs as he had done with Barrett.

That adaptability makes it no surprise that Justin Fields is rolling early in his tenure at Ohio State. Despite his age, relative inexperience and adjustment into a brand new offense, the sophomore quarterback has been electric through two weeks, and was nearly perfect against Cincinnati, tossing for 224 yards and two scores while missing on just five of his 25 passes.

Fields is yet to throw an interception, and while his splashy plays are impressive, his greatest quality to this point has been his ability to avoid any mistakes. He occasionally doesn’t see an open receiver, or leaves the pocket too quickly, but Fields has yet to make an obviously bad decision.

That’s rare for a young quarterback, and while it should certainly be credited at least partially to Fields and his intelligence, you cannot talk about an Ohio State quarterback excelling without talking about the guy who has now produced what appears to be three straight high-level quarterbacks in three years.

We know that Day’s offense produces numbers, and we know how it worked with Barrett and Haskins, but what has changed this season for the new signal caller? Ohio State gave a good look into that process in their win over Cincinnati.

The most important part of Day’s offense is its ability to stretch defenses thin, and while the details change, that remains a constant this season early on. Ohio State is still picking teams apart underneath, and horizontally, before striking deep as soon as they show fatigue. That started early against Cincinnati, with Ohio State going almost exclusively horizontal on the first drive. This play shows a good look at what that means for the Buckeyes.

The five wide bubble screen from a bunched strong side is a frequent in Ohio State’s playbook, and while it is a pass, it should be thought of essentially as a modified run play, because it has the exact same intent. Ohio State is still looking for an easy, intermediate gain to counter Cincinnati’s line stunt, and to avoid running into a numbers disadvantage, they move that easy gain to the edge where they have more space and fewer defenders.

With two blockers out there, Ohio State is almost always going to be able to create five yards of space for K.J Hill and a one-on-one matchup after those five yards. With the threat of Fields as a runner up the middle to hold the middle linebacker in place, this is essentially impossible for Cincinnati to truly stop, and Ohio Sate did it constantly early in the game. With Cincinnati playing so aggressively early in the game, Ohio State’s ability to spread them out opened up room for big plays later.

Later on the drive, Ohio State shows off the same look, but highlights Fields’ feet and gashes Cincinnati because of it.

This comes back because of a hold, and the design is slightly different, but the idea is the same. Ohio State uses the threat of a screen to move the safeties and linebackers horizontally, creating wide open space for Fields to run it. The Buckeyes couldn’t do this with Dwayne Haskins, but they can with Fields, and that’s why it has been emphasized in Day’s playbook.

While this first drive didn’t end in points, it showcased the kind of early game play calling that opens up big holes later in the game. These plays tire Cincinnati out and force the Bearcats to defend every part of the field, instead of becoming one dimensional.

It was that early set up that created this big run from J.K. Dobbins in the second quarter.

The threat of Hill in the flats horizontally moves the safeties, while the threat of Fields as a runner holds the linebackers. Dobbins makes a great play breaking through, but this had been set up by just about every play that came before it. That’s good game planning and good game control.

But the most impressive part of Ohio State’s offensive performance wasn’t the big plays like the Dobbins touchdown, it was the basic, intermediate passing plays. Ohio State appears to be giving Fields half-field reads rather than full-field reads, to create easier passes and allow him to make good decisions without trying to do too much. Here, he has one such read, and completes a great ball to a wide-open Hill.

Ohio State has three receivers on the play side, and uses those three in a bit of a modified flood concept, which is essentially the perfect look to break Cincinnati’s zone call. Fields isn’t looking at all at the backside of the play here, because he doesn’t need to. His only read is the safety. If the safety (No. 3) bites on the post to Mack or the Berry route in the flats, the throw goes to Hill on a corner route. If the safety goes for Hill, the ball goes to Mack on the post.

Fields makes the right read and hits Hill for a good gain. The read is simple, just leaving it up to Fields to make it quickly and deliver an accurate ball. Credit to him for making the play, but this is a completion by design rather than by anything individually spectacular.

The Buckeyes give Fields another easy read on this RPO, because they know that one of the three options will be able to pick up yards. The first read is of the unblocked tackle, because if he stays home the handoff goes to Dobbins like a regular zone read. If he comes in, which he does, Fields pulls, and moves to his second read, which in this case is the coverage on Hill. If Hill is open on the out route, he throws the out route. If not, Fields just keeps for a quick run off the tackle.

That’s the exact kind of play that separates Ryan Day’s offense and makes it so dangerous. There’s nothing complicated here, because there doesn’t need to be anything complicated. The yards can be created with simple reads and that makes things so much easier not just for Fields but for everybody.

While Day’s offense makes it easier for quarterbacks to makes on-time throws, two of Fields’ plays weren’t created by play design and showcase just how special he could be as a player. The first came on Ohio State’s first touchdown.

The play here is obviously impressive on its own, but it becomes more impressive with the context Day provided after the game in his press conference. He explained that Ohio State was expecting man coverage, but Cincinnati played zone, which could have blown up the play. Instead, Fields read the zone and realized that the pass wouldn’t be open, so he escaped a dirty pocket and scored himself. That takes instincts, and it takes intelligence, both of which Fields has shown tons of so far.

The second play came late in the half, of this 39-yarder to Chris Olave.

Draw up great plays all that you want, and Day did on Saturday, but this is a big-time player making a big-time play. You cannot teach or scheme for this kind of creativity, and Fields is only going to get better at this kind of play as he gets older. With the help of Day calling and designing the plays, Fields’ talent and the skill position players around those two, Ohio State could have a Heisman contender on its hands, and one of the best offenses in the country for a third straight season.