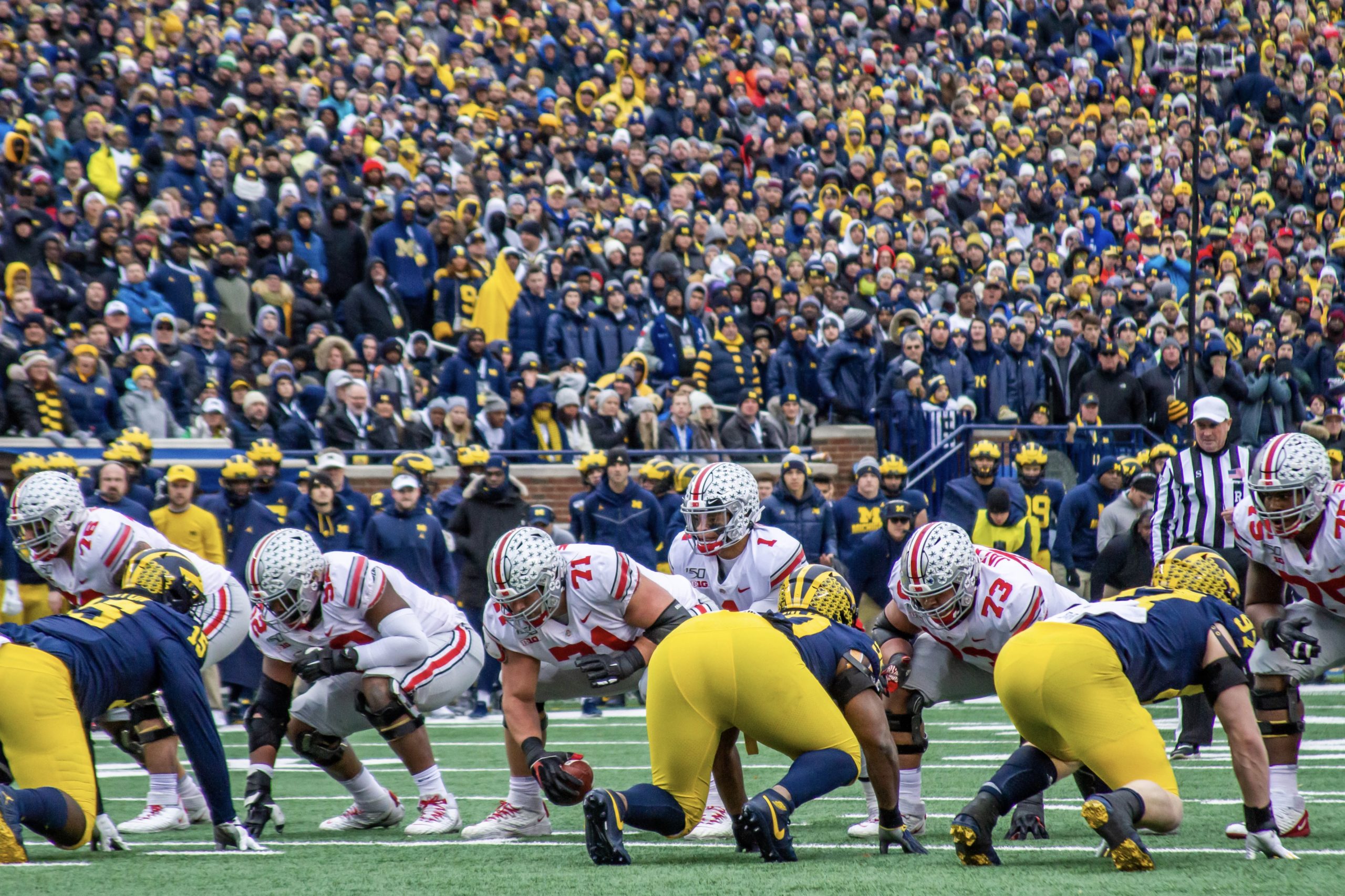 After a year of domination, there are very few things on Ohio State’s roster or resume that merit concern. The Buckeyes have one of the nation’s best offenses and an even better defense, led by a staff that has spent the year adapting and preparing better than almost anyone in the country. First-year head coach Ryan Day has elevated Ohio State to a level that may be untouchable for any opponent it faces, and almost ever weakness Ohio State has shown this year was either immediately fixed, or has been covered by immense strength elsewhere.

There is, however, one major concern about this team, and it happened to be exposed just a week before the biggest game of the regular season for the Buckeyes: sophomore quarterback Justin Fields, for all of his good, has a tendency to struggle with pressure. No, not the kind that comes with a big stage, the kind that only elite defenses, like Wisconsin’s and Penn State’s, have been able to provide against the Buckeyes this season. Fields has been excellent all season, but when a defense can get players in his face, he becomes mortal.

Against Penn State, the quarterback looked downright pedestrian, due entirely to the Nittany Lion pressure. Constantly watching for pressure gave Fields tunnel vision, and kept him from reading the defense downfield, where he would’ve found receivers open on essentially every play. The struggles forced Ohio State into a conservative gameplan, and while it worked, the showing raised some questions about Ohio State’s ability to handle a significant pass rush.

With a battle with Michigan, one of the nation’s top defenses coordinated by Don Brown, a strong proponent of unique blitz schemes, Ohio State had the chance to answer those questions, or at least find yet another cover for a weakness.

Obviously, given the final score, the Buckeyes were able to do just that. Ohio State rode a masterful game from Fields and J.K. Dobbins to a 56-27 win over a Michigan defense that looked overpowered all game. The pressure came, but Ohio State didn’t falter, sticking to a masterful game plan by a head coach who has dominated the Michigan defense in back-to-back seasons.

So, how did Day do it again? How does this keep happening to the Michigan defense against Ohio State? The answer, as it so often is with Day, was simplicity.

Ohio State’s game plan against Michigan was predicated, essentially, around two plays: inside zone split and outside zone. The Buckeyes have run both all season, and entered this game with quite a bit of confidence that the Michigan front seven would have no answer, as long as Ohio State was able to match numbers in the box. The Buckeyes used inside zone split with six in the box and outside zone for anything heavier. Michigan never answered.

This play on the first drive is pretty representative of the whole game. Michigan comes out with six in the box, so Ohio State puts Luke Farrell offset on the line and uses him to seal the isolated backside end. Meanwhile, the line is essentially just blocking down, while Dobbins looks to hit either ‘A’ gaps, between the center and guard. Josh Myers and Jonah Jackson clear the hole, and Dobbins has an easy big play. The whole point of this is to get Ohio State’s five linemen on three defensive linemen and two linebackers, because linebackers are quite a bit easier for offensive linemen to handle than defensive linemen are.

Not every inside zone went for big yards like this one (in fact, this was the best run off of inside zone on the day), but almost every single one was successful. Michigan was never able to stuff the box enough to stop Dobbins, especially because he was able to switch gaps pretty consistently, with the offensive line getting a massive push up front.

Somehow even more successful was the outside zone, which has been a staple of the Buckeye offense all season.

This was Ohio State’s go-to anytime Michigan showed blitz or put a heavy package on the field. When the box was loaded, Ohio State didn’t try to make things too complicated, nor did it look to ram into a wall: it just ran away from the mass. With such an excellent offensive line, the Buckeyes have been able to snuff out penetration on outside zone runs all season, just as was the case against Michigan. Ohio State had success running outside zone with all sorts of personal packages, from both the shotgun and under center, because at its core, this is Michigan’s front seven against six, seven or even eight Buckeye blockers. That’s a favorable matchup every single time.

Just like with the inside zones, it worked almost every time because of that mismatch. Here, Ohio State runs it out of the gun, with Farrell in as the lone tight end. The line blocks down, with Myers and the tight end looking to block second level, while Fields feigns a keep to isolate the backside end. Because the end is isolated, Michigan again finds itself with even numbers, despite a Khaleke Hudson blitz, meaning Ohio State just has to win its matchups.

The Buckeyes found the same results under center.

Dobbins is actually going opposite of the blocks here, which Ohio State has shown plenty this season, in an effort to take advantage of Michigan selling out to stop the base outside zone look. With Rashod Berry and Farrell sealing blitzers flawlessly, Dobbins just has to rely on his speed to run into a hole that Michigan ceded when it decided to blitz. Ohio State was a step ahead of Michigan all day, because of the slight variations it had on runs that Michigan never truly found answers for.

Now, not everything worked for the Buckeye offense, at least not flawlessly. Those concerns about Fields’ against pressure didn’t end up seriously hurting the Buckeyes, but they were certainly realized early in the game. He was off target on almost every throw on the first few drives, and really struggled to read the Michigan defense.

A large part of Fields’ early struggled were, in a strange way, the lack of pressure. Michigan sent just four rushers consistently early in the game, but did so from unique positions, including here on a creeper blitz. Then, behind the front, Michigan dropped into zone, which it had very rarely done prior to this game. Fields isn’t ready for it and abandons his reads almost immediately, making this a lost play.

To make things easier on his quarterback, Day simply made the reads for him. Michigan was running a lot of cover 2, so Ohio State ran plays designed to bust Cover 2, like this clearout pick for Garrett Wilson, paired with a Texas route out of the backfield. Michigan’s zone makes way for Dobbins, and Fields never has to look at anyone but his first read. This is an easy read, and an easy throw, both designed to give Fields confidence. Ohio State threw out a few more of these confidence throws, to establish Fields back into the game. Once he was comfortable, it was time to hit the zone again.

Michigan is again in Cover 2 here, and with trips left, the zone has shifted to handle to overloaded formation. Because of that, the defense isn’t ready when Chris Olave motions to the opposite side and runs a go route, putting safety Josh Mettellus into an impossible spot. Fields doesn’t make this throw if he isn’t confident, and he has that confidence because Ohio State gave him a quarter worth of throws to build his confidence back up.

That’s really what made this gameplan so impressive, and what ultimately led to a romp for the offense. None of this is complicated. It didn’t take extra weeks to prepare for, or extra thinking for any members of the team. Ohio State wanted to keep Fields comfortable, and force Michigan to stop something that it never had any chance to even slow down. With a line as talented as Ohio State’s football really doesn’t have to be complicated.

The Buckeyes lined up and ran right through Michigan’s defense all day, because it knew that there was no reason to do anything else. Ohio State will likely face a defense that can’t be so easily pushed off the field like this at some point, but Michigan is not that defense, and nor is Wisconsin. Until then, it’ll be green grass for Dobbins, and confidence for his partner in the backfield.