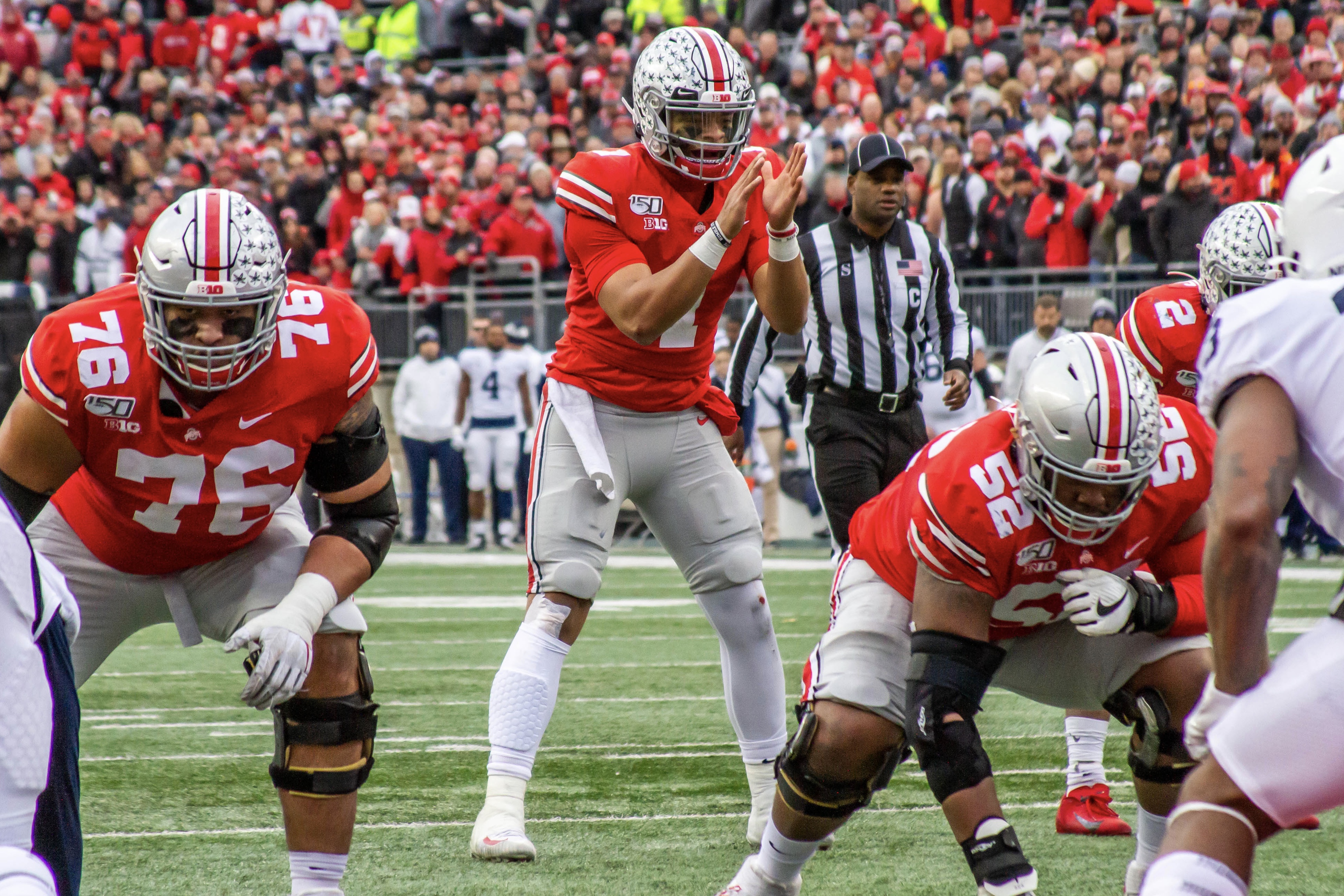 A win over a top-10 team is difficult to criticize too much, especially with the way that Ohio State has spent much of the year playing. The Buckeyes have been untouchable for much of the season, blowing through opponents seemingly regardless of the level of competition. There has been very little that has not worked for Ohio State this season, and that’s made it pretty difficult to find much of anything to complain about.

However, it was that standard that the Buckeyes have set through the first 10 games that makes the 11th, a 28-17 win over Penn State, a little bit easier to pick apart. Ohio State certainly did enough to win, and were it not for some bad turnover luck in the third quarter, it would have done enough to win pretty convincingly. Even without the turnovers, there’s plenty to talk about from the battle, and plenty of small things that the Buckeyes could afford to clean up before it heads to Ann Arbor, especially on the offensive side of the football, where Ryan Day was more conservative than he had ever really been.

On its face, that seems like a pretty poor way to approach a game with a team that was gashed on downfield passing each of the last two games, as Penn State was against Minnesota and Indiana. The weakness of the Nittany Lions is the defensive backfield, and for the most part, Ohio State didn’t attack it, especially late in the game. Why was that?

Well, a lot of it can be chalked up to Heisman Trophy-contending quarterback Justin Fields, and the Buckeye offensive line. Both have been excellent this season, but it was a bad showing for the sophomore quarterback and a worse showing for the line, even though it only allowed three sacks.

Starting with Fields, it’s important understand the kind of game that he had to understand Ohio State’s second half gameplan. Him numbers were solid, passing for 188 yards and two scores on 16-of-22 passing, but the film is far less impressive than the numbers. He struggled, as he has for much of the season, with deep passing. That took away Ohio State’s ability to beat Penn State over the top pretty much from the beginning, and the staff was never quite confident enough to go back to it consistently.

This play on the first drive of the game is a good example. Fields had Chris Olave open for a touchdown if he makes the right throw, but he feels some pressure and floats the ball, allowing John Reid to catch up and very nearly grab an interception. Fields did pretty much the same thing in the very end of the first half, finding Olave a second too late and missing on what would have been a touchdown.

While Fields struggled with the deep passes, he was solid underneath. Penn State was giving that room to Ohio State, so the Buckeyes took it. Conservative or not, Penn State really didn’t want Ohio State to beat it deep, and when Fields showed that he really couldn’t the Buckeyes stopped trying to. With the Nittany Lions playing so far off, room was opened up underneath for quarterback running, which Ohio State did more of on Saturday than it has all season.

Again, this could be read as conservative, and in some cases it should be. There were some questionable quarterback run calls, especially in the fourth quarter with a quarterback that had, despite his success on the ground, fumbled the ball twice, with a third coming on one of those game game fourth downs. However, in general, Ohio State took what it was given. In most instances, that was plays like this one to Austin Mack.

Penn State is running a cover two, with a five man shell underneath and the middle linebacker filling in behind the first down marker. With just four rushers, Fields has time to read the zone, and finds Mack wide open in the soft spot of it. Mack was running a quick sit route, designed to look like a slant to the defense, forcing those outside corners to allow him to sneak into the middle. With a tight end corner route to pull the middle linebacker away, Mack has all sorts of room, and Fields is good on the timing for an easy first down.

This is the kind of play Ohio State had success with. Even when Fields was struggling with confidence late in the game after his fumbles, the Buckeyes were able to go back to plays like this and find consistent success. They probably could have afforded to pass like this more frequently late in the game, but Ohio State can take some solace in the fact that it won, firstly, and that when it wanted to, there were no real issues passing the ball down the field in short chunks.

What the Buckeyes couldn’t do, however, and what compounded some of the struggles, was run outside zone.

These are three different instances where the Buckeyes tried, and failed to run outside zone. This is where the line can be given the lion’s share of the blame, because frankly, they played a bad game. They struggled with stunts, as they have for much of the season, and got little to no push after the first drive of the game. Penn State’s front seven is very good, but this was a disappointing showing from one of the nation’s best offensive lines.

On each of these outside zones, the Buckeyes suffered the same fate, for the same reason. The line didn’t know what to do about extra rushers on the edge, and allowed at least one defender to run free into the backfield. The beauty of the outside zone is that you can form a wall with a line washing down, making a numbers disadvantage a non-factor if executed correctly, because everyone is caught in a big pile. Ohio State has been able to create that kind of pile all season, but just couldn’t get the seal blocks against Penn State.

Is that concerning? Sure. Penn State’s defense was havoc-heavy coming in, more-so than anybody in the country outside of Clemson, Oregon, and more importantly for right now, Michigan. The Nittany Lions are faster and better tat creating tackles behind the line of scrimmage than almost anybody in the country, and struggling against that isn’t the end of the world. However, Ohio State has to do it again next Saturday against Michigan, and the result can’t be the same if they want to win that game. J.K. Dobbins has to have room to run outside for this offense to truly work as intended.

These type of issues were illustrated again on one of those fourth down calls that Buckeye fans have been making a stink about.

The secret here with this third down quarterback keep is that the play call is perfectly fine. It’s not the best call in the world, but Ohio State had been having a ton of success on designed runs in passing situations like this one, because Penn State was bailing to cover the pass down the field. In this case they didn’t, which really can’t be predicted, and despite that, Ohio State was still a better Dobbins’ block away from a first down. You can complain about this being an Urban Meyer style call all you want, but the fact of the matter is that it very nearly worked, even with Penn State covering it the exact way they needed to. It just came down to execution.

Ultimately, as alluded to, Ohio State isn’t going to play a lot of defenses like this one, and it had yet to show these kind of struggles against anyone else. A one game sample size is not enough to say that there are any serious issues with the offense, especially when the 10 game sample size is as definitive as anything that the Buckeyes are the nation’s best team, and one of its best offenses. There will be changes made before the Michigan game, but there’s likely no reason to be worried about the outside running game.

There is, however, cause for concern about Fields’ handling of blitzes. He’s had one flaw all year: he takes too many sacks. It makes sense that a young quarterback would, especially one as talented as Fields, as he’s always looking to make a play. He can be tricked by disguised blitzes, and if Ohio State has one real issue this year it would be that. This way true against Penn State more than maybe any other team this year, and would be true against Michigan if he isn’t fully prepared for a massive package of blitzes.

The first sack that Fields took may have been the worst, because he truly just didn’t know what he was looking at. Penn State comes out with six on the line, showing a heavy rush, but drops into a traditional four man front with the strong side end dropping to Thayer Munford’s outside shoulder. The Nittany Lions bring only four, with a stunt on the weakside end to the inside shoulder of Wyatt Davis. The rest of the defense just drops into that Cover 2 look, and Fields has wide open in the same place he had Mack earlier in the game.

However, he isn’t looking downfield. He’s still caught up on the preplay motion, and never makes the backside read, because he freezes from the pressure. Penn State gets the sack despite just a four-man rush, which is exactly what that preplay motion is designed to do against a young quarterback.

The second comes from an actual rush, and a rush Penn State used a lot of Saturday, with what is essentially a delayed fifth rusher from the linebacker spot after the front four have already made contact. This is a three-man front with a corner blitz serving as the fourth rusher right off of the snap. The line picks that up well, and Fields keeps his eyes downfield, but he shuts off his body to the field as soon as the linebacker comes into view, even with Olave wide open on a drag route.

This is the concern for Ohio State, and more than the underthrows, probably the reason for the conservative gameplan. Fields was good when he had time, but Penn State didn’t have any interest in giving him time.

When there was pressure, he struggled to find open receivers, and lost too many yards for the offense to justify going back to a downfield passing attack when the game was on the line. Conservative play calls are frustrating, but a turnover or a couple more sacks late in that game could’ve given Penn State’s offense the only thing it was able to find success off of all day: good field position.

Similar to Penn State, that’s likely what would keep Michigan in the game on Nov. 30, even as the Wolverines surge into looking like the second best team in the conference. Michigan isn’t good enough to keep up with the Buckeyes on their own, but if Fields struggles with the pass rush like he did against Penn State, Michigan can absolutely create enough havoc to keep up. That makes pressure detection key number one for the Buckeye offense heading into the biggest game of the regular season.