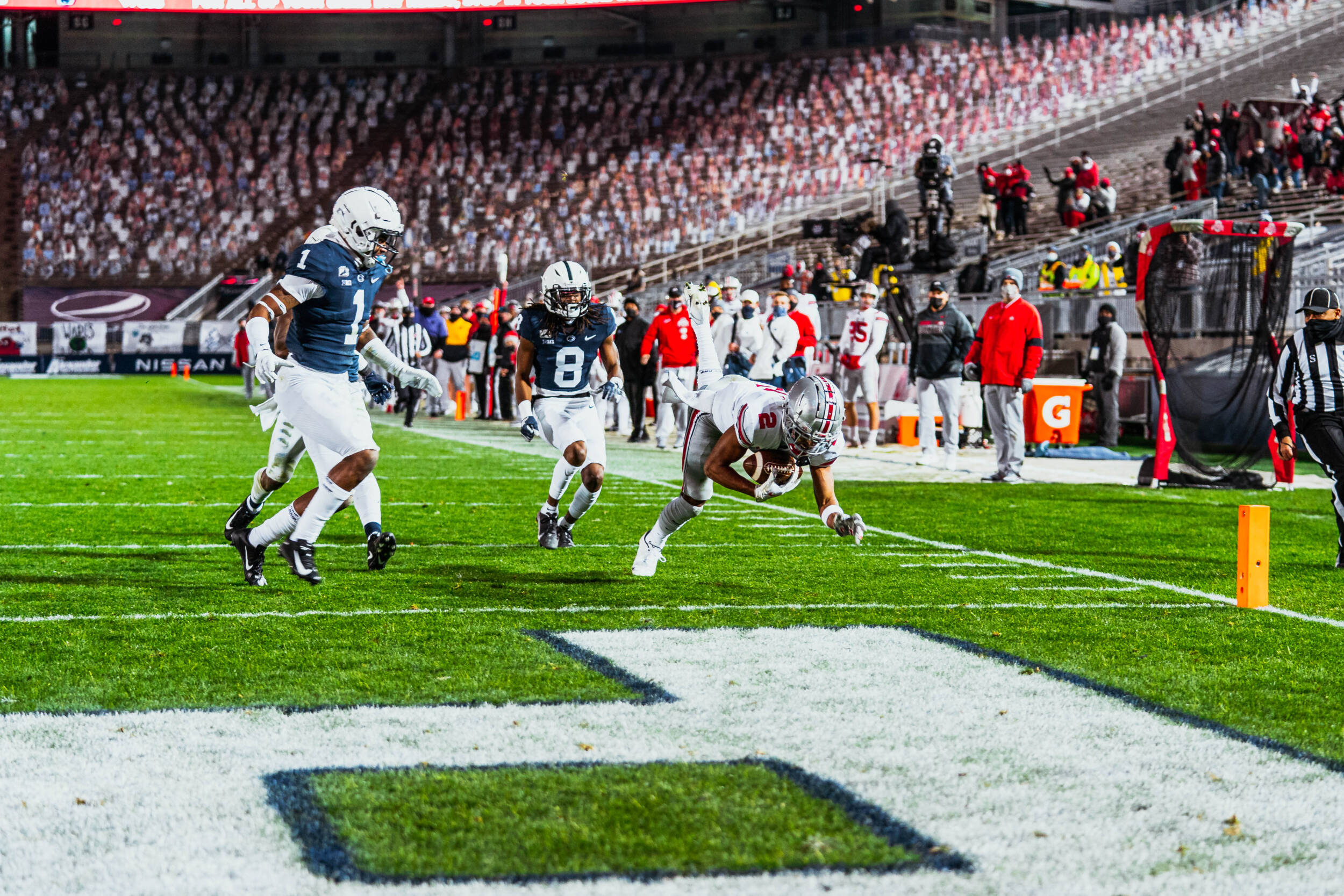 Entering the 2020 season, there were murmurs and whispers around Columbus that this edition of Ohio State’s offense could be the best that the program has ever seen. With star quarterback Justin Fields back for another year, Garrett Wilson and Chris Olave back on the outside and one of the best lines in the country up front, all working under a brilliant offensive coach in Ryan Day, it’s easy to understand those thoughts.

While it’s impossible to crown these Buckeyes with the title of best offense in school history through just two games, it certainly seems like that optimism was justified, because Ohio State is just getting started and it’s already almost impossible to get this group off the field. Fields has meshed with Wilson and Olave as well as anyone could’ve possibly imagined and Day seems to be having a ton of fun scheming those two open. While that hasn’t yet extended to a third consistent target, it may not need to if the duo is able to continue hauling in basically everything thrown their way and nothing yet has indicated that they’re slowing down.

Really, it’s a quarterback/wide receivers/coach combination made in heavy. Fields is supremely accurate and able to hit just about every throw on the field, while possessing some of the best pocket mobility in college football, even if he does hold the ball a second too long sometimes. Wilson and Olave are tremendous route runners with speed to burn, elite hands and a knack for finding soft spots in the defense. The speed and route running ability means that they can’t be covered reliably in man, while their creativity and spatial awareness makes zone coverage a no-go. There’s simply no good way to cover these guys without fielding two or three elite cornerbacks, which isn’t a sustainable model for any of the teams left on Ohio State’s schedule.

Then you have Day, who shined for his first three years in Columbus as an elite play designer with a knack for understanding game flow, but has evolved into something even more in 2020, thanks to the talent on the field. He’s able to dedicate more blockers to keeping Fields upright in the backfield, knowing that he needs just two receivers running routes to create an opening. He’s setting up plays with increasing complexity, adding wrinkles onto wrinkles because he has an experienced quarterback that can actually throw the ball down the field for the first time in his tenure with the Buckeyes (sorry, J.T. Barrett). This passing game is a killing machine.

The running attack isn’t there yet and likely won’t get there this season. Master Teague and Trey Sermon are limited as runners because of their physical traits and Ohio State seems unwilling to go with an unconventional pick at the position that may be better suited for the offense, like Demario McCall. The return of Marcus Crowley may be what Ohio State needs to kick this part of the offense back into elite form, but there’s no telling when that will be, or if he’ll even be the same player that he was in 2019. There’s also no real reason to think that it’ll matter any time before Jan. 1, 2021 at either the Rose Bowl or the Sugar Bowl, depending on where Ohio State lands within the top three of the final rankings. Draw the right first round opponent and it may not even matter until Jan. 11.

While the run game is always going to be limited by those halfbacks, Ohio State did actually seem to find a groove running the ball against Penn State on Saturday night, specifically with Teague. Teague struggled quite a bit against Nebraska, but Ohio State reworked the way that it runs the ball and the formations that it uses to run to create a better environment for Teague, which he seemed to take to. He still wasn’t J.K. Dobbins, but it’s worth looking at what the Buckeyes did to make things easier on him.

First, however, we have to look at what set the running game up, because essentially every Day play call is connected. A lot of Teague’s success was connected back to the very first play of the game.

This is a jet sweep from a singleback, two-tight end set, pretty much a completely brand new look for the Buckeyes both in formation and in actual play. Wilson is on a jet motion to the strong side of the field, with Ohio State hoping to use that pair of tight ends and Olave as lead blockers, while selling an inside run with Teague on a fake after the sweep handoff (this will be important later).

To sell that, pretty much the entire line is blocking as it would on a dive play. Everyone but Thayer Munford blocks down, appearing to clear the way for a B gap run to the strong side of the formation, while Munford kicks out to force Jayson Oweh inside, where he can be sealed off from the sweep with ease. The defense reads the line and pretty much the entire front six bites on it. With those six out of the play, Ohio State really only has three defenders left to worry about, because the back side corner is already out of the play and the back side safety is too far down the field to scheme up a blocker to handle him.

That leaves the outside linebacker, play side corner and play side deep safety. Ohio State has three players remaining and could block all three, but instead dedicates Luke Farrell to making sure that the seal is strong, preventing any linebackers from shooting outside and blowing up the sweep. He doesn’t have anyone to block here, but it’s still a good idea to have him there. Jeremy Ruckert handles the most pressing issue, the outside linebacker, with a fantastic block, while Olave seals off that safety, leaving the cornerback for Wilson to account for. He does, and Ohio State has a huge gain that it then uses the rest of the game to set up about 10 more big gains. Flawless.

There’s a great example of that here. After struggling with short-yardage running against Nebraska, Ohio State went to the drawing board looking for a solution that didn’t involve running Fields 35 times a game. It found – as a lot of teams have in recent years – misdirection through motion. You can do a lot of damage up the middle with window dressing that forces a defense out of the middle of the field, which is exactly what motion accomplishes.

That’s especially true when that motion does damage early in the game, like on the Wilson jet sweep. When you have a big play like that, it forces the defense to respect the motion, which means that linebackers are shifting more, defensive backs are staying back out of the box and ends are looking to set a harder edge.

Here, the motion doesn’t move the defense a ton, but it splits those linebackers just enough that Trey Sermon is able to slip into the gap for a first down, while the job is made at least a little bit easier for the offensive line, which is still going up against a loaded box, but a confused loaded box. An indecisive loaded box.

This was a driving force behind a lot of Ohio State’s gameplan. The Buckeyes didn’t show this formation and this motion look a ton, but when they did, it was usually successful, be it on the ground or in the air. Having seen the dive modification on third-and-short before off of this motion, Penn State isn’t biting in a similar situation here. The linebackers stay in place, no one follows Wilson, and the eyes are in the backfield to stop a run up the middle.

So, of course, Ohio State fakes that run, sends the halfback into the flats off a play fake to draw a linebacker to him and away from an intermediate zone, rolls Fields and slips Wilson unaccounted for into the second level. Play sequencing is a lost art that very few coaches still understand, and when Day flashes his knowledge of it, it makes for a really delightful watch.

The Buckeyes added some wrinkles to it too as the game went on, to keep the defense from keying in on a few possible looks. Here, from a three wide receiver set with a tight end lined up off the line, Ohio State shows motion to the boundary again, this time with Olave, and pairs it with an outside handoff play fake, offensive line selling it and all. The defense attacks the boundary hard, expecting either the off tackle run or a pass to Olave off the motion.

Instead, Ohio State flips the script and shoots Wilson across the field during the play fake, into the – again – completely uncovered part of the field that Penn State vacated in trying to cover Olave. Football is already pretty easy with talent like this, it’s a whole lot easier when that talent is running plays that have been set up by other plays.

That’s the entire Buckeye offense right now. Big plays aren’t just single-use actions, they serve as precursors to more later in the game, setting the defense up to expect one thing out of a look before it gets hit with the exact opposite look. Ohio State is using its supreme talent to exploit defenses earlier in games and then playing off of that to make everything very easy for every member of the offense in the second half. Day is five steps ahead on every play call he makes, because everything has something attached to it that he knows he can show later on in the game. It’s easy to assume that there are wrinkles and connected plays in this playbook that Ohio State has still yet to show and will likely keep hidden for at least the next two weeks as it plows through bad opponents, because the stuff it has shown is more than enough to win the conference. When big-time opponents roll around and that playbook open up even further with a quarterback that now seems to have a full grasp of the offense, that “best offense in school history” title may start to feel like an understatement.