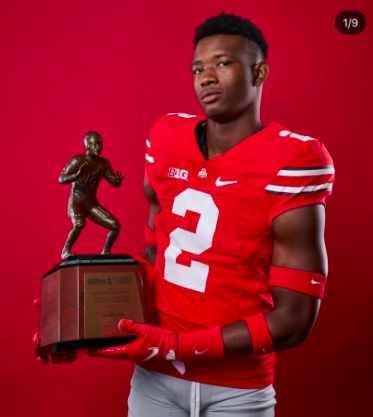 247 Composite Rankings: He’s rated as the 70th overall prospect, seventh-best defensive end, and the No. 10 recruit out of Florida.

How he did in high school: Jackson helped Chaminade-Madonna Prep to its fourth state title in five years and the third of his career with a 21-0 shutout of Berkeley Prep in the Class 3A title game, entirely shutting down a powerful rushing attack.

One of the finest pass rushers in the nation, Jackson finished his senior campaign with 15 sacks and 65 total tackles, including six in the title game, two tackles behind the line of scrimmage and one sack.

Why he committed to Ohio State: Jackson’s decision came down to the Buckeyes, Alabama and Oklahoma, with the Sooners serving as Ohio State’s primary competition at the end. Ultimately, as his dad detailed to Eleven Warriors, the coaches and atmosphere at Ohio State was enough to hold off the Sooners – perhaps a decision made even easier in retrospect by Lincoln Riley’s departure.

“Well, we sat down and talked a week prior to him making a decision,” Jackson Sr. said. “We feel that Ohio State is a more mature atmosphere, even the coaches. These are older and more mature, classy guys who can get the job done on and off the field. They can make him a great man as he proceeds with life after football.

“I’m not saying that Oklahoma or Alabama can’t do it, we just were more comfortable as parents letting him decide on Ohio State, even though he picked the school himself. We broke it down to the lowest common denominator. We just went from there. We feel happy and elated that he made an adult decision even though he had the help of both of his parents. We just felt like Ohio State was the best choice for him.”

Where he fits in for 2022: Given the expected return of defensive end Jack Sawyer, the presence of Jack Sawyer and J.T. Tuimoloau in the class of 2021, and general depth at the position, it seems unlikely that Jackson will contribute in much more than a spot role in year one. However, if those two freshman ends are any indication, Ohio State is willing to play young ends and could look to work Jackson into the rotation, especially if Harrison decides against returning, or if one of Javontae Jean-Baptiste or Tyler Friday isn’t around for whatever reason.