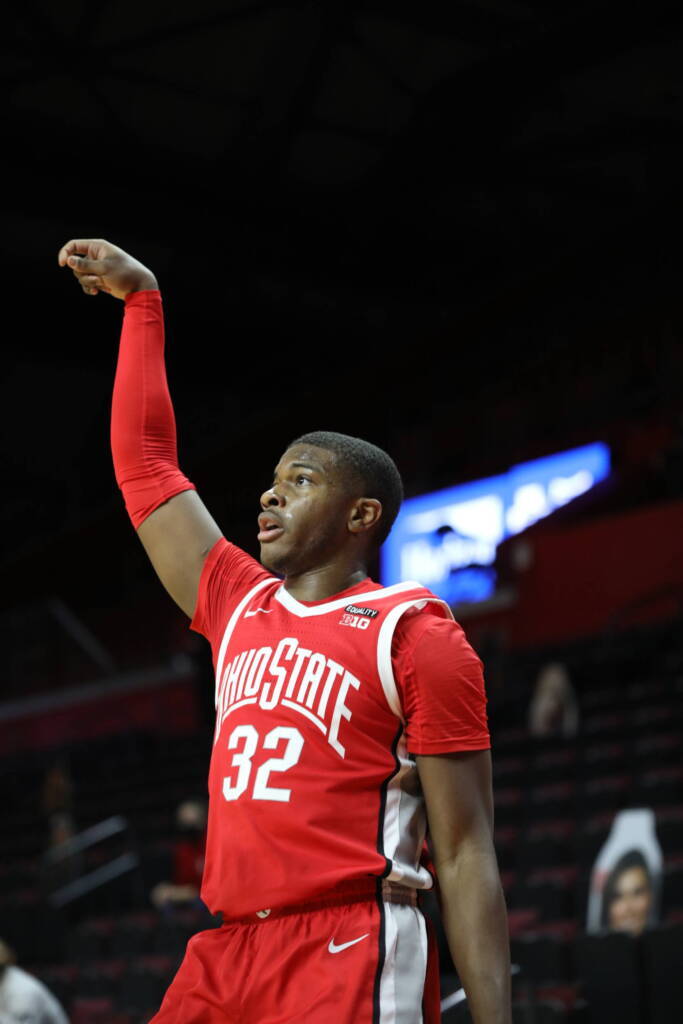 “It is my home-state school, but that’s not what motivated me today. It was my teammates; I felt like I needed to do more to help us win today,” Liddell said. “I didn’t really have the best game against Northwestern and that’s why they stayed in it most of the time. But I felt like today I just did everything I could for my teammates and today, it was just scoring, and that’s how we got the win.”

Junior guard Duane Washington came up clutch at the free-throw strike for the Buckeyes, connecting on four foul shots in the final 23 seconds to hold off Illinois, who cut the lead to 83-81 with 15 ticks left on a three-pointer by freshman sharpshooter Adam Miller.

The Illini used a 7-1 spurt to cut a 10-point Buckeye lead to 78-74 with 48 seconds on the clock, with a three-pointer from fourth-year junior wing Jacob Grandison sandwiched between two strong finishes by sophomore center Kofi Cockburn.

Illinois junior guard Ayo Dosunmu scored four straight points to cut Ohio State’s lead to 74-67 with 3:38 left, but Liddell answered with a smooth jumper and split a pair of foul shots to push the lead back to 10 with 2:28 on the clock.

Against Illinois’ full-court press, junior wing Justin Ahrens drilled his third three-pointer in a seven-minute stretch to push the Buckeyes’ lead to 74-63 with 4:40 to play.

“That was a great example of him not flinching,” Holtmann said of Ahrens. “They were making runs, they were playing well. But the reality is that was probably the best shot we were going to get on that possession, even though it was in transition and early in the clock, I just don’t know if we’re going to get a better look than Justin with a wide-open three. Really proud of him for stepping up.”

Dosunmu knocked down a tough bank shot from mid-range to cut the Buckeyes’ lead to 56-48 with 12:31 left, but Ahrens drilled a three-pointer and graduate forward Seth Towns converted an and-one to push the lead to 62-48 with 10:31 remaining.

“Everybody had to step up,” Liddell said. “We just keep piggybacking on each other, having each other’s back and, I mean, everybody is going to step up when their time is needed. And if they feel like they’re relied upon, everybody’s going to do what they need to do to win. If it’s extra-effort plays getting on the floor, getting the rebound or getting the steal.”

Illinois cut Ohio State’s lead to 52-46 with 13:50 to play on an old-fashioned three-point play by junior forward Giorgi Bezhanishvili, but the red-hot Liddell responded with back-to-back jumpers to push the lead back to double digits.

Liddell opened the second half with a stepback three-pointer for the Buckeyes to put the visitors up 18, but the Illini did not back down, responding with a 15-4 run across 4:55 to cut the deficit to 50-43 with 14:41 on the clock.

After Illinois tied the game at 15 with 12:49 until halftime, the Buckeyes blasted the Illini on a 15-0 run in just a 3:15 span, capped by eight straight points from Liddell, including a pair of triples.

“Players win games, really proud of our guys’ effort today,” Holtmann said. “They made plays throughout the game and down the stretch. We have tremendous respect for this Illinois team, and came in knowing obviously they were coming off a tough loss. They’re really talented and well-coached, so it’s it’s obviously a win that we feel proud of and excited about. We had a number of guys step up; everybody who played in the game made great contributions.”

Dosunmu led the Illini with 22 points and five assists, adding two steals. Cockburn finished 7 of 7 from the floor for 15 points and 11 boards.