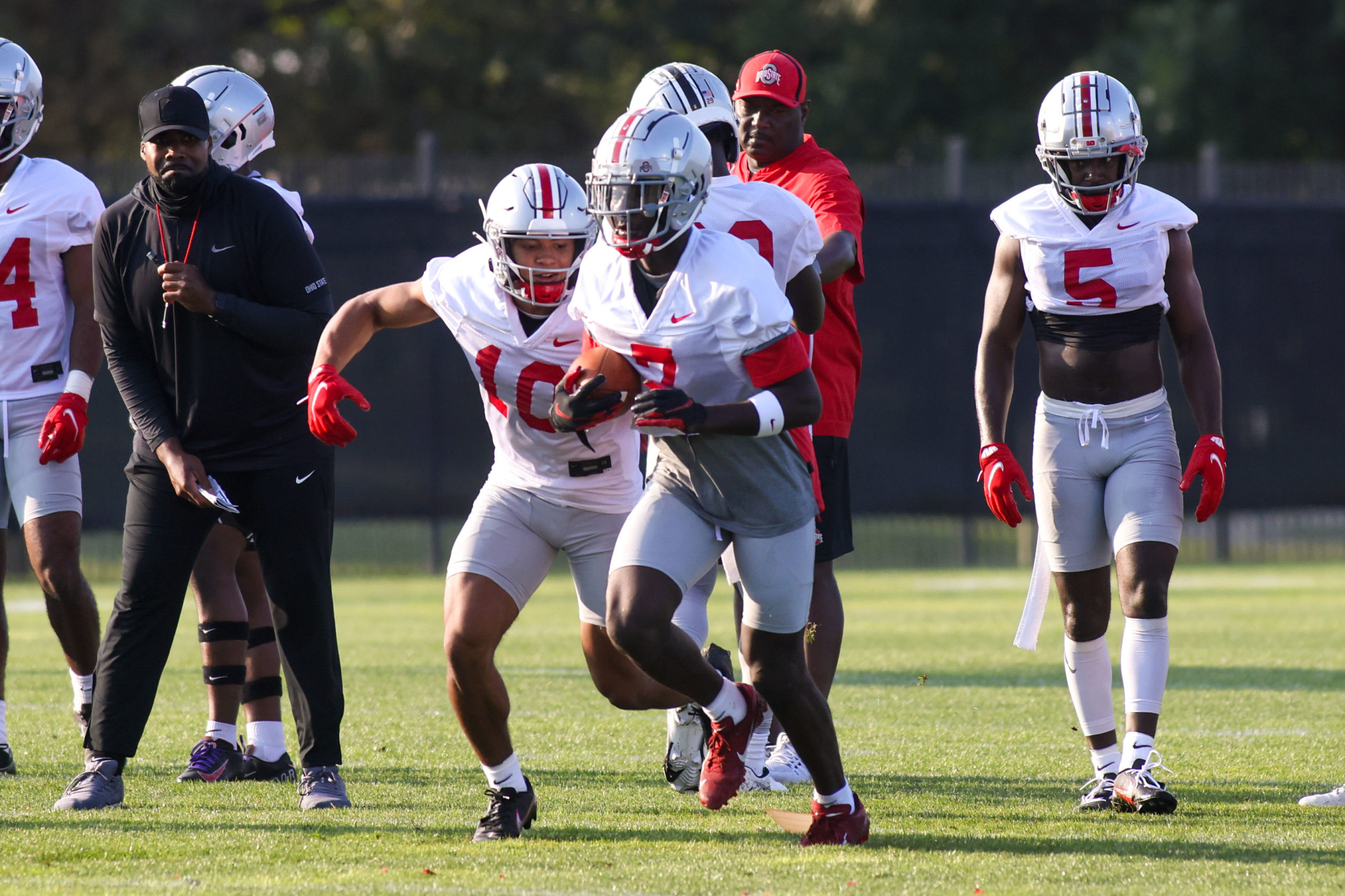 No starting quarterbacks, captains or first-team lines were announced Monday, but Ohio State head coach Ryan Day did issue a handful of pertinent updates regarding the Buckeye defense following the fifth practice of fall camp.

Of note, Day said senior cornerback Sevyn Banks has missed the past couple practices with an injury issue, freshman defensive end J.T. Tuimoloau has started to turn some heads with his talent during camp, and redshirt sophomore Steele Chambers has officially settled in as a full-time linebacker after spending the past two seasons at running back.

“Sevyn kind of tweaked something, so he’s been out for the past couple practices,” Day said. “Excited to see him get into practice, because he had a really good summer and we’re expecting big things from him this year. But he hasn’t really been out there as much.”

Banks, a first-time starter at outside corner in 2020, missed the spring with an undisclosed injury, and was seen limping after practice on Friday.

Although he may not have been referring directly to Banks’ situation, Day said a few Buckeyes have suffered leg contusions in the earlygoing, which he attributed to the team not being allowed to wear lower extremity pads. Day said he strongly disagrees with rules prohibiting lower body protection at this stage, but the Buckeyes will be in full pads for the first time on Tuesday.

Up on the defensive line, Day said at Big Ten Media Days last month that Tuimoloau –– the No. 4 recruit in the class of 2021 –– would have a “different lead-up” to the season due to his late commitment to the program.

However, Day said Tuimoloau has made some serious strides in his preparation after a week of fall camp.

“I’m not in the meetings as much with him, but the feedback I’m getting from coach Johnson and some of the other coaches –– but then also what I see on the field –– is a tremendous attention to detail, very conscientious, takes a lot of notes, can take a meeting to the field in short order,” Day said. “And so, because of that, he’s made up a lot of ground in a very short amount of time. So he’s flashed, he’s learning.”

Day said Tuimoloau moves like a 250-pound player, but the heralded prospect from Washington is listed at 6-foot-4, 275 pounds.

“He still has moments where he’s still not sure where to go or what to do, but you can see the flashes and brilliance of a 272-pound defensive end who can run,” Day said. “But then when he does know exactly what he’s doing, he’s making a lot of plays and we’re having a hard time blocking him.”

At linebacker, Al Washington’s unit has seen a boost from Chambers this past week, as the Georgia native has agreed to transition to defense full-time.

“He has natural instincts over there,” Day said. “It’s something that we wanted to take a look at and asked his feedback this past week, and he said he’d like to try it full-time. Absolutely. The guys on defense have been very, very impressed right from the jump. You can usually tell right away if somebody’s just natural at it. He is. He’s very, very athletic, so he’s really upgraded that room and I expect him to make an impact this season.”

Chambers played linebacker in high school, and had long been rumored to be considering a switch to that position given the laundry list of talented names in Tony Alford’s running back room. Day said he thinks Chambers will provide depth to the unit early in the season, but could have a more significant impact as things move forward.

Ohio State’s sixth practice of fall camp begins Tuesday, with the season opener at Minnesota to take place on Sept. 2.