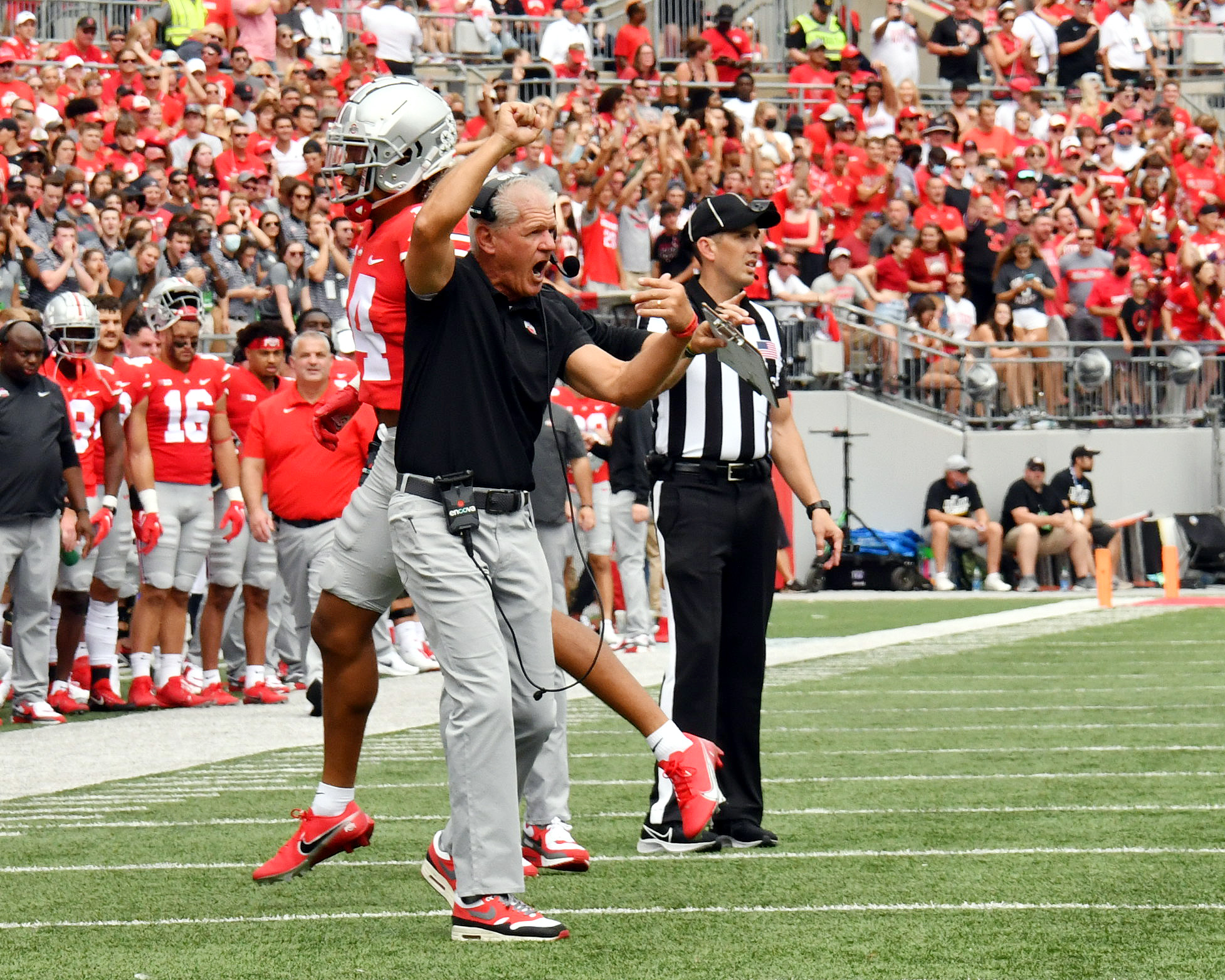 When asked, at his weekly press conference on Sept. 14, if embattled defensive coordinator Kerry Coombs would be calling plays for Ohio State on Sept. 18 against Tulsa, Ohio State head coach Ryan Day gave a telling answer – even if he didn’t want to.

“I don’t want to get into specifics, I want to keep looking at it this week,” Day said. “I don’t think it’s something that we’re going to decide right now either. It’s going to be something where we all get in there, take a hard look at everything we’re doing from scheme to structure and figure out what gives us the best chance to win against Tulsa. No hard decisions have been made that way yet.”

As Ohio State enters just its third game of the season, it does so in a state of serious flux, specifically on the defensive side of the ball. Following a 35-28 loss to Oregon that saw Coombs’ defense embarrassed on a national stage for the second time in Ohio State’s last three games, the Buckeye head coach said that just about every option is on the table for trying to fix the defense, from minor adjustments to a structural shake-up that he again declined to elaborate on.

“We’re giving up too many yards and too many points,” Day said. “It’s not just a single game. It’s a pattern… (We’ll be making) some adjustments here not only how we’re attacking other offenses, but also just structurally how we’re doing our day-to-day operations.”

“We have to ask hard questions and maybe make things uncomfortable. That’s part of my job. It’s going to be over time, we’re going to get there. Right now we’re going to work through it.”

What that shake-up could look like, well, that still seems to be firmly in the air, unless Day has more of a concrete plan than he’s letting on in the public sphere. Given Ohio State’s adherence to the single-high safety looks that it’s deployed since Day took over, it seems unlikely that the Buckeyes will make full-scale scheme changes in the middle of the season – seeing as that may fall into the category of overreaction in Day’s mind.

“We are going to make some adjustments and changes,” Day said. “We have to. … You want to act, you don’t want to overreact. You want to make sure you do things the right way and allow people to do their job. But when it gets to a certain point, you have to get things fixed. That’s what we’re going to do.”

Still, Day has said repeatedly since Ohio State’s first defeat of the season that serious adjustments are needed, and has indicated that those adjustments could impact just about every part of the Buckeye defense. A wholesale philosophy shift mid-season? A staff reshaping? Personnel changes at just about every defensive position? The details are fuzzy, but Day’s message is crystal clear. It’s now or never in Columbus.

“You put on the film and if something doesn’t get fixed, it needs to get addressed. I have no problem having those type of conversations,” Day said. “It’s pretty simple to see what needs to get fixed.”