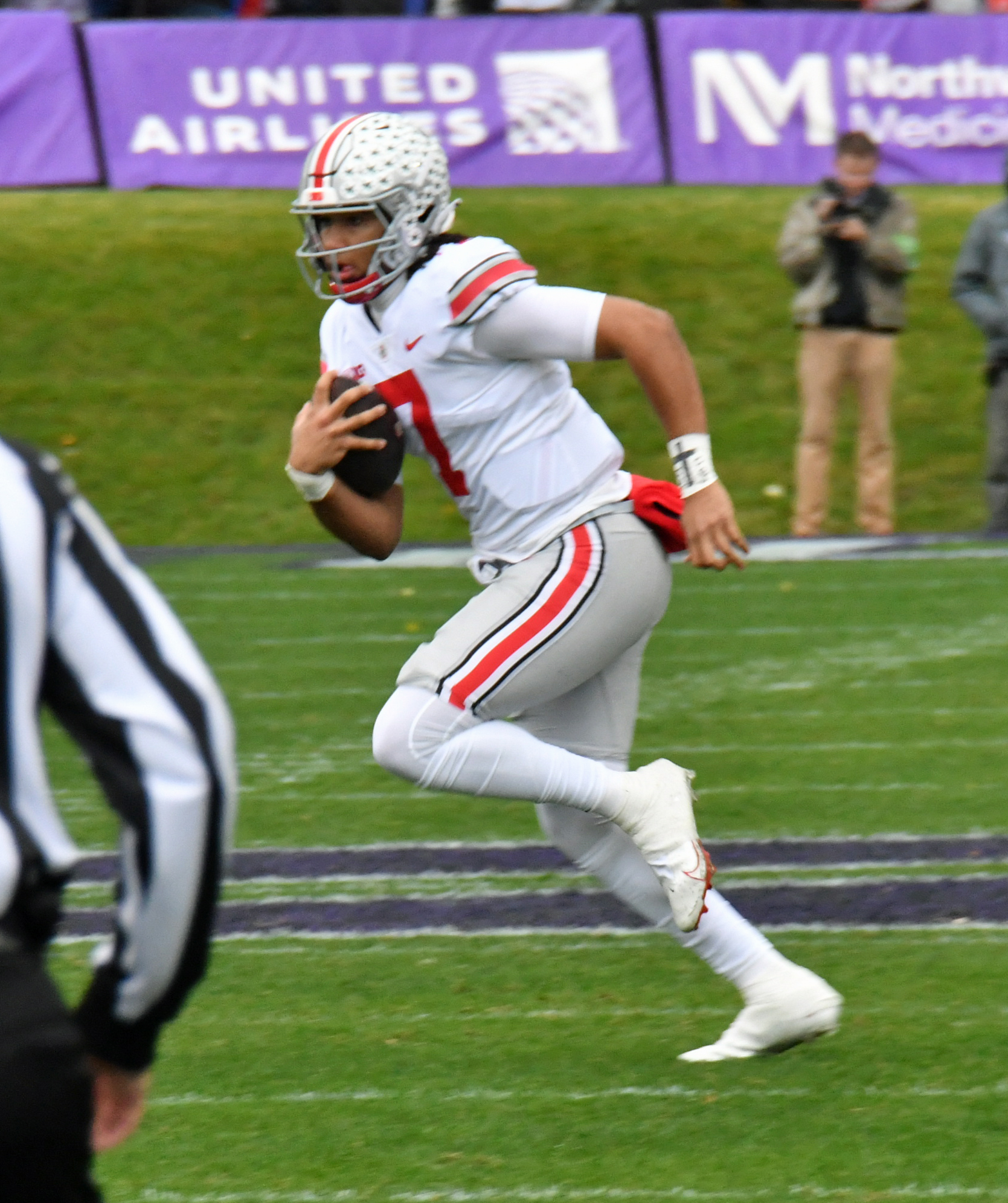 As Ohio State and Northwestern battled in adverse conditions, with whipping wind speeds reaching as high as 40 miles per hour and rain drenching the playing surface at Ryan Field in Evanston, Ill., head coach Ryan Day knew that the Buckeyes would have to adapt rather than stick to their guns.

The Buckeyes had attempted to throw the ball with and against the wind, but could not find consistent success through the air. Although quarterback C.J. Stroud struggled to find a rhythm with his arm against the Wildcats, finishing with career-lows in completion percentage (38.5 percent) and yards (76), he turned to his legs — which have been of little use since his 48-yard touchdown run on his first carry as a freshman against Michigan State.

“We had to find another way to win,” Stroud said. “I’m like that every game where I tell coach to run me if he wants to or if he doesn’t, that’s up to him. Usually every run play I do have a read. I read a certain player. So, a couple of times in the game where my defender or my gap was closed off or it was open, so I would take it.”

Stroud posted a career-high 79 rushing yards against the Wildcat defense and boosted Ohio State’s ailing offense with several clutch runs in important moments. As the Buckeyes struggled in short-yardage situations for much of the first half, Stroud stepped up in the shotgun on a pivotal fourth-and-1 with 3:18 remaining in the second frame. Stroud took the snap and put the ball in the stomach of running back Miyan Williams before ripping it out and taking it himself along the right side of the field — dashing for a gain of 16 and a much-needed first down. The Buckeyes scored the equalizing touchdown two plays later, on a 15-yard sweep to wide receiver Emeka Egbuka.

Stroud added another pivotal run during the second half, as he dashed for a 44-yard gain off another option keeper to push the Buckeyes to the Northwestern 2-yard line with 5:02 remaining in the fourth quarter. The 44-yard pickup was the second-longest tote of his career, trailing his previously mentioned touchdown run against Michigan State. Ohio State, again, scored two plays later, this time adding an insurance score and lifting its lead to double-digits.

As Stroud had picked up a reputation amongst Ohio State fans for his reluctance to run the ball, Day noted that Stroud has expressed a desire to run the ball more, but Day added that they like to keep Stroud in situations where he’s not putting his body on the line.

“C.J. wants to run. He said the same thing last week, he said that. But we know how important it is to keep C.J. healthy and he’s not going to take shots unless we need him to,” Day said. “We needed him to today and he did it. So you can see what he’s capable of, and when we need him to do it, he’s there for us. And he’s a weapon. He’s got good feet, you could see him running down the sideline, almost took that one all the way to the house.”

Day emphasized that he tries to find a balance between keeping his quarterback healthy and utilizing his running ability in the offense, pointing to former OSU quarterback Justin Fields sustaining injuries ahead of the 2021 College Football Playoff National Championship against Alabama. While Day looks to strike that balance he noted that he’s happy he cut Stroud loose to run, noting that he played a key part in the Buckeyes’ 21-7 win over the Wildcats.

“That’s the balance you try to find, of ‘Is it worth it to get the quarterback involved and expose him to shots that could potentially get him out of the game?’ Or do you need those yards, and I think that’s where you have to make good decisions,” Day said. “You have to take a deep breath at times and keep working through that, knowing that if you involve the quarterback, yeah you might gain more yards but you also expose him to hits.

“We needed it today in these conditions, at the right time. Those two runs were huge. We didn’t just throw them in there to make 4 yards, they were big hits.”