Column: The More Youth The Better For Buckeyes 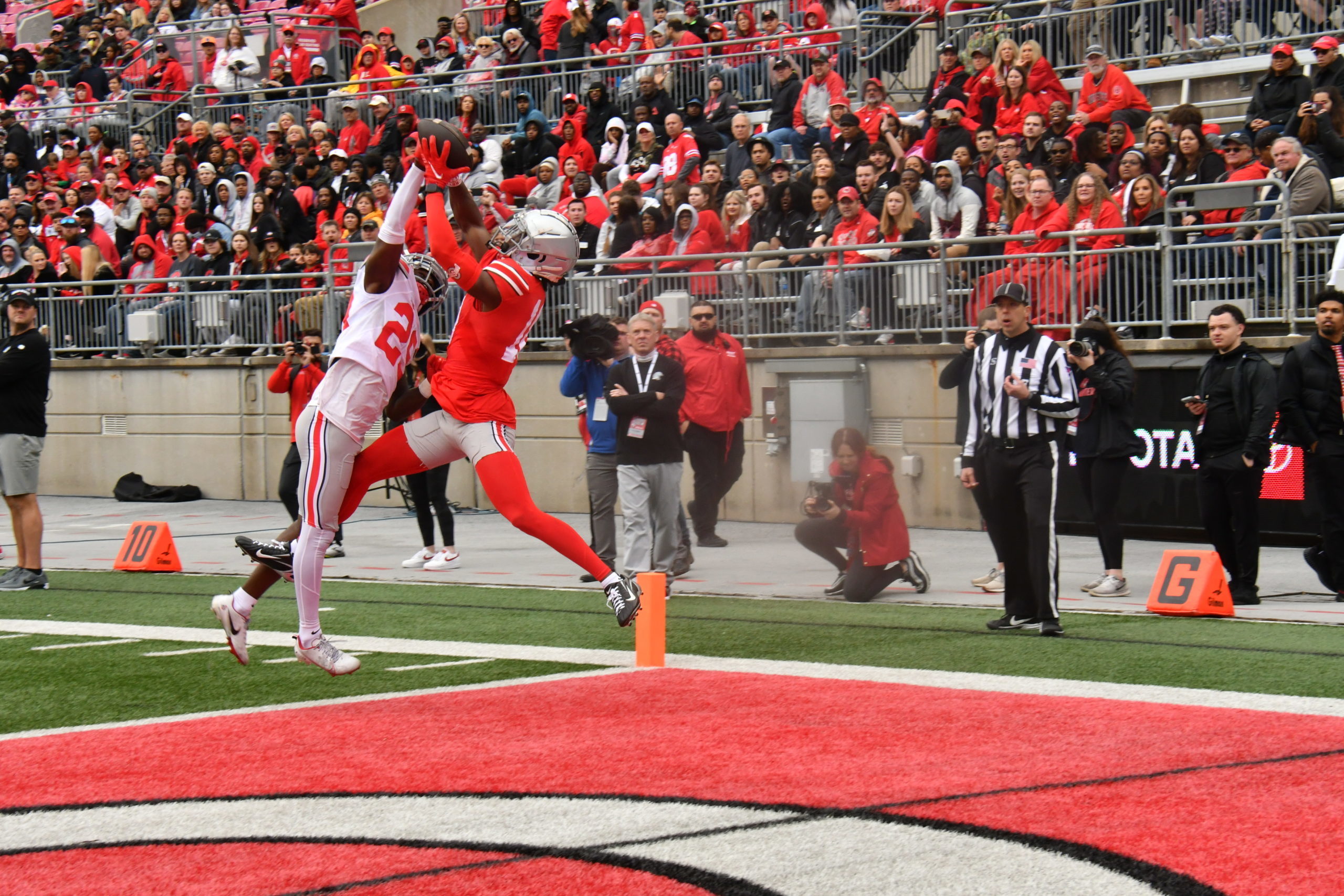 The old adage in college football is that a veteran team is a strong team. From leadership qualities to physical development to the wit and awareness that come with experience, it’s long been thought that if you’re building a college football team, you want to grab as many veteran contributors as you can, both for their talent and for their ability to handle adversity.

Generally speaking, that’s still true. The College Football Playoff was packed with veteran-laden teams in Cincinnati, Georgia and Michigan last season, and it was at least partially due to the experience gap that the Bulldogs were able to topple the lone group of youngsters in the event, Alabama, in the national title game. Many of Ohio State’s best teams have been bolstered by a tremendous class of upperclassmen. The adage exists because in most cases, it’s correct.

But Ohio State’s history offers a different point of view, too. Think back on the most recent national title seasons in Columbus. In 2014, Ohio State was forced by an injury to Braxton Miller to slot J.T. Barrett, a redshirt freshman, in at quarterback. When he went down against Michigan, it was redshirt sophomore Cardale Jones who saved the day and led the Buckeyes to a national title. He did so alongside sophomore halfback Ezekial Elliott, with redshirt sophomore Michael Thomas, sophomore Dontre Wilson and redshirt freshman Jalin Marshall all seeing time at wide receiver – and behind an offensive line that had to build on the fly in 2014 and returned four starters into the 2015 season.

Opposite Jones, on the other side of the ball for the Buckeyes, class of 2013 standouts Eli Apple, Vonn Bell, Joey Bosa, Gareon Conley and Darron Lee led the way, joined by immediately contributing freshman linebacker Raekwon McMillan. Ohio State had veteran players, Michael Bennett, Corey Brown, Josh Perry, Devin Smith and Adolphus Washington all chief among them, but the driving force behind that team was its sophomore class. A year later, with one of the most experienced and talented teams in school history, Ohio State fell flat, struggling to kick into gear and ultimately falling short of a playoff berth that it had seem all but guaranteed entering the season.

To go further back, look at 2002. The first name to come to mind from that team is obviously freshman tailback Maurice Clarett, but he was just one in a group of several youngsters who overachieved their experience level to lead the Buckeyes to glory. Wideout Chris Gamble was a sophomore, as was cornerback Dustin Fox. Linebacker Bobby Carpenter, who played every game, was a true freshman – just like battery mate A.J. Hawk. That bunch wasn’t as young as its successor in 2014, but it arrived a year early and came up short as an older group in 2003, going 11-2 without Clarett.

Ohio State’s 1968 team, perhaps the greatest in program history, is so well-known for its youth that it garnered the “super sophmores” moniker, led by second-year players like Doug Adams, Tim Anderson, John Brockington, Mark Debevc, Leo Hayden, Bruce Jankowski, Rex Kern, Mike Sensibaugh, Jim Stillwagon, Jack Tatum, Jan White and Larry Zelina, all of whom were at one point in their careers honored as All-Americans. It’s known, of course, for failing to follow up that title with a second in 1969 or 1970, despite fielding the same core group of superstars.

All of this is to say that for many schools, age is king. But for Ohio State? There’s nothing wrong with a little but of youth. And yet again, as it did for so much of the 2021 season, it was the young core of this Ohio State roster that impressed most at the final practice of spring for the Buckeyes, the annual spring game on April 16.

Extrapolating too much from a spring scrimmage is a risky game, so I won’t yet anoint safety Kye Stokes as the next Tatum, but the youngsters who proved themselves at least in parts last season were once more the stars of the show at the spring game. Offensively, it was redshirt freshman tailback Evan Pryor who captured the attention of many, carrying nine times for 62 yards and a score despite the modified (and seemingly ever-shifting) tackling rules, while snaring another four receptions for 44 yards – including one that went for 35.

Tight end Gee Scott Jr. is in his third season but can be counted too as a young player thanks to his positional switch ahead of 2020, making this just his second year in the position. He led all receivers with five catches, trailed closest by Pryor and by Pryor’s 2021 classmate Emeka Egbuka, who looks to be in pole position to claim a starting spot at wide receiver opposite fellow sophomore Marvin Harrison Jr., who had just one catch on Saturday but was just about always with the first-teamers.

The defensive generational gap was even starker. Ohio State’s best defenders a season ago were freshmen, and this season, they’re sophomores. Jack Sawyer and J.T. Tuimoloau are without question the top defensive ends on the team, combining for five tackles – with three of them being sacks. Alongside them on the line, Tyleik Williams may be down some pounds but he looked just as imposing at defensive tackle, disrupting interior blocking all afternoon.

Even true freshman Caden Curry got in on some of the fun up front, recording 2 1/2 tackles and a TFL while working against the second-team offensive line. If Mike Hall Jr. has taken the steps his coaches and teammates have claimed he has, there’s a real case to be made that the four best defensive linemen on the team are all products of the class of 2021.

Behind them, true freshman C.J. Hicks looked to be operating at a different speed than many of his positional counterparts, recording 4 1/2 tackles and 1/2 of a TFL of his own. Classmate Gabe Powers added four tackles, offering a look at what may be the future at linebacker for the Buckeyes – and what should perhaps be the present, depending on what the older guard in Columbus has to offer.

The secondary was packed to the brim with underclassmen. Denzel Burke was Ohio State’s top cornerback as a true freshman and may be one of the nation’s best in his sophomore campaign. Second-year cornerback Jordan Hancock looked ready for quite a bit more playing time, as did classmate JK Johnson. Like on the line, Ohio State’s best three options at cornerback may all come from the 2021 class.

At safety, redshirt freshman Andre Turrentine and true freshman Kye Stokes were all over the field, finishing second and third in tackles with 7 1/2 and 6, respectively, behind only the 8 of Tommy Eichenberg.

This isn’t to say that the Buckeyes are without veterans. This group is expecting to return more production than any Buckeye team has in quite some time, and has several veterans who it will lean on for major contributions, be it third-year quarterback C.J. Stroud and his favorite target Jaxon Smith-Njigba; every member of the offensive line short of sophomore Donovan Jackson; the entire projected lineup for Larry Johnson’s group (senior Zach Harrison and extra-year seniors Jerron Cage, Javontae Jean-Baptiste and Taron Vincent), Steele Chambers and Eichenberg at linebacker and the secondary group of Cam Brown, Ronnie Hickman, Tanner McAlister.

Those players will have major roles to play and will be looked to for leadership. But the best Buckeye teams – the ones that win titles – are those that aren’t afraid to hand the keys over to the youth. As it exits spring camp, the outlook for this bunch looks no different.