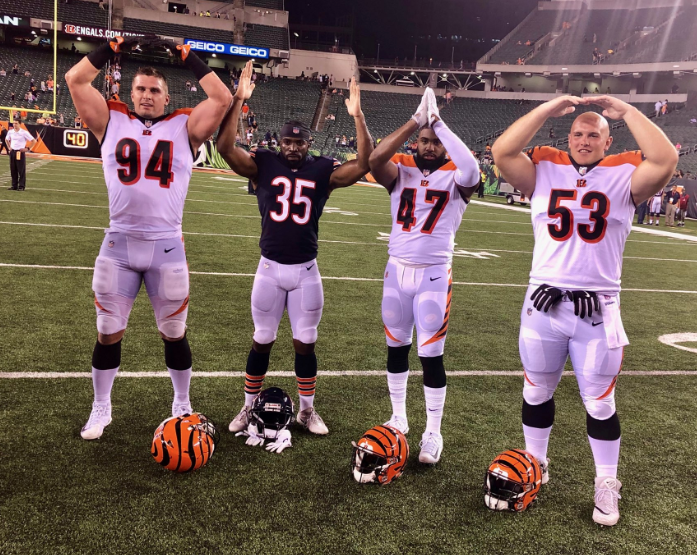 Week one of the NFL’s preseason kicked off in full force Thursday with 12 games, most of which included Ohio State products in action. Among the former Buckeyes to take the field throughout the evening, plenty of players from the 2017 squad made their professional debuts for their respective teams.

How did they do? BSB takes a look.

As a first-round pick in the 2018 NFL draft, Ward was taken at No. 4 overall and expected to make an immediate impact with the Cleveland Browns. On the road against the New York Giants at MetLife Stadium in East Rutherford, N.J., Cleveland started Ward at cornerback, where he tallied two tackles for the Browns as they recorded a 20-10 win.

The real highlight, however, came during Ward’s huge hit early in the first quarter against Giants wide receiver Hunter Sharp to break up New York quarterback Eli Manning’s third-down pass at the Cleveland 40. When he stood over Sharp, though, Ward was flagged for unsportsmanlike conduct.

From Buckeyes To Bengals

Down the road from Ohio Stadium in Columbus, a trio of Buckeyes from the 2017 squad united with a fellow Ohio State product at Paul Brown Stadium in Cincinnati.

After the Bengals completed their 30-27 edge of the Chicago Bears, the four former OSU players gathered near midfield and resembled an O-H-I-O.

From left to right, in the linked photo below: Hubbard, former Ohio State cornerback Doran Grant (2011-14), Worley and Price.

Hubbard and Worley each recorded a tackle for the Bengals while Price, who was taken by Cincinnati at No. 21 overall in the first round of the 2018 NFL draft, started at center.

Grant, who played for the Buckeyes from 2011-14, registered two tackles for the Bears.

FOOTBALL IS BACK!!
O-H… #GoBucks pic.twitter.com/eKjXX4FAfy

Best Of The Rest

From OSU teammates to NFL rookies, Lewis and Jones crossed paths as the Indianapolis Colts pulled out a 19-17 result against the Seahawks at CenturyLink Field in Seattle. Jones stepped into the Seahawks’ first-team offense at right tackle, but he left early with a sprained ankle. Prior to his exit, Jones did not allow a single pressure on 11 pass-block snaps, according to Pro Football Focus.

Two other Ohio State products, defensive end John Simon (2009-12) and safety Malik Hooker (2014-16), are also with the Colts. Simon was a top performer for Indianapolis with 1 1/2 sacks, but Hooker did not make the trip as he continues to recover from an ACL injury that ended his rookie season in 2017.

Jonathan Williams gives us our first lead of the game! We're leading 24-20 with 2:45 left in the 4th quarter #NOvsJAX pic.twitter.com/jvXJDCfZDQ

Among three backup quarterbacks to see time for the New Orleans Saints on their way to 24-20 triumph past the Jaguars at TIAA Bank Field in Jacksonville, Fla., Barrett attempted two rushes but lost two yards and did not throw a pass. However, he did lead the go-ahead drive for 30 yards on six plays, culminated by a zone-read give to Saints running back Jonathan Williams.

Reunited with former OSU cornerbacks coach Kerry Coombs, who was hired in January to become secondary coach of the Titans, Webb tied for a team-high five tackles and added a pass break up at safety despite Tennessee’s 31-17 loss to the Packers at Lambeau Field in Green Bay, Wis. A former Ohio State assistant coach (2011-13) and defensive end (1993-96), Mike Vrabel also made his debut as an NFL head coach in the Titans’ preseason opener.

Sprinkle saw time in the trenches for the Carolina Panthers in their 28-23 win over the Buffalo Bills at New Era Field in Orchard Park, N.Y.

Beyond players from the 2017 team who debuted, a member of the 2016 squad showed out at Heinz Field in Pittsburgh. Before the Steelers polished off a 31-14 victory over the Philadelphia Eagles, former Buckeyes punter Cameron Johnston (2013-16) boomed a punt 81 yards. The play got called back after a penalty, but Johnston stood his ground when he sent the redo 57 yards down the field. Johnston finished the game with six punts for 275 yards, a net average of 45.8 per kick, with three attempts inside the 20.

A penalty took this 81-YARD PUNT from Cameron Johnston off the box score, but this highlight still exists.#FlyEaglesFly pic.twitter.com/sbzSwxPMQH

Across the field for Pittsburgh, former OSU linebacker Ryan Shazier (2011-13) showed another positive sign on his return from a spinal injury suffered in December 2017. Before the game, he was back in the huddle with Steelers coaches and players.